In August 2012 I met a stranger who would change the course of my life. I was in a multilevel marketing business to make ends meet. On that fateful day, I was on my way to the sales office when he stopped me in my tracks.

"Excuse me, do you speak English?"

I glanced up and saw this orang putih, which means a white man in Malay. We do get a lot of tourists in KK, short for Kota Kinabalu, the gateway to the rest of Sabah, Malaysia - formerly known as North Borneo. They come from all over the world to see the elusive orang utan or wildman of the forest, seemingly the most common denominator of their reasons to visit this part of the world.

We were at the Wawasan Bus Terminal. He came the day before from Jakarta, Indonesia. He took a taxi to visit the Sabah Museum and having inspected its meagre collections, decided to hop on the bus across the road back to town. Unfortunately nobody seemed to understand his English accent. He wanted to get a bus to Centre Point. I pointed out the green city buses but warned him of the drivers' tendency to overfill. I said the mall wasn't far and I was going that way. He was relieved as he preferred walking.

When I first met Malcolm, I thought of him only as a business prospect. He looked like Colonel Sanders to the tee; snow white hair, a moustache and beard, a tiny pair of spectacles plus the crow's feet around his eyes. His cargo shorts, a polo checked shirt and an umbrella offered some comfort from the stifling tropical sun.

We walked under a covered path all the way to my sales office, bypassing Centre Point. When it was time to part, I eagerly presented my brand new calling card with the ulterior motive of making him a downline. It was a long shot but one can always dream, I thought. It wasn't long before he called and invited me for coffee. Being rather shy, I asked my friend Mea to come along, not only because she had a Perodua Viva, a small white car, but because she likes to make new friends especially foreigners.

"I only have six days," Malcolm told us. We promised to make his stay a memorable one.

I first took him to an Independence Day party with my business associates. The taxi didn't have Waze nor GPS those days and we got lost. He didn't complain about the extra fare. Mea met us at the party. We enjoyed a roasted lamb and other delicacies and some karaoke before taking him back to his hotel.

The next day, we took him to Lok Kawi Wildlife Zoo. We saw some Asian elephants, the proboscis monkeys, the sun bears, some bored Malayan tigers, the antics of parrots at a show, holding and taking photographs with a large python and a walk on the bridge inside the Aviary, among other things, but no orang utan.

Next we went to Kampung Nelayan at Bukit Padang. The park was a popular hang out for joggers and family outings. There was a restaurant in the shape of a boat in the midst of a lake connected to another with an elaborate wooden bridge. He generously treated us to a sumptuous seafood.

That afternoon, we drove for another hour to the new Tamparuli Suspension Bridge, made famous through a Dusun song by Justin Lusah in 1977. The KadazanDusun is the largest orang asal or ethnic group in Sabah, which I belong to. The first bridge was built by British engineers, circa 1950s.

Local tour guides refer to the bridge as Lovers' Bridge, brought about by a local legend.

In the old days, the KadazanDusun were known as headhunters. The British came and taught us to be civilised. About the time, they were trying to build a foot bridge across the wide Tamparuli River. Each time they tried the strong current washed it away. The officer in charge was Robinson. He consulted a local man named Intang who in turn consulted a bobolian, a local priestess called Odu.  She told them that the spirit of the river, Tambuakar, was responsible for the unsuccessful attempt to build a bridge. To appease the spirit, they must sacrifice a beautiful maiden.

Robinson was in love with a local named Solungkoi. Intang was jealous of their relationship. He was also embittered that he could no longer practice headhunting. He plotted his revenge, persuading Odu to select Solungkoi to be sacrificed. Robinson was determined to build the bridge so he finally consented. Solungkoi was given a drink to make her drunk and she was put inside a huge earthen jar which was placed under the first pillar of the bridge. She woke up and cried for help but to no avail. Before she died, she cursed the bridge would not last unless they spill the blood of an orang putih into the river. Later, Robinson felt remorse and killed himself but not before he engraved the name of his lover on a plaque under the bridge.

Malcolm insisted to walk across the bridge and back. There was a lone dog crossing, hence my photograph of 'a mad dog and an Englishman' on the bridge. Our next destination was the Upside Down House in Tuaran. At the time, there were only five such buildings in the whole world. It was unsettling standing under a ceiling with a toilet bowl above your head. I struggled to keep my dinner intact.

We emailed and when he came back, it was to meet my family. We have crossed many bridges together since then, locally and abroad. I like to think that Robinson and Solungkoi are smiling down upon us now. 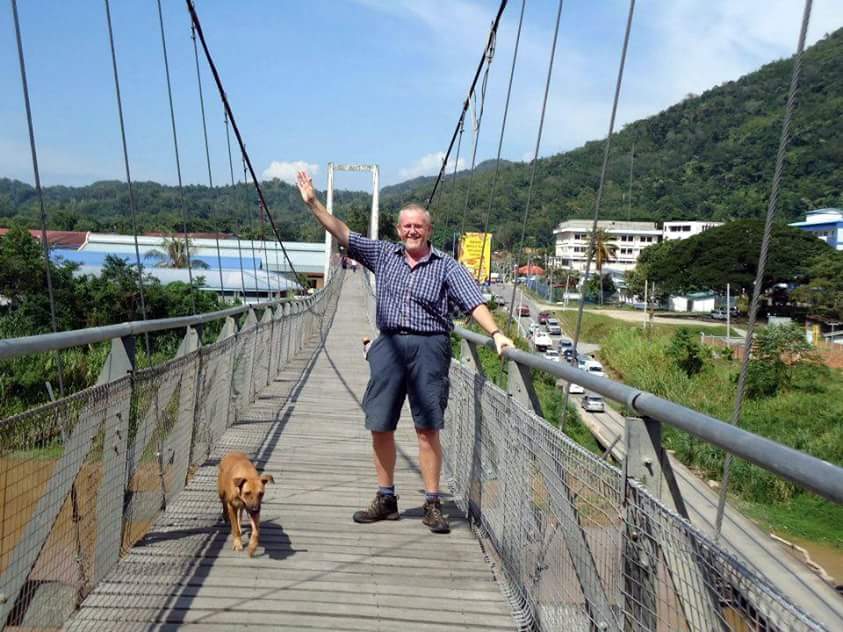 ​Malcolm on the Tamparuli Bridge, Sabah
Add your comments about this story on the Blog page.
​