Checking Out Czechoslovakia – 1990, by Patsy Hirst

​When visiting my friend, Fran, a teacher in Germany, we tried to explore as much as possible in her time off.  Since the Czech border had recently opened, we decided to venture a visit there. We joined a long line of cars at the crossing, and realized the movement was negligible.  While Fran stayed in line with the car, I went inside with our passports to see if I could accomplish anything that way.  The process was surprisingly easy, and after a visit to a couple of windows, much sign language and passport stamping, I changed some money and we were on our way.

Fran wanted to see the country, but didn’t want to wander too far from the Austrian border, as it was unwise to put Czech gas in her car. Thus, as navigator, I chose our route on backroads along the western part of the country, carefully noting each open border crossing along the way.  The roads were good, the traffic light, and scenery most pleasant.  We passed fields of poppies, huge haystacks as well as smaller ones that seemed to resemble people and tents, an old couple struggling to get a heaped wagon up a hill, and women wearing pants under their dress, then an apron and coat.  The frequent villages consisted of drab stucco houses close to the road, but always with flowers growing in front.  When a skyline of spires appeared, we knew we’d reached Znojmo, our destination for the night.

The hotel on the square was full, but we were directed to the Hotel Dukla at the edge of town.  It was a typical soviet concrete high rise, but the drab outside was balanced by the bright orange furniture in our room.  There was an unusual combination tub and sink arrangement, and when I later asked the desk clerk for toilet paper, he apologetically handed me a stack of paper napkins.

Not wanting to waste any daylight, we checked in as quickly as possible, then headed back into town to see what we could before dark.  The gray, deteriorating buildings seemed even less appealing in the dusk, but then we chanced to come into an open square where the last rays of sun cast a golden hue to the yellow brick walls, and beautifully silhouetted a domed church spire.  As we stood on the curb, still speechless at the contrast and simple beauty of it all, a babushka’d old lady walked up, smiled a warm, toothless welcome, handed Fran a bright pink peony, gave a slight bow, and continued on through the square.

Our sunset stroll led us through winding, narrow streets lined with low concrete houses which curved to match the street, creating an interesting skyline of roofs and chimneys.  Looking down one alleyway, I saw what looked like an old-fashioned wooden camera on a stand and headed for it.  Strings stretched along the walls and crisscrossed over the street held an assortment of black and white photos. The whole street and accompanying row of houses were a continuous gray, but this one had the door and window frame painted a dark red.  A pot of bright yellow flowers peeked out of a broken pane.  A single white tile above the door was marked with the number 4, and classical music spilled from the open upstairs windows.

“Do you speak English?”  The question came to me as I browsed through the photos.

“Oh, great,” I thought to myself.  “Here I think I’m really off the beaten path in Czechoslovakia, and some guy from New Jersey is going to come up and ask me where I’m from.”

“Do you speak English?”  This time I turned to see the question came from a young man, wine glass in hand, standing in the open doorway of number 4.  When I moved closer and answered in the affirmative, he gestured grandly with his arm through the doorway.

“This a real Czech house; you may come in and look.”  He stepped back to allow me to pass into the low-ceilinged hallway.  Expecting to find a gallery of some sort because of the photos on display outside, I was totally unprepared for what lay ahead.  A room to the left had some sort of worktable, but it was to the right that my host was leading me.

“This is the bedroom,” he stated.  As my eyes took in the contents – a bathtub, table, and assorted winemaking paraphernalia – a toilet flushed in the corner and a girl emerged from behind the curtain, tucking in her shirt.

“It is also the bathroom.  Would you like some wine?  Red or white?”

It was only now that Fran had caught up with me, and I turned to see her standing in the doorway with a perplexed ‘what are you doing’ question on her face.  By now I had decided we were either going to be mugged or have a really interesting time, and was optimistically expecting the latter.  Fran entered in time to place her wine order, followed by a few other people who appeared from inside bearing clean wine glasses for us.  As our host filtered the wine from the monstrous glass bottle, a couple men passed through the hallway carrying a life-size sculpture of a nude woman and placed it carefully in the next room.

“This is upstairs; you can go up.”  The well-worn steps curved steeply, leading to two doors.  Fran followed me, mumbling something about what were we getting into, through a door to the living room.  A blue sofa and chairs formed a comfortable grouping in front of a fireplace.  The top of the coffee table was covered solid with dirty glasses and ashtrays.  A desk and shelves overflowed with books and knick-knacks, and a small, cluttered bedroom adjoined the living room.

“Sit on the couch.  Coffee?”  We were now, besides Fran and myself, four men and two ladies, all 20-30 years of age.  Our host seemed to have exhausted his English vocabulary with the house tour, and no one else seemed inclined to try, but we were a jovial group and they seemed as pleased to have American guests in their home as we were to be there.  With sign language, charades, and bits of German, we became acquainted.  The blonde girl was a model, the dark haired one an anesthesiologist.  The men’s occupations were technical engineer and power plant firemen.  All were amateur photographers, thus the showing outside.  The man who invited us in actually lived out of town, as did the others.  The tall thin man who lived in the house was the only professional photographer.  He had disappeared through the other door at the top of the stairs, and soon returned with a large tray of bread, meat, and cheese.  The coffee table was quickly cleared to make room, and he sat down in a straight-backed chair, jokingly licked his hands and wiped them across his hair to straighten it, then sat with hands in lap and a shy smile, like a young boy at his first dance.  He had yet to utter a word, yet the warmth of his welcome and hospitality was unmistakable.

We ate, smiled and laughed, looked at the things they showed us around the room (a bottle of vodka, “Gorbachev water”; a small bust of Dubeck, “Czech Lenin”), and accepted the posters they gave us promoting their freedom party.  As the host motioned us into the adjoining room, the blonde girl made us understand that he wanted to give us one of his photos.  He laid pile after pile of them on the bed, encouraging us to choose whatever we wanted.  Fran picked one of the curving rooftops we’d admired, and I took a still life of bread, knife and eggs, which now hangs in my kitchen.  Framed in with the picture are petals from the pink peony.

Working our way out was a slow process amid all the goodbyes, handshakes, and thanks.  Even after we got to the street, they insisted we take more photos from the display.  What a delightful, serendipitous evening!  We were there till 10:30. We shared no common language and exchanged no names, yet we had made six friends we’ll never forget. 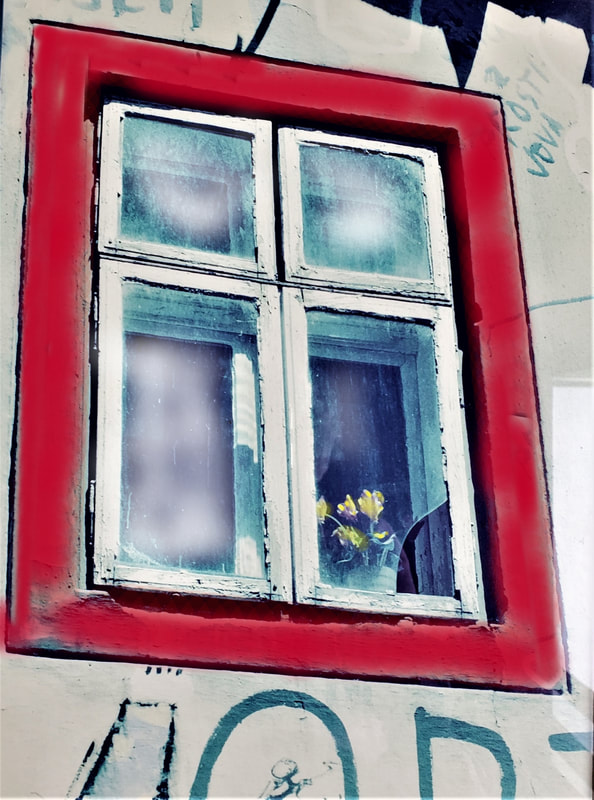 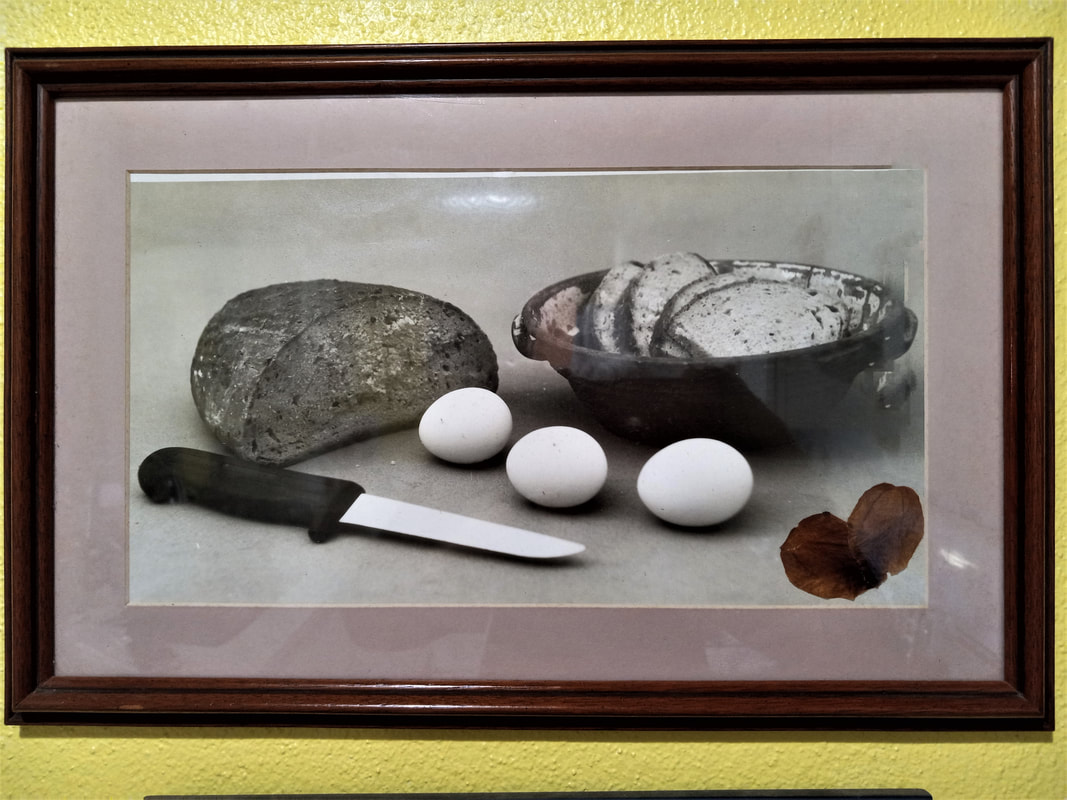