I barely knew my father, he died six weeks after my fifth birthday. I remember a kind man, average height with dark curly hair, a lovely smile and an accent. I know he loved me, this is what I see in old black and white photographs I now treasure.

During my childhood I had always asked if I could have my father’s small oak writing desk one day. Over the years my mother gave me a few of Dad’s belongings; a bible, service medals, an old fountain pen, little else. When Mum went into a rest home and her townhouse had to be sold the desk finally came into my possession. Delivered unceremoniously in the back of an old Honda, the precious writing desk was manoeuvred into my spare room. I ran my fingers over its dusty surface and stood back to admire it with absolute joy. Opening the now empty drawers, I found them lined with old wallpaper from my childhood home. As all the documents and papers had been removed the mystery surrounding my father remained unseen.

I knew he had emigrated to New Zealand from Manchester in the 1930’s. He moved around the North Island working as a farm labourer and milker. He met my mother when he was employed by her brother on their farm near Hamilton. Just as their relationship began to blossom, Hitler invaded Poland. Joining the New Zealand Army as a signaller, Dad fought in North Africa and at Monte Cassino. Wounded after rescuing a fellow soldier who lost both his legs, my father was ill when he arrived home on a troopship in 1945, but soon married my mother.

I remember a man who was always unwell. He swayed violently when he took me for short walks to the cowshed and was often lying down in a darkened room after having a seizure. He could no longer work on the farm. Vague talk of war injuries meant little to a shy red-headed four-year-old gripping her beloved father’s hand.

Excitement and unease filled the house as I heard about the planned surgery which I understood would cure my father. I remember him telling me to look after Mum. Dad disappeared the next day and I never saw him again. Photographs were quietly stored in high cupboards, his belongings were given away, and my father was never discussed in my presence again. It was as though he had never existed.

Growing up without a father was lonely and difficult. Telling people I did not have a Dad was met with teasing and disbelief. Everyone had a father. Secrets filled the cracks and when I enquired about his family, I was told he did not have any. During my teenage years I longed for a strong masculine presence to guide me on my journey to adulthood.

As the years slid by, I thought little about my missing Dad. I am ashamed to admit I told my own children nothing about their grandfather, I really had little to tell them about this shadowy man. Determined to find out who he was, I travelled to Britain in 2007 and was very excited at the prospect of meeting the few members of his family I had eventually made contact with. I quickly became disconcerted and felt uncomfortable at the whispered conversations and private telephone calls among this family of second cousins. They denied that any of the genealogical records gathered by their mother still existed and said they knew nothing about my father. There appeared to be unspoken family secrets and my visit from the antipodes asking awkward questions was not welcome.

A second visit several years later, a week after the desk arrived, was again disappointing. I was concealed behind a curtain of contradictions, secretiveness, resistance and frustrating ignorance. There was little receptiveness to my ongoing quest. I felt so awkward and unwanted I could not wait to leave.

On my return to New Zealand Dad’s desk continued to involve me by its very presence. Dusted and polished weekly, I carefully filled it with my accounts, bills I had paid, investment folders and important documents. An ache to belong and connect to this missing man in my life overwhelmed and embraced me.

Eventually, as no one would help me, I decided to hunt for my lost father myself. I had often been scornful of those who spent every waking moment looking for dead relatives. Reluctantly I began a methodical international investigation looking for any trace of Dad who had a very unusual Christian name. As my search continued, I paused to wonder why Mum had insisted that Dad had no extended family. A chat with her at the age of 101 resulted in being told to “leave the past alone.” Searching online in family genealogical chatrooms, lists and groups I had, within a few weeks, found dozens of new relatives located in Canada, Northern England, the Isle of Man, United States and Australia.

I became aware there must be a devastating reason for the secrecy and family fractures. Several of the people I contacted denied that my father had even existed. One insisted I had the wrong family, even though he had a photograph of my grandmother on his own webpage. I soon received a plethora of daily emails with family trees, photographs, census information, war records, letters and other documents attached. I forwarded many of these scanned documents to one of my cousins in Manchester. She denied everything, declaring I had the wrong surnames and wrong people. Her own mistaken research and misconceptions puzzled me as she continued to close doors which I could not force open. There was obviously a skeleton in my father’s cupboard they wished to remain buried.

Searching late into the nights, I found a grandfather with a German surname, a grandmother who had divorced and remarried, and an aunt who became terribly disabled when she fell down a flight of stairs as a teenager in her home. The mystery of why my father had summarily abandoned his mother, step-father and sister, before travelling to New Zealand, still eluded me.

Then one day the tapestry of life turned over and the knots were revealed. The latest batch of census documents sent from Canada showed that my father’s birth certificate and his age declared on a census did not match. I realised my father had been conceived out of wedlock. Mum finally opened up and explained that his anger when he discovered this and his mother’s response when he confronted her about his origins devastated him. He felt betrayed. Making the decision to leave Manchester, he told no one of his destination and never returned to his home in Wythenshawe again.

My father’s desk, my desk, still sits comfortably in my spare room. I may move it to my office one day. It has unravelled family secrets I have not shared with my English family; the connections remain tenuous. Unfortunately, it cannot tell me anything about my father; his likes and dislikes, the music he loved, what sort of books he read or the food he enjoyed.  I have been unable to garner any further information about him.

I have found someone who will appreciate his writing desk when I am gone. For now it contains my story – the drawers are now filled with my family’s birth certificates, marriage and divorce documents, special letters, photos and mementos. The ashes of my beloved first guide dog sit on the top. It is a testament to my adoptive father’s journey to find a new life and a loving family of his own. 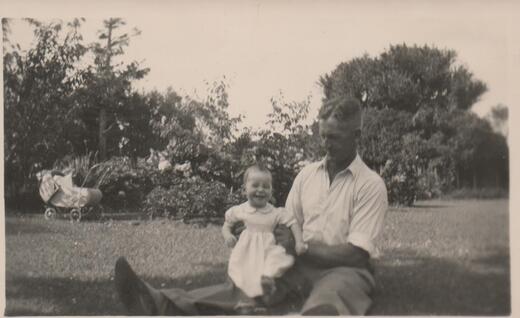 My father and I on our lawn