A BRITISH SEASIDE HOLIDAY IN 1958 by Jill Stoking

We were off! Our family of four, plus luggage, stuffed into the black Standard Eight (FPP 543) for the annual trip to Elmer Sands. We were sharing a bungalow for a whole week with a family of five, who lived just around the corner from us. The convoy, consisting of our car and their Vauxhall Velox, began the journey of approximately sixty miles which would include at least two stops en-route for me to throw up.

Elmer Sands sat between Bognor Regis and Littlehampton, both well known resorts on the south coast of the British Isles. Elmer Sands’ only claim to anything was that it had access to the same stretch of Sussex coastline - the grey pebble beach of the English Channel with its equally grey sea. In the summer the sea might well have taken on a more enticing hue but this was the Easter school holidays - cold with the threat of snow.

We’d stayed at Elmer Sands before but this year we’d opted for a bigger bungalow called ‘OIDUNO’. Four adults, two eight year old girls, two five year old boys and Ian, who was much older (at least eleven) and in my eyes he’d taken on a godlike status. Yes, I was experiencing my first crush - a bittersweet experience, not aided by my mother, who had acquired maths homework from my school, to be completed during the holidays. Her announcement to the world that I was falling behind the rest of humanity due to my ignorance of mathematics was humiliating. I was to be home-schooled for at least one hour every morning, before I could sample the delights of Elmer Sands.

Each day, after breakfast, we prepared for the beach. This was a well rehearsed military operation. The men (Ian included) would take the groundsheets, bags stuffed with towels, thermos flasks, swimming costumes, cups, milk, sugar and biscuits to the beach and stake our claim to a favourable pitch - up against a breakwater that shielded us from whichever way the wind was blowing. Here, the men would lay out the groundsheets, topped with towels and secured with pebbles at each corner. This male bonding meant that the dads would be guarding the pitch throughout lunchtime, while the mums returned to the bungalow to prepare sandwiches to bring back to our encampment. All this territorial aggression and male posturing, even though there was notably nobody else around for miles! But here we stayed, ALL DAY, trying to keep warm by collecting shells, playing with bat and ball when the sea released a strip of sand, searching for crabs in revealed rock pools or posing for the Brownie box camera to prove what a wonderful time we were having. We sometimes even ventured into the sea for a paddle.

My favourite pastime was to escape, with a book, underneath one of the towels. A secretive occupation because my choice was usually selected from an accumulation of reading material left behind, at the holiday bungalow, by previous visitors and even I recognised that these gems weren’t always suitable for an eight year old, which made this occupation all the more delicious. This year’s selection was ‘The Devil Rides Out’ by Dennis Wheatley and I was quite sure it would be high on the ‘Totally Unacceptable’ list.

All this family bonding made what happened to the two five year old boys all the more unlikely, but goes to prove that parental vigilance was necessary, even at Elmer Sands.

They went missing. Suddenly, somebody noticed that the boys weren’t there anymore. There was the usual assumption that they were hiding - difficult on a beach that had it benefited from a shelter in which to hide, we would’ve already been in it! There was a flurry of activity as every adult reached the same conclusion - this could be serious. One of the dads was dispatched to the bungalow to see if the boys had, for some inexplicable reason, gone back home. They hadn’t and panic was beginning to build.

Once you were out of semaphore range, there was no way of keeping in contact with each other in 1958 so it was decided that we would all walk, without getting distracted, for about sixty minutes. If we had no sighting of them in that time, we were all to come straight back to the dad on the beach, who was staying with the camp in case the boys returned. Us older ones (Ian included) were sent to search the beach towards Littlehampton, while the two mums, one of whom was already in tears and fearing the worst, went in the other direction towards Bognor Regis. The remaining dad disappeared to find of a phone box, to alert the police.

I’m proud to say that us older ones (Ian included) found the little brats some twenty minutes walk away. The boys had found a patch of sand in the sun, beneath the protection of the sea wall and were totally immersed in building their version of a model village out of sand, pebbles, seaweed and beach dross. We sat on the sea wall soaking up the welcome warmth of the sun. After all, we now had time to spare. Us older ones (Ian included) never let it show that we’d been scared for the boys. We’d leave that side of things to the grown ups. For that moment in time, we were just enjoying being kids together (Ian included). 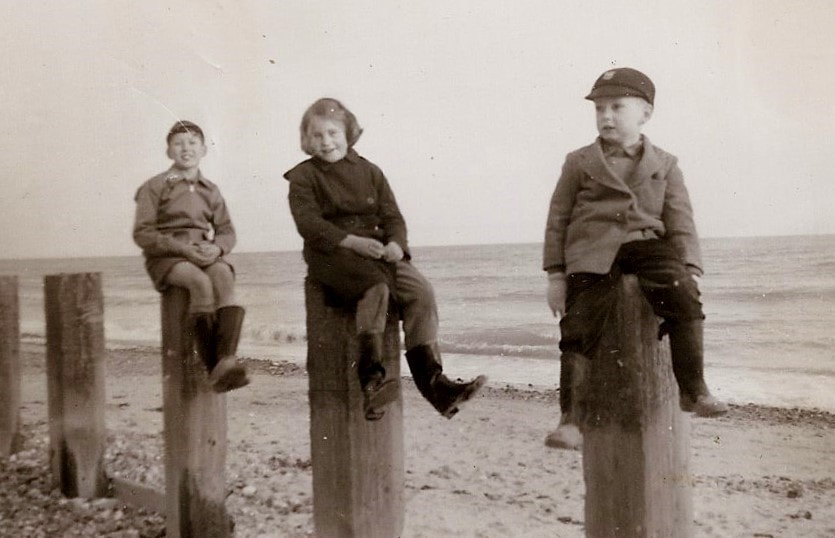