​The Sea Watch by Roger Knight

I first met John Bainton, a wealthy industrialist from Sydney, on holiday in Noumea, New Caledonia. We got talking about boats and he told me about his Second World War Air Sea Rescue Launch that he had partially rebuilt and updated.

I asked him if the bilges had ever been cleaned out and treated with wood preservative, given the age of the boat. He said that he was unaware that they had. As I still had another two weeks of leave, I offered to do it for him, if he paid for me to come to Sydney and provide me with accommodation.

A week later, I was on my way to Sydney. John drove me to Neutral Bay where the Sea Watch was moored. She stood apart from all the other boats in the marina, partly due to her size, 63 feet in length and over 15 feet in the beam, still with her original flying bridge and deck, which gave the impression that she was still in active service.
​
Built in Queensland from Iroko, she had a double planked hull and could reach speeds in excess of 33 knots, powered by two V12 petrol engines. During the war, The Royal Australian Navy had these air-sea rescue boats mostly stationed in Northern Australia and New Guinea. On closer inspection, she looked just like a standard working boat without her mounted guns, a relic of the Second World War, quite out of place alongside the sleek and expensive yachts that she shared her mooring with.

But below deck, it was a different world altogether, replete with indulgence and opulence. The interior was all panelled with teak, where Impressionist paintings were displayed above velvet cushioned couches. What would have been the original sick bay in the stern, had now been converted into a boudoir, complete with a four-poster king sized bed. It looked and felt more like a floating penthouse, rather than an ex naval workhorse. In the engine room, were now two 500 hp Mannheim diesel engines, which enabled the Sea Watch to travel faster than Sydney’s police launches at the time. Despite the upgrade though, many of the original features had been retained, including signs and switches, creating an interesting collision of old and new, functional and ornamental.

I was in awe that this was going to be my temporary harbour residence, my maritime retreat, my fleeting opportunity at feeling a sense of achieving some childhood fantasy.

The real thrill though of being aboard this boat, was taking it out through the Sydney Heads, notorious for their huge swells. Like riding a roller coaster, its streamlined hull would crash down into a deep wave trough and then the boat would power back up, with her decks almost submerged at first and then the sea would cascade past you. But standing up on the small flying bridge, you felt like a maestro on his podium, in control of all the surrounding elements. Once through the Sydney Heads and out into the wide expanse of the Tasman Sea the boat began to show her prowess. Her ability to match her strength against that of the sea and not be at all cowed by the larger waves and deeper troughs came to the fore. This work horse of the sea was really being put through her paces. With one hand on the wheel and the other on the throttle I began to feel a sense of omnipotence and a total dissipation of the ills of the world that had been left behind on the land. I was now in a newly discovered space, master of all I surveyed, imbued with a newly found confidence and certainty.

At sea, the Sea Watch had become a miniature battleship, which reinforced a sense of her invincibility, fuelling an overwhelming exhilaration at the same time. Sadly though, the last I heard anything of her, was that she had broken her mooring up at Palm Beach and had run on to the rocks, damaging her hull, at which point, I think John had sold her on. I often wonder who might be caring for her now.

In the brief time, that I had known her, the pleasure she gave me was immense and quite unforgettable. She had given me a peak maritime experience that had uplifted me, taken me to such a special place. She had given me something of a post operatic high, that made me realise how much I had suffered a stunted vicarious existence, silenced my passions, and limited my gestures. She had transformed the ordinary and mundane into the extraordinary and remarkable, providing a new dimension to the meaning of fulfilment. It was a bit like hearing an aria for the first time that stops you in your tracks and makes you homesick for something you never had and long for. 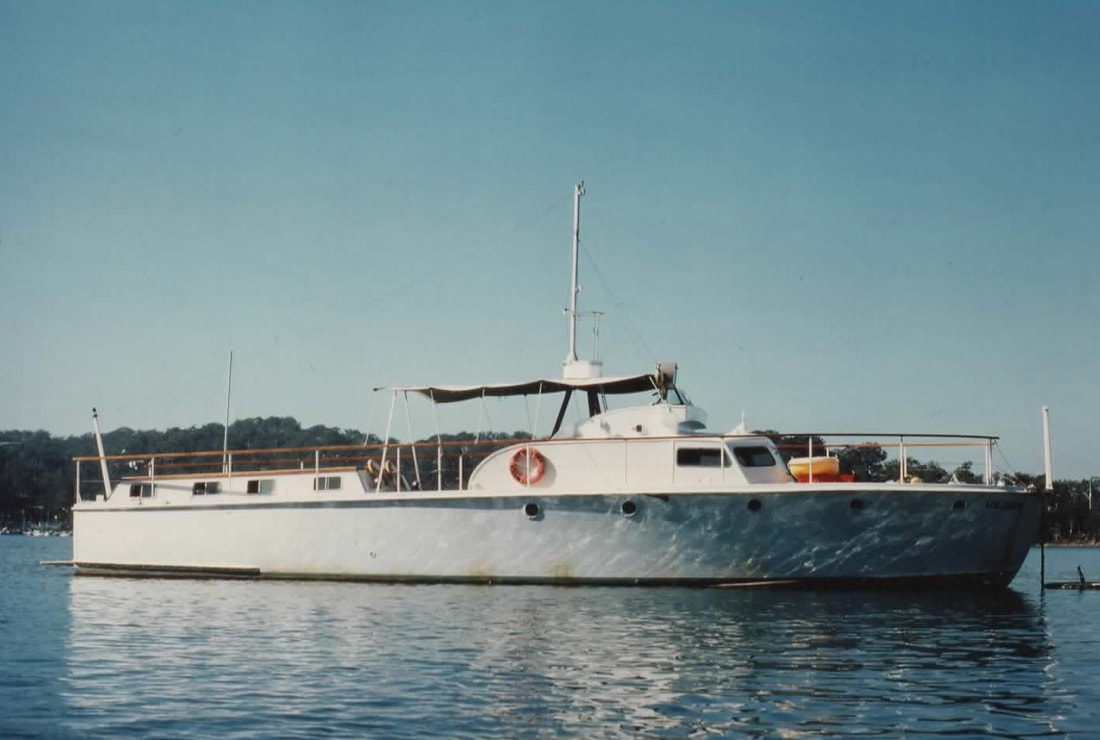