Never ask God to give you anything; ask Him to put you where things are.–Mexican proverb

“As so many have done before me, Phoebe the Cat and I arrived in San Miguel de Allende to begin a new life in the Colonial Highlands of old Mexico.” So began my first newspaper column for Aténcion San Miguel on my expat experience.

I did feel quite proud of myself for accomplishing this move on my own, and beginning a new life in a country where I couldn’t speak the language. The truth was, it was exciting as well as challenging. I had been learning these past ten years since my husband’s death that if I wanted something I had to go after it. Nothing wonderful would just fall in my lap.

Vicente was waiting for me with his taxi at the Leon airport holding a sign with my name as prearranged by my new landlady. The road to San Miguel was long and dark and Vicente drove carefully, mindful of the topes (speed bumps) in the middle of seemingly nowhere, and the dead animals by the side of the road. The lights of San Miguel gleamed in the distant hills out of the shadowy countryside, so very different from Los Angeles.

Soon we bumped along on the town’s cobblestones, surrounded by adobe walls and a few old-fashioned colored Christmas lights.. I gaped at a man in a sombrero and serape in a small plaza before we climbed up the hill and stopped in front of my new Mexican home. I carried Phoebe and Vicente brought in two suitcases. “But where are the purple bags?” I asked in panic. We searched the car uselessly, frantically.

My carry-on bags never made it out of the Leon Airport in Mexico—the bags where I put everything too important to be checked. I must have turned my attention to Phoebe, and poof, everything changed. And the timing couldn’t have been more poignant--it was right before Christmas.

I went to bed but couldn’t sleep. I only tossed and burned with worry about the loss of my irreplaceable belongings. I pictured someone picking up the bags, searching them for things to sell, and tossing the rest out the window of a pickup truck on some dusty Mexican road. The image of my family photos blowing through the cactus just made me sick.

This new loss after so many recent losses in my life caused me to mourn for days. I went to lovely St Paul´s, the gringo Protestant church, and prayed to accept the inevitable.

The day of Christmas Eve, the town was full of people carrying baby Jesuses hurriedly through the streets on their way to all the Nativities where the Holy Child would later appear in ceremonies that included rocking Him in cradles of lace to lullabies. Poinsettias, or noche buenas, were everywhere—in fountains, in hanging baskets, lining stairways and courtyards. In the central Jardin, there was a living Nativity scene in the bandstand, with barnyard animals that children could pet. A tall young man encountered two nuns in their full white habits walking ahead of me on the sidewalk, and kissed their hands. I overheard him say, “Me encanta… me encanta,” and the sisters smiled and laughed, not immune to the charms of a handsome man.

I took the bus up to the supermercado on the hill and bought some underwear and makeup, although all of the shades were too dark for my very white skin. Guards with automatic weapons stood by the check stands.

The bus was decorated with crucifixes and images of Our Lady of Guadalupe, and a boy dusted off the windows at major stops and then collected the fares in a plastic bucket.

After five days, acceptance of the lost suitcases was growing. At least I still had Phoebe. I certainly would not have traded her for the missing bags, or anything else I didn’t have. I figured this was another example of how we don’t need things, how we are here not to accumulate but to live and do. Looking around me at the poverty of the Mexican and indigenous peoples gave me a new perspective.

I was sick and tired of loss, but wasn’t this an experience in how to live on my own? We come with nothing, we leave with nothing; we can’t take it with us, possessions are just a burden, etc. All the clichés spun around in my head actually making me feel better.

Early Christmas morning the phone rang: "Cherie, your bags are here!" It was a lady I had met at a Christmas party, calling from the Leon airport on her way to New York.

Twenty minutes later Vicente and I were tearing along the empty Christmas morning road to Leon. At the airport we searched fruitlessly through the lost luggage only to find a similar purple one, probably what my new friend saw.

Vicente also wanted to check in Customs up by the gate. When we approached, we saw my orphaned bags behind locked doors. There they sat, both of them, like my oldest friends in the world. Traveling unlocked with me on the plane, now they sported plastic security seals. I offered a tip, but the officials waved it away, smiling at the tearful reunion of a gringa and her stuff.

Vicente and I laughed all the way back to San Miguel where, after cutting off the plastic locks, I found everything completely untouched.

Those five days without the security blanket of the cherished contents of my bags gave me perspective. I could have managed without them, I had been managing. It had not been the end of the world. I had even learned something about myself.

Vicente invited me to his extended family’s Christmas celebration that night. But that is another story of milagros, magical realism, and me in Mexico. 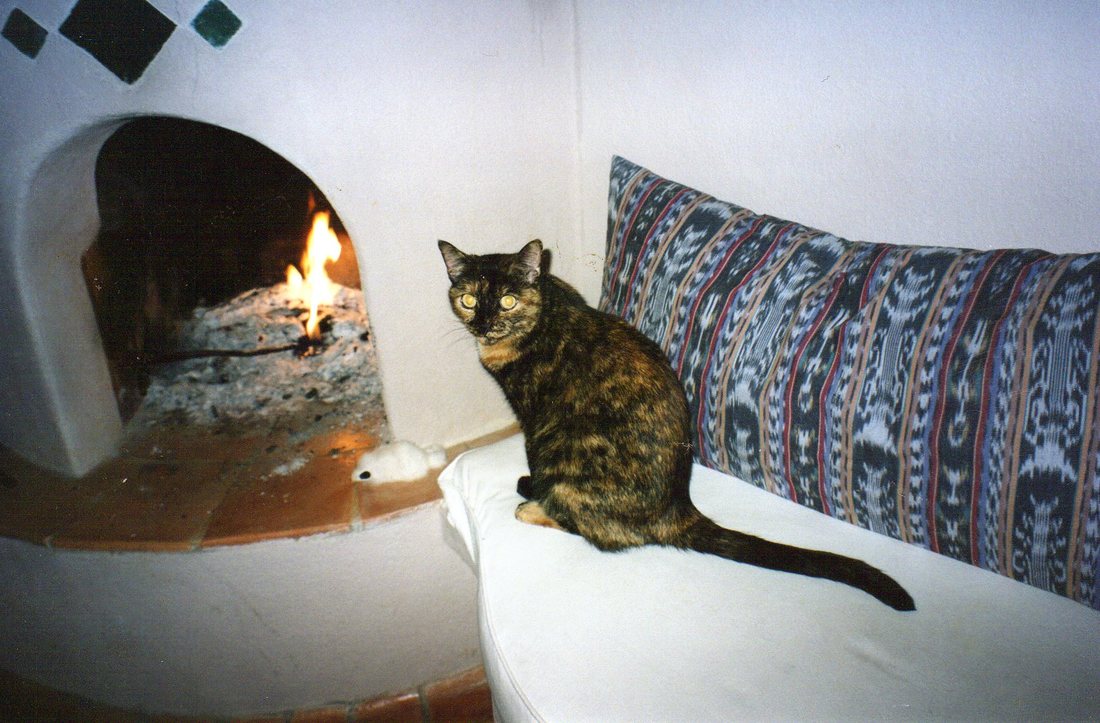 Phoebe the Cat in Mexico
​
​Add your comments about this story on the Blog page.
​