​Strange School of 67 years ago by Carolyn Muir Helfenstein

Onward across the province of Ontario. We were determined to visit all our old haunts; we knew western Ontario so well. It was here my husband and I met and had gone out on a blind date in 1957. So much had changed since. We were now close to the one room school house that I once knew as Strange School, my School.

“Would you like to stop?” How had Harry read my mind?

We knew exactly where to turn on King Side Road where I lived on the Gillham farm and we had gone out on our first dates. Oh, those dates! We turned once more first, to see tiny Laskey where some of my poorest students had lived. They had walked side by side up that hill to #4 Strange School each morning, north of King Sideroad. The owners of the beautiful homes in Laskey now in 2022 that had taken root since my two years at ‘Strange School’ in 1955-56, probably could not have ever imagined that some Laskey families struggled there to put food on the table, when those families called Laskey ‘home’.

But I knew exactly where to find my school. It would have been called the new school, a long time ago. Harry wheeled our Kia into a rough driveway and stopped when a young man appeared from behind a car parked nearby. We were in the school yard.

Strange. My school still stood there where youngsters had played and where I had taught school. No swings now, no sounds of laughing children. But maybe running water.

He was a young man, working clothes, but not a farmer I guessed, though it was still farm country. New homes were winning the race, farms were disappearing; I knew that would have happened. He was pleasant looking, casual, but was he going to ask us to leave? He approached our car as Harry rolled down his window. I had no idea who this man was. Of course not. Sixty-six years had gone by.

Would this be the sign to leave? Private property? We were silent as he drew up to the window that Harry had rolled down. “Hello folks, can I help you?”

That was a surprise.

Silence. Harry was stumbling for the right words. How could he cover nearly 70 years in one sentence?

Bravo, Harry, this would get us in. Seniors we were, and we have learned to take advantage of it.

This man was beginning to win us over; he was smiling. He rubbed his hands on the rag he has used while fixing that car. He pointed to Strange School. I was slipping back many years. A blue sky, not even a breeze. Not a single car drove by. Now I was back in 1956.

“Well, you see that door over there, just go on in. They’ll be happy to show you around.”

***
​We were dumb struck, but we wasted no time. We were soon walking up back steps I did not remember. “Hello!” Harry called. “Anyone here?”

An equally youngish man but in office clothes appeared. He seemed pleased to see us, the same causal approach, the smile. Even if we were not his customers Harry spoke up and told him our tale. A brief story. Soon we were shaking hands with his colleagues and they asked us to look around their offices.

I was trying to find my classroom.

They fell silent as I began, “Where’s the blackboard?”

“Yes, that was the blackboard, and there were the kids.” I was visualizing them all.

“Grade one here by the window, grade two here and grade three.”

I was placing them in their chairs in their rows. I Then the fours and five.  I looked at the far side and could imagine the stage where we once practised for a vocal competition in Toronto! We won second prize. Was I imagining that. But then I remembered the words to our song:

And then in the sky was a rainbow. Yes, yes.

Then there was the spelling competition between parents and kids. The kids won, I remember. And the regular ‘map game’.

S.S. #4 was becoming a shared treasure. For them, these men were listening and living the history of the building they owned and I think they loved, but maybe now they could imagine the kids at their desks. We talked and shared, they told us their stories. Their goals.

They seemed to be soaking up every word I said about the past so they could remember it. It seemed important to them; I could tell they were new to Canada I gathered my story was very important to them. They were building a new Canadian industry, and I had told them of their past.

We drove away, almost purring, we were so happy. Not so strange.

We were to witness a wedding soon after that, my grandson and his wife, theirs was a future; and today, what had happened at my strange school house was that by stopping where we did, we had introduced these very kind men of their very important past.

I forgot to tell them, I had learned back when I was a young teacher, that it was a man named Strange who first settled on this road.

A Strange School.
​​
​Acknowledgement: Thanks to Celestino Pariselli and his colleagues of PAR-BRO DESIGN/BUILD LTD. for their wonderful hospitality that day as Harry and I went back in time. For us to discover that my school was home to another generation of young Canadians building their future in what was Strange School, was heartwarming. 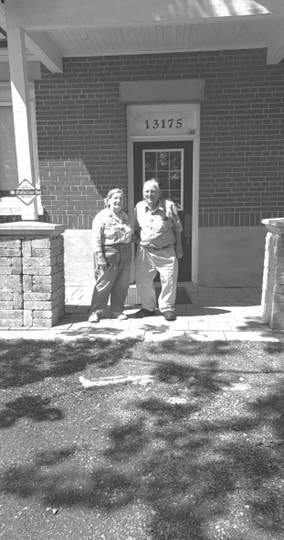 Harry and Carol Helfenstein in front of what had been SS#4 Strange School as they visited the new owners.
​(Taken by Celestino Pariselli, July13, 2022 of PAR=DESIGN/BUILDLTD).