​Tiger, the American adventurer in Cuba by Denis Dextraze

​Tiger was a cool laidback American cowboy in his late thirties from the mountains of Montana.  The way he rode his chopper reminded me of Peter Fonda in the famous movie Easy Riders.  The difference in the looks was his golden moustache which he wore like a trophy, the kind of moustache that draws attention to women.  And, in those days, women in Cuba were easily attracted to foreigners whether they hid their inviting smile under a flashy mustache or not.

He and his buddy, Jimbo, would sometimes ride to Havana and only come back a day or two later.  I am sure that the marina DTI, the local secret police, was aware of their whereabouts.  They were monitoring every foreigner in Marina Hemingway, especially American citizens.  Indeed, they were all potential spies.

Between 1998 and 2000, during the latter part of the Bill Clinton administration, the U.S. rules about Americans boaters visiting Cuba were relaxed and my sailboat was surrounded by boats with U.S. flags. The Cuban authorities welcomed these illegal visitors with open arms and willingly rang the cash register.  Commodore Escrich, a Cuban military officer in charge of the Yacht Club, organized fishing tournaments and one sailing competition to lure more Americans into Cuba and it worked.

Before the new Bush administration cut off this illegal traffic, I participated in the only sailing competition on Tiger’s boat which was better suited for racing than my big 45 ft. ketch.  There isn’t a boater in the world that can imagine that you can be prisoner of a marina. Indeed, boating and especially sailing are the essence of freedom.  In Marina Hemingway, if a sailor wanted to go out for a day sail, he had to go through the same lengthy procedure with the coast guard, immigration, customs and marina management as if he left the country definitively.  This meant hours of frustration watching the coast guard and customs search your vessel and making sure that the Cuban search parties did not walk away with your pills or your cellular phone.

Commodore Escrich had a lot of pull.  He knew Fidel Castro personally.  He had an official car with a chauffeur and was allowed to travel outside Cuba at will.  He somehow got the Marina watchdogs to ease off on the exit procedure during the competition. The only requirement was that the boat owner had to supply the authorities with a detailed crew list 24 hours in advance and submit to a coast guard search.

Tiger was ecstatic!  Finally, we could get out of this prison and enjoy a day sail!  Wow!  He started inviting all his friends including some Cubans.  The permission for his Cuban friends was turned down except for Jacky, my Cuban spy-girlfriend. At first, I thought that she got the pass on account of the introduction letter from the Canadian Embassy.  I later found out that the Cuban Party was involved in granting this very special permission for a Cuban non-military national to board a foreign boat in the marina.

Indeed, when the Cuban authorities found out that she was going out with a foreigner, the secret police went to her place of work and her neighborhood to investigate her.  I was really worried about that but she was not at all.  She told me that her father was an executive in the Juventud, an organization in charge of indoctrinating, not to say brainwashing, the Cuban youth.  He lived in Alamar on the top floor of one of those badly constructed post revolution buildings which were now crumbling.   He had access to Party privileges and slept with a 38 revolver under his pillow. She was herself a secretary with the CDR, Spanish for Committee for the Defense of the Revolution.  Have you ever watched the movie Sleeping with the enemy?  I kept very close ties to her family but I started sleeping with only one eye closed.  I knew that I probably had a spy on board but I figured that I could turn that situation to my own advantage by getting acceptance from the local authorities.

We left to join the race long after it had started because of the late arrival of Greg Biniowsky due to lack of transportation (we called that the Cuban Factor).  When we finally made it to sea, the boat looked more like a refugee charter than a competing racer.  There were bodies everywhere; full cockpit, top deck loaded and even people overflowing inside the cabin.  But, who gave a hoot? We had the sun and a warm steady breeze.  But mainly, we were free to sail with our friends and we had two cases of cold beer and a bottle of rum. The hell with the race! Let’s have a good time.

When the competition ended and the boats went back to the marina, Tiger decided to jive back for another pass in front of Havana and then again for one more pass because we had not yet run out of beer. At one point, we had to stop sailing because a few “happy passengers” decided to jump overboard for a swim.  We were only a few hundred feet from shore right in front of the downtown Malecon, the Havana boardwalk.  Cubans on shore were excited and were shouting to let them on board.  They never saw a boat so close to shore right downtown.  In the meanwhile, the VHF had to be disconnected to shut-off the Coast Guard calling constantly on channel 16.  When we ran out of beer and finally made it back to the marina, Tiger had to confront them and report the VHF malfunction…  I don’t think that he was convincing because Escrich never organized another sailing competition. I believe that he thought that all foreign sailors were bums.  He was right.  No doubt that in those days, whoever was living on a boat in this Cuban marina was an adventurer. So was Tiger. 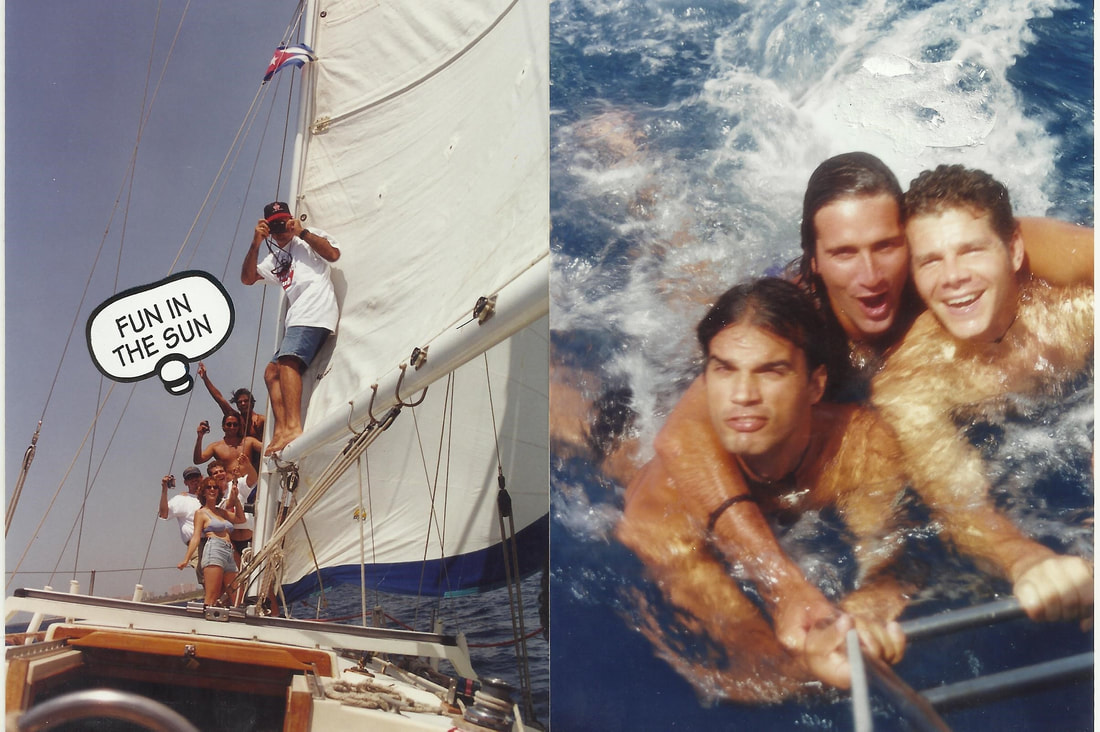 The Crazy race on Tiger’s sailboat