"Of course! Of course!" they boomed, opening a rift in the silence we'd drifted through over the past few weeks. One of the two men in the group tried to hide us beneath his armpits, under his bulky brown jacket. "Come, no one know," he whispered.

But there were rules: "I sorry. Too many people for tiny boat," explained the Captain. "You wait. When others on boat, we see."

Then: the waiting, on the dock, one long leg stretch from freedom, from the laughing and smiling stretching the faces of this group of pious Russians who’d just finished a three-day pilgrimage to one of their holy sites, the Solovetsky Islands, and were now leaving, without problem—it was then we saw the futility of steps towards freedom, if the final lunge is never taken. Staying in your tent, with the gooey mud mushing beneath your backs as you rolled over in your sleep and your money dwindling like the lemon-colored leaves falling from the poplars and being cold and shivering and afraid you’d never escape this island this cold this foreign, open-air prison. Staying there, in all that, would be the same as having made it this far and not taking that final lunge. Being cold, and shivering, and listening. Listening to the mud squish beneath your back. For a week. For two weeks. Watching the lemon-colored leaves twirl downwards and stick in the mud. Bronzing as the days went by. Wondering if you, too, would soon be like that lemon-colored leaf. Bronzed. Forgotten. Hopeless. Stuck in the mud that squished beneath your back as you rolled around, cold, shivering. For weeks.

"All right, come come," the captain acquiesced, his hand outstretched for us to take that final leg stretch, to metamorph into part of them—the jolly, laughing, leaving group. “But you hide until open sea. Yes? Understand?”

And then we met her. Ludmila. Her name formed to her. As if she’d chosen it. A sky-blue platok swaddled her chubby face, like little blue riding hood, ostracizing a forehead full of curling ashen bangs.

“What her name?” the older little-sky-blue-riding-hood pleaded, using a much frailer woman’s legs as cushions. Almost laying, to get closer.

Her face spoke before she did. “That Russian name!”

“She’s so krasivaya,” she continued, staring at Vera, her eyes gleaming with memory, wet with the past. Perhaps a daughter. Or a daughter that had been, before. "I'm Ludmila."

"Ochen priyatna. I'm Ben. And yes, she is beautiful," I agreed. Me, too, now gazing at her, filling with memories. The tent, the twirling leaves. The squishy mud. Now it would be a story. Our story.

The small boat spit and popped into action, gurgling water, as we crawled away from the dock. The pink horizon melted, on the milky, smooth water out the submarine windows behind our heads. Long wrinkles tightened in the sheet of brightening silk behind us, opening.

"I sing her song," Ludmila declared.

Five Russian ballads later, Ludmila having closed her eyes and touched her chest, then Vera's chest, in multiple songs, as if to say, you don't need to understand the words: feel them—after all that, we inched across the open sea, the back end sagging into the water, ten people over capacity. A trail of white diamonds on the choppy water, left behind by the sun, led to a hazy island. And after the captain ducked his head into the small wooden door where we were smashed between these women and said we could come out now, we could come out of hiding, we saw the trailhead of the white diamonds beaming on the sleek silver railing, glittering where we discussed life and love and religion, with Ludmila.

Me translating, Vera nodding, asking me to ask.

And, like that, discussing love, life, religion, with Ludmila, who’d only been one of many hands inviting us onto a boat, exactly two hours ago—like that, we distanced ourselves from the silent scream of the Solovetski Islands. From the shrinking promises of religion. From the soon-to-be-leafless trees, wooden fingerprints against the marmalade skyline. Harbored from the islands’ ambient past, by the warmth of a Ruskaya dusha.

The same Russian soul which had steadied its flame in Solzhenitsyn, too, during his imprisonment on these very islands. A stay which had reminded him what's left after all else is stripped away: “know languages, know countries, know people.”

And for the first time in weeks, no longer trapped, certain of not being stuck in the cold, and the shivering, and the mud, on an island off which we’d been told no boats would depart until summer, six months from when we’d arrived, for the first time since then, we hugged and took photos with “others who were alive, who were traveling [our] road, whom we could join to [ourselves] with the joyous word ‘we.’” 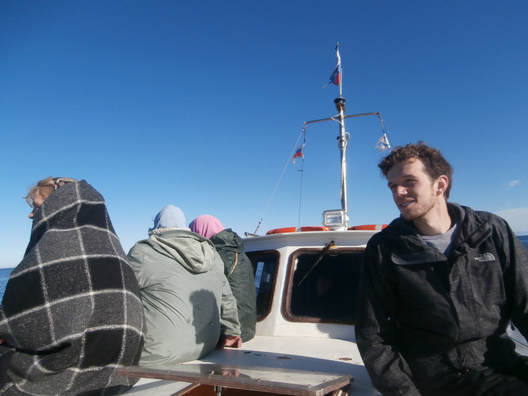