BUYING A VEHICLE – AN URUGUAYAN EXPERIENCE by Syd Blackwell

Before I left Canada, in 2007, I sold my Toyota 4-Runner to my friend.  We drove to the nearest Insurance Corporation of British Columbia office.  I surrendered my registration card and insurance papers, and my friend provided his driver license.  The agent asked me if I wanted to change the plates and offered tools.  I agreed.  By the time I returned to the office (less than 15 minutes) the transfer was complete.  My friend had a small paper receipt for his VISA payment, a new plastic registration card, insurance, and he owned the vehicle.  That was it!  Fifteen minutes.

In late June 2018, we sold our Renault Clio to a used-car dealer in Solymar, a coastal community near Montevideo, and purchased a Mitsubishi truck from the same business.  The Mitsubishi had had only one previous owner.  As long-time residents of Uruguay, we knew that the process of purchase could only be completed when the escribana (notary) had completed research work to produce the sale documents.   However, we took possession of the Mitsubishi immediately.  As is the system in Uruguay, we would drive under the registration of the previous owner until the paperwork was completed.  Why under the registration of the previous owner if the truck had already been purchased by the car dealer?  Well, the dealer does not want the bureaucracy and expense to change the registration, so the vehicle just remains in the name of the seller until a new buyer has been found, the paperwork done, and the registration completed at the local municipal office in the department (province) of the buyer.

So, a bit more than six months later, we received notice from the dealer that the papers were ready for us to pick up.  Good thing there had only been one previous owner, or it might have taken a lot longer!

Armed with our new bundle of papers and our cedulas (identity cards) we visited the local intendencia (municipal office), where we expected to get a new registration card in our name and new license plates to replace the Montevideo plates on the truck.  We did not think this would be difficult.

We quickly discovered we were wrong.  First, we needed photocopies of our cedulas (even though dozens of other copies are already buried in files in this building), the current vehicle registration card (even though that actual card would also have to be surrendered), the insurance document, a utility bill in my name (to prove residency, even though we pay property taxes in the same office), and, five pages of the car purchase papers.  We also had to have an inspection of the vehicle.  I left in search of a place to make photocopies.   A few drops of rain were falling.

When I returned with all the copies, about ten minutes later, the rain had not ceased, but it also had not increased.  I was not prepared for the announcement by the vehicle inspector and the young woman clerk that the inspection could not be done that day because of the tormenta (thunderstorm) outside.  They said the engine would get wet and they could not accept that responsibility.  We were incredulous.  However, it was clear that the firmly standing, cross-armed inspector was not going anywhere.  We left the office in disgust.

When we had purchased our Clio, a different (and nicer) inspector from the intendencia had recorded both engine and chassis serial numbers, checked headlights, tail-lights, signal lights, emergency lights, and spare tire, and confirmed we had a regulation first-aid kit, emergency road triangles, and a fire extinguisher.  I expected the same process when we returned to the intendencia the next day.   As soon as the inspector caught a glimpse of our Mitsubishi, he said “no”, pointing to the so-called “off-road bumper” on the front of the vehicle.  He ordered it to be removed. He said it was illegal in the Department of Canelones (but apparently legal in the Department of Montevideo where the truck had previously been registered).  He then got the serial number from the engine.  That was it.  Nothing more.  We returned to the office where I told my wife we had to get the front bumper removed to pass the inspection.  She demanded to know why.

The inspector told her it is proven that when a car with an off-road bumper runs into a person at 40 km/hour, the person always dies, and without the bumper they usually survive.   We instantly realized that no such study has ever been conducted and this ridiculous story was either the official reason concocted by mindless bureaucrats or a purely fantastical attempt by the inspector to have us comply with his demand.  It didn´t matter.  We again left the office in frustration.

At our neighbourhood garage, our friendly mechanic removed the offending bumper.  He was not surprised by the demand.  While working, he offered numerous negative comments about the car inspector and the mindless bureaucracy of the intendencia.   We agreed.   We returned to the office for another inspection.

As the inspector and I approached our vehicle, there was another black Mitsubishi truck parked two spaces away with a local license plate, and a front bumper just like the one I just had to remove.   I pointed that out to the inspector.  He responded with just one word, ilegal.   I instantly realized that the bumper rule was completely arbitrarily applied, just like the helmet rule on motorcycles.  I was also pretty sure I could get our mechanic to put our bumper back on with no consequences, as the inspector had no further interest in this other illegal truck.

However, he quickly found a new problem with our truck.   The front license plate was not the original.  It was an exact duplicate, but printed onto thick plastic.  We had never noticed.   As a consequence, we were told we needed to go to the police to report the copy plate and have them issue a statement that would remove any responsibility from the intendencia should the original plate reappear somehow.  The origin of this plastic plate is interesting.   The photocopy is actually impregnated into the plastic; it was not just some adhesive cover.  Who has a machine capable of printing such a copy?  We are guessing the plastic plate was actually an official replacement of some sort.  The Solymar dealer had not noticed the plastic plate either.

Our seventh time entering the intendencia, with our old plates in hand, was successful.  We had no more hurdles.  We received our new plates and left.

There were, of course, many fees attached to the process, and we were characterized as foreign troublemakers by the supervisor of the inspector and office clerk, but we finally had our vehicle legally registered and licensed.   All that remained was to get a new electronic pass for the peáges (toll stations), but that business was with a whole different bureaucracy.

When we arrived in Uruguay, a dozen years before, the nation was beginning a program to provide a free computer to every elementary school child, so the nation could become computerized.   Even the youngest of those students is now beyond high school.  I hope some of them might be allowed to change the system before we have to purchase another vehicle! 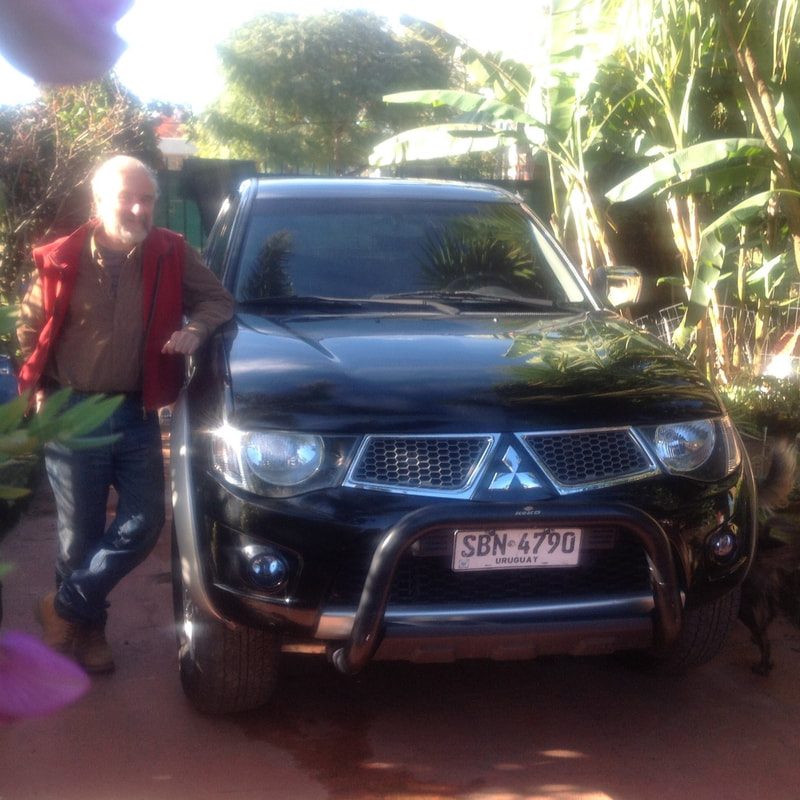 Below is an excerpt from an article I wrote in 2009 for a now defunct Uruguayan online magazine.  It describes the registration documents that eventually came after the purchase of a Renault Megane with several previous owners.

“The documents, enclosed in a pink cardboard cover slightly longer than standard paper size, were a shock. There were 50 printed pages in the folder. On those pages, there were a total of 27 stamps affixed and (an amazing) 70 signatures. No wonder the process took so long to complete. It would seem that half the government had to see, approve, and sign the documents. The registration services of the escribana added a further $350 to the price of the vehicle. While not an outrageous fee for all that work, the process seems needlessly complex in our modern world.”  (Ola Uruguay, Issue 30, 09/18/09).