While I have had many incredibly huge moments in my life, including getting out of an abusive marriage, finding and marrying the love of my life and having two beautiful, healthy children, there are two life-changing moments that I feel helped empower me and define me as a woman.

The first life-altering moment was the evening I discovered I had an eating disorder for over thirty years of my life.

From the age of nine, until just shy of 40, I stuffed my face nonstop with food on too many occasions to count. I lived to eat and thought of food obsessively.

Talking to friends at a party was merely tolerated until I could get to the dessert table.
Hovering around the dessert table, then hoarding the treats off in a corner was my main objective.

When we threw parties, I couldn’t wait for the party to be over to scarf down leftover desserts.
Then I would lie and say I stuffed the desserts down the garbage disposal or threw them away outside.

I wore clothes that stunk because throwing them in the wash after numerous wearings would shrink them, and I couldn’t afford to buy new clothes.

The self-loathing I felt was immense, but I was powerless to stop eating. It controlled me.
Looking at my undressed self in the mirror each night, I swore at myself and promised that I would do better and eat less the next day. Sadly, that rarely happened.

The night I randomly heard the words “compulsive overeater” on television was my “ah-ha” moment. I believe that ideas are presented to you for a reason at certain times in your life. When you are ready to accept it, you hear the idea.

Upon listening to those words, I went to my laptop and started Googling. I quickly found myself on the Overeaters Anonymous website. The website prominently asks – Are you one of us? It asks questions such as “Do I go on eating binges for no apparent reason, sometimes eating until I’m stuffed or even feel sick? “Do I have feelings of guilt, shame, or embarrassment about my weight or the way I eat?” “Do I eat sensibly in front of others and then make up for it when I am alone?” I answered yes to these and so many more of the questions.

It hit me – I am a compulsive overeater. I have a sickness. I have a mental illness. I need help. From that moment on, I attacked this eating disorder relentlessly. I went to OA meetings and therapy. I read books about recovery and penned an anonymous blog. I committed to recovering and am now over 12 years recovered.

It wasn’t easy, but I went from a life of being controlled by food and living to eat, to eating to live, and I am profoundly grateful and changed for the better.

The second life-changing moment came about two years into my recovery. I had always been an athlete when the world of triathlon came knocking on my door in the form of a fundraiser. For those who don’t know, a triathlon is a race of different swimming, biking, and running lengths, always in that order. While I had been a runner for over a decade, I had never seriously biked or swam. I decided to step out of my comfort zone.

I started with the sprint, or the shortest triathlon distance. I had a friend who mentored me in running years prior, who also happened to do triathlons. She pointed me how to get a training plan and gave me a lot of direction on proceeding into the sport.

I found that I loved training and the structure I was required to follow. The sprint distances were over in less than two hours, so after two summer seasons of sprints, I decided to move up to longer distances, which required more training and more endurance, which appealed to me.

A couple of years after that, I opted to do the longest race – a full distance Ironman, which include a 2.4-mile swim, a 112-mile bike ride, and a 26.2-mile run, one right after the other.

If you asked me five years earlier if I would ever attempt a full Ironman, I would have said you were out of your mind. But I loved everything about triathlon. It filled me in mind, body and spirit. It helped cement my recovery because I quickly learned that whatever I ate ultimately affected my training or race performance. It also gave me a passion that took up a lot of brain space, pushing food out. It touched my competitive spirit and changed my body with all the training I did.

My first full Ironman was in June of 2015. It was so hard. Though we swam in a bay, there was still a strong current, making what should have been calm waters very challenging. The bike portion was known for its flatness, which is wonderful for a beginner. However, powerful headwinds made the 112-mile ride ever more laborious than it already was. During the last few miles I told myself I was never going to do this again.

When I got into the changing tent after the ride, to get ready for the run. I sat down and caught my breath. I had an internal dialogue going on in my head.

I’m done, I can’t do this anymore.
But your husband, kids, and so many friends already stationed along the run to cheer you on.
I know, but I’m so tired, how can I possibly run a marathon now?
Don’t quit, you’ll regret it.
Quitting would be sweet relief.
Ronni, you are not a quitter. Everyone is waiting for you out there.
You can do this.
No, I’m not a quitter. Yes, I can do this.

Off I went onto the run course. I saw my family and friends. Each time was glorious because I got to stop and give them sweaty hugs. I could feel the blisters forming on my feet, I knew I was dehydrated, and my legs hurt from doing so much work. I told myself – one and done, just finish.
And I did. And it was amazing to be done.

A few days later, when I was back to 100% physically, I finally was able to absorb the enormity of what I had done fully. It felt so empowering. I took on a big, hairy goal and nailed it. It wasn’t pretty, but I had done it. I realized that if I could finish an Ironman, I could do anything I set my mind to and reiterated those words to my children. I know that today, the same as the day I finished.

With my eating disorder behind me, and having the knowledge that I can do really hard things, nothing can hold me back in pursuing my dreams. 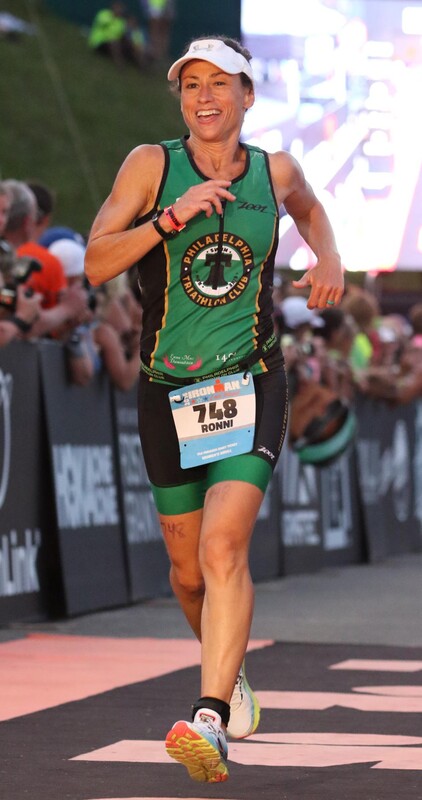