​A Once Upon A Time True Story by Mike Cavanagh

Soon after, Mike moved to Canberra, on the north island of Australia (people there call it the mainland, but people in Tasmania, ‘Taswegians’, really know it’s just ‘the north island’) across the bit of the wild Southern Ocean called Bass Strait. He was no longer Ranger Mike, but Public Servant Mike. One day, four years later, Noel, still a Ranger in Tasmania, rang and said:

“Hello, Mike! It’s Noel! I’m visiting in Canberra. Can I come and visit you?”

So Noel went to see Mike.

After they’d said their hellos, they quickly found out that they were both going overseas – and much further than across the bit of the Southern Ocean called Bass Strait. All the way to the other side of the world! They tried and they tried to see if they could arrange to be in the same places at the same times, but no matter how hard they tried, they couldn’t make their itineraries fit. So they said goodbye.

Mike and his lovely girlfriend Katie set off on their adventure to the other side of the world, the United Kingdom. In the middle of their adventure, on Monday, the 26th of July 1993 in fact, Mike and Katie stopped and booked to stay the night in a wee little village called Loch Kishorn on the western edge of Scotland. They had to stop, because if they didn’t they would have run into the loch, then floated out to the bit of the Eastern Atlantic Ocean called The Minch and on to America. They didn’t have visas for America.

After they had unpacked, Katie said to Mike,

“Let’s go for a quick drive before tea!”

At the end of the winding, winding little road up to the top of the steep, steep hills, Katie, and Mike said:

There was a little parking area, just big enough for Mike to park the van next to a little red car that was already there. So they stopped to rest.

Mike had noticed something on the ground as he parked, so when he got out he went over to take a look. Do you know what it was? Well, you’ll never guess in a gazillion years, so I’ll tell you: it was a camera lens, and not just any camera lens, but an expensive 18 to 55 Pentax lens with lens caps still attached.

“Oh!” said Katie, “Perhaps those people way off at the other end of the bridge might own it, and the little red car, and maybe the 18 to 55 Pentax lens with lens caps still attached fell out of their Pentax Camera bag when they hopped out of their little red car?”

Mike looked way over there, and just as Katie had said, there were two people just about to take the corner of the path that wound under the bridge and away yonder. Not wasting any of the precious two seconds he had before they disappeared, Mike called out:

Mike always knew exactly what was just enough at times like this. The first person must not have heard, because she (Mike thought she looked like a she) had now disappeared around the corner and under the bridge. But the second person (who Mike thought was a young man) stopped, and seemed to be looking in Mike’s direction. So he called out again:

“Oi! Have you lost an 18 to 55 Pentax camera lens with both lens caps attached?”

The second person seemed to be still looking but didn’t say anything. Mike thought that perhaps he was a kindly visiting foreigner and might not know much English (well, he did look a bit scruffy and had a woolly beard, so you never can tell!). So Mike shouted:

Mike’s interpretive skills won the day, and the rather scruffy looking and woolly bearded young man was slowly walking back along the bridge. Even the first person who was probably a woman… yes, she had re-appeared. It had worked! Good on you Mike!

As Mike watched the somewhat scruffy woolly bearded man walk towards him, he noticed that the fellow had his head hung down, and was shaking it slowly, from side to side. It was just as he had thought, the fellow didn’t understand English, but Mike’s “Oi!”-ing, and pointing and clicky clickies had won the day! Then the fellow looked up, as he was now only five meters away.

As he looked up, the fellow said:

So that was how at 5:45 p.m., Monday the 26th of July 1993, Mike met Noel in a little car park, just big enough for a little red car and a van, at the end of the little winding, winding road at the top of the steep, steep hill overlooking a wee, wee village of five houses half way around the world. Mike took a picture just to see if it was true. And here’s the picture. 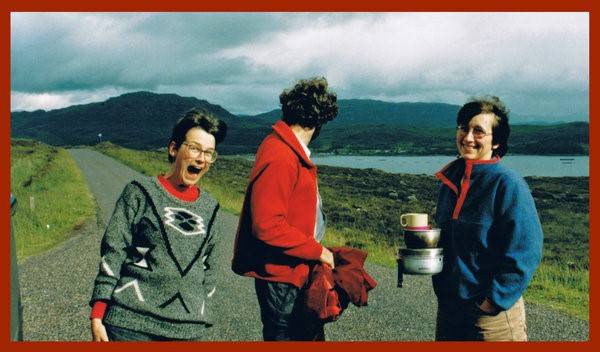 ​But in the end, Mike didn’t give the 18 to 55 Pentax Camera lens with both lens caps still attached to Noel. Do you know why? Well, it didn’t belong to Noel at all. So Mike and Katie met up with Noel and his girlfriend in the middle of almost nowhere just because of a silly mistake.

So, the moral of the story is; sometimes somethings just have no meaning at all. Well, I think that’s what it means.