Fa’afafine or Faafetai?
When something gets lost in translation!

Different countries, different language and different cultures are the things that make travelling interesting. If everything was the same as at home, then what’s the point of travelling.

As a nation, New Zealanders tend to be drawn to other places, often to find out more about their own roots, or out of curiosity. For those of us who live in the northern parts of New Zealand, we are lucky to live with people from a wide number of different ethnic backgrounds. Naturally, we also have a high Pasifika population, so, when our ship docked in Pago Pago, in American Samoa, there really was a feel of home for me.

When we dock in a new place, I like to get up on deck early. This day was no exception. The wharf lay below us. People were getting ready to set up the market place that was for our benefit. Huge bags of colourful t-shirts and lava lavas were being hauled out of cars. Bright shirts with flowers of the islands were waving in the wind. Beautifully woven bags and baskets were laid out on tables ready for the onslaught of tourists.

Beyond the gates that would lead us out into the real world the island rose up towards the sky. A pathway could be seen up through the bush to a memorial that was on top of the mountain. One of our friends had already decided that would be a great place for a bit of a run. At the base of the mountain were the trees where the fruit bats were hanging and screeching out to one and other. Every so often they would suddenly take flight, then settle back down in the trees.

Time for breakfast. We poor half starved passengers like to make sure we are not going to faint with hunger! Over breakfast I check out the “Daily Planet” (my name for the newsletter that is put in our cabin each evening telling us the next days activities ) to see what’s on the agenda for the day.

As we are in port, there’s a brief history of the island, places of interest and useful phrases. This is about the time I let out a bit of a snort, have another look to see if I’m seeing right, then burst out laughing.
Talofa lava - hello. That’s fine.
Fa’afafine - thank you.
Oops! Last time I heard, that was the name given to what is known as
Samoa’s third gender.

Well I carried on with my breakfast, as you do, then thought I had better make my find known. I had this vision of some people having quite an interesting day if they used their handy language guide, so, down to the reception I went.

“Good morning, Madam,” I was greeted with by a young lass behind the counter.

Me, “Good morning. Is the “Daily Planet” written up on board?”

Young lass, “No ma’am, it’s all done from head office.”

“Well,” said I, “there is a mistake here. They’ve put fa’afafine for thank you, and that means…”

“Do you speak Samoan, Madam?

“No, no,” say I, “but in the school where I teach, we have a lot of Samoan kiddies, and you do pick up some key words.”

Sceptical look from the young lass. “Madam, if you take this piece of paper, can you write it all down.”

“Certainly.” And off I go with my piece of paper and the pen she also thought to give me.

Well time ashore is precious, and by now to was a bit late to let the passengers know there was some dodgy translation on their sheets, so it wasn’t until later in the day that I sat down with my ipad and Mr Google to check and make sure I hadn’t got it all wrong. But no, I was right.
Fa’afafine - 3rd gender - a male raised as a female. Faafetai - thank you.

I wrote it all down and I took it back to the desk. There was a different girl on this time. I guess the first one had gone ashore to practise her Samoan. When I explained what it was all about, she just burst out laughing - and did anything come of it? I’ve no idea. But if you happened to have been in Pago Pago that day, and wondered why you were getting funny looks, this could be the reason why. 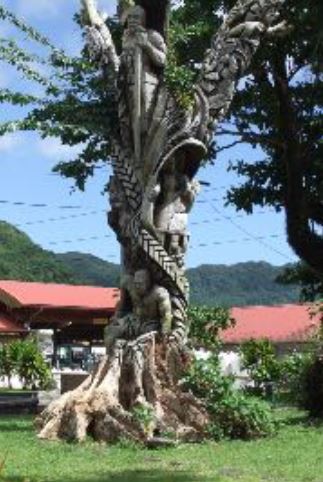