I pressed play on my phone with one hand, while my other hand held the cold, lifeless flesh of my father’s hand in mine. The room filled with the words I had heard in my head for the last few days.

`Oh, Danny boy, the pipes, the pipes are calling
From glen to glen, and down the mountain side.
The summer's gone, and all the roses falling,
It's you, it's you must go and I must bide.
But come ye back when summer's in the meadow,
Or when the valleys hushed and white with snow,
It's I'll be here in sunshine or in shadow,
Oh, Danny boy, oh Danny boy, I love you so’

I had awoken from a deep sleep a few nights previously feeling a sense of overwhelming sadness with these very words on endless repeat inside my head. I remember telling my husband, that the time for Dad to depart this world was near, somehow I had been told. Dad’s suffering would soon be over and I instinctively knew it to be true. I downloaded the song `Danny Boy’ to my phone, I knew what I had to do when the time came.

And now here I was, alone in a hospice chapel in Wellington, sitting next to my Dad’s pale, lifeless body. I let the music and the words fill the room and fill my soul, calmness washed over me, I felt strong and supported. Someone above had prepared me for this moment. I gripped Dad’s hand and leant over to kiss his cheek, gazing at his face in desperation, trying to remember every detail of his features, I needed to remember them for eternity, for soon they would be gone forever.

I whispered to Dad `It’s OK, you can go now, you are free, don’t worry about Mum, we will take care of her, we will all be OK.’

I felt a sense of relief that he was at peace and no longer sick. As `Danny Boy’ drew to a close I held Dad’s hands in mine. His hands looked thin, emaciated, these were not the strong hands of my Dad. My mind wandered back in time, I had been the apple of Dad’s eye and he was my hero. I drove Dad mad with my larrikin ways, joking around and acting the clown, I followed him everywhere. Being an Irishman, growing potatoes and pottering around in his vegetable garden had been his joy. But even here he got no peace, for I followed him, happy just to be in his presence, soaking up his tuition on how to grow potato’s, thinning the carrots and nipping out the tomato laterals. Oh how I wished I had paid more attention. For now I would have to figure things out for myself!

While Dad had been ill in hospital, the asbestos filling his lungs, he refused to let go, he had something to live for. It was late September and soon it would be time to plant the spuds. Finally Dad had been released, weak and terminal, but there was something he needed to do. Within days he was in my garden, it was important to him that he pass on his knowledge of growing potatoes. Mum fussed about him over doing things, as we ensured my son did the digging.

If only I had paid more attention to the potato planting process, instead I was focused on indelibly absorbing the image of my Dad standing in the dirt, wearing his usual white cloth hat and checked shirt. My son now towering over him in height, standing beside him in the dirt, being instructed on the magic art of making mounds. I had wanted to store this image in my mind for eternity alongside the memories of me as a child, floating around the garden with my Dad.

As Danny Boy finished, satisfied that I had carried out the task I needed to do to send this Irishman safely over yonder, I gave Dad one last kiss on the cheek, turned and walked away, knowing it was the last time I would set eyes on my Dad.

Later that night when Mum was home alone with her thoughts and facing her future alone, something strange happened. The outside light at the back door came on, detecting the presence of someone or something. Mum nervously checked outside, there was nobody about, she went back inside, but the light repeatedly flickered on as though someone was standing there. Each time she looked there was nothing there, this was unusual. The light had never done this before in all the years Mum and Dad had lived in that wee house at the beach. When she told me the next day I had a feeling it was Dad, calling by to say a last goodbye and to let Mum know he was OK. It never happened again.

That was in 2018 and eventually it came time to plant the seed potatoes. I couldn’t remember a damn thing, just something about mounds, did you plant them into mounds or mound later, how deep do you plant them I wondered? The potato crop was a dismal failure. But often when pottering about my vegetable garden, I hear Dad’s voice on the wind and in my head, whispering `those laterals on the tomato’s need pinching out girl’ and `thin the carrots’ not to mention `for goodness sake stake up those beans.’ I smile and do as I am bid. Working in the garden brings me closer to Dad. While tilling the soil I feel his presence right there with me. In the garden I am alone with my memories of childhood and following my hero around the garden, my Dad.

But Dad, please could you just whisper the instructions for the potatoes again?
​
Sharon Hayhurst 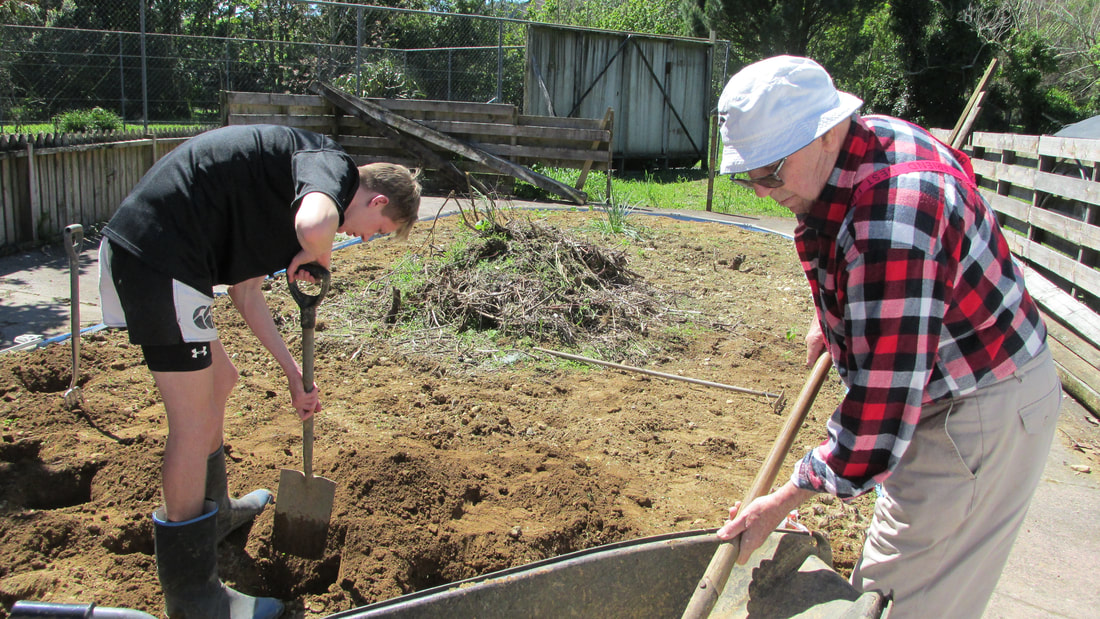