​The Day I Met a Future King by Susan Mellsopp

“Here’s Prince Charles’s friend” said everyone as I walked into the country meeting. I had no idea what they were talking about. Flourishing the latest copy of the Waikato Times under my nose, I was stunned to see myself, my daughter, and Prince Charles on the front page.

A neighbour and I had travelled to Tokoroa the previous day to see the Prince at the Showgrounds. It was 1981, just before his marriage to Diana Spencer who had stood tearfully on the tarmac as he left for distant climes. In July I sat and watched their wedding at St Paul’s cathedral with the same neighbour. They had a colour television, we did not. I had made and iced a wedding cake so we all partied on fruit cake and champagne. If only we had known what the future would bring.

Standing among a large crowd of royal enthusiasts, I was completely unaware I had been photographed as the royal of the moment walked past. Yet this was not my first encounter with the British royal family. At the tender age of one I had been taken in my pushchair to see the Queen and Duke of Edinburgh on their visit to New Zealand in 1953. Elizabeth had become Queen just 15 days before I was born. I wonder how many other tiny girls staring up at the royal couple had, like me, been endowed with the middle name Elizabeth in her honour.

Several years later when the normal mode of transport to visit their antipodean subjects was to arrive regally in the royal yacht Britannia, I was taken to Tauranga to experience another touch of royalty. I remember little of this visit, although I took some photographs of the royal yacht sailing past her loyal subjects standing on the Mount as the yacht left for its next destination. Enthusiastically following every step of the visits of the royal family to the far-flung corners of the world was seen as normal. We also read stories about them in the New Zealand Women’s Weekly and avidly absorbed any news on the radio with the latest information about their lives in palaces we hoped to visit one day. Many decades later I stood outside Buckingham Palace watching as people arrived for an investiture, and stared at the paintings by famous artists hanging in Windsor Castle. While I was there the Queen arrived as the flag went up on the turret.

My next royal adventure was a visit by the Queen Mother in 1966. She came to view the newly established Waikato University. Armed with my camera I stood at the entrance on Hillcrest Road waiting for the family matriarch to arrive. Driving past regally in a large black car, presumably a Rolls Royce, I was thrilled when she waved in my direction. I stayed glued to my spot until, following her tour of the new institution, she left smiling sweetly.

In 1970, the Queen and Duke visited again for the James Cook Bicentenary celebrations. They brought their teenage offspring, Charles and Anne, with them. We were granted permission to close the public library where I worked for several hours and join in the celebrations at the Te Rapa racecourse. I suspect it was a rather overwhelming event for two British teenagers with crowds of young people staring at them as they walked along a designated path lined by adoring kiwi teenagers.


When Prince William was a baby his parents brought him to New Zealand. Taking the children out of school we travelled over to see Charles and Diana in Tauranga, much to the consternation of the headmaster who did not agree with our decision. Four very excited kiwi farm kids watched the royals as they drove past, then joined the large crowds in the far-fetched hope of meeting them. They were extra excited when we went out to the airport to see the royal couple fly back to Auckland to be with William. The close-up view as they walked across the tarmac and boarded the plane was worth the long day out. I seem to remember Diana wore a white two-piece outfit.

Rushing off to stand for hours waiting for a quick glimpse of a royal has lost much of its appeal in this far flung corner of the Commonwealth. Their visits are short and restricted to just a few towns and venues. This means most of the population has no opportunity to see them, even if they wish to do so. One friend was so excited that the Duke and Duchess of Cambridge were coming to Hamilton in 2014 she invited me to go with her to meet them. The lovely thought was my guide dog might attract them to speak to us. Unfortunately, I was going overseas to a wedding and was unable to attend, but my friend was immensely excited to tell me how tall and friendly they both were.

Will there be a royal tour in this Platinum Jubilee year? Perhaps Prince Edward might like to return as I doubt he has been back since his sojourn at Wanganui Collegiate. If he brought his family with him that would be an added bonus. I am sure the public might turn out to see one of the few younger British Royals who seldom travel this far. The lack of awe and respect for these privileged people who live in large houses and palaces rent free still seems strange to those of us who grew up in the age of royal adoration. Having been photographed with a future king, I do hope I live to see him enthroned.
​
​Photo courtesy Waikato Times 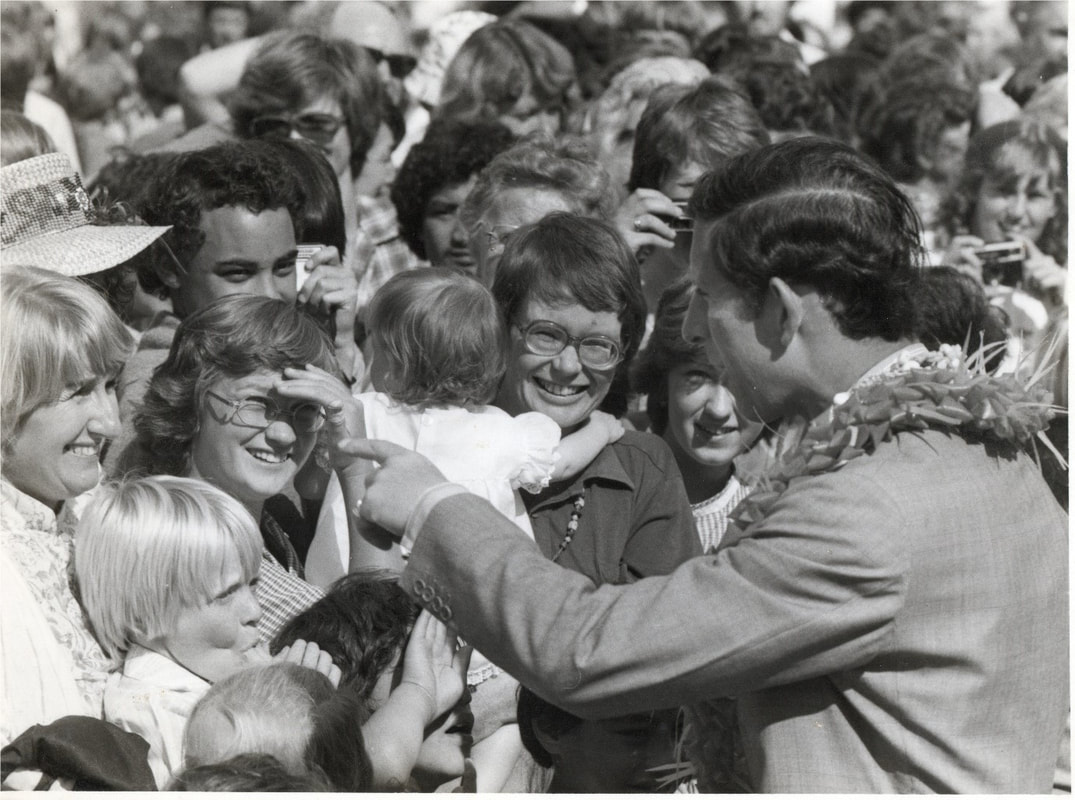