​Across the Pond by Sue Bavey

​My husband and I moved from Kingston-upon-Thames, UK to Boston, MA in December 2003, due to the small technology startup he was working for being taken over by a company based in Framingham, MA, and his subsequent transfer. We were offered redundancy or relocation, along with two other employees and decided we would see what Massachusetts had to offer us!

On arrival I was immediately struck by the incredibly cold temperatures (with wind chill taken into consideration it was as low as -30 deg C on a couple of days during that particularly harsh winter!). Secondly, I noticed the familiar place names around us. We began by renting an apartment in Brighton, not a seaside town as in England, but a small suburb of Boston populated mostly by students from the nearby Boston University. Similar to the English version, Brighton has many bars and restaurants and a lively nightlife, which being relatively young and not yet having children, we made the most of. Over the Charles River from Brighton is Cambridge, where both the illustrious Harvard University and MIT (Massachusetts Institute of Technology) are located. Boston is part of Suffolk County, but nearby we also have Lincoln, which is part of Middlesex County, Bourne in Barnstable County and many other names no doubt chosen by the pilgrims to give them a sense of home after they fled religious persecution in England.

Since moving to Boston, leaving family and friends behind, I spent a fair amount of time imagining what it must have been like for those first settlers, having made their way thousands of miles across an unforgiving Atlantic Ocean crammed tightly together on board a ship rife with disease, full of hopes and fears for a future in a brave new world. When we made our move we of course had the advantage over them of being able to email or telephone our friends and family and our journey back home is only a seven hour flight as opposed to two months by ship back in 1620!

Plymouth, where a replica of the Mayflower (built in Devon, England) can be visited, is not too far from my current home in Franklin, MA and is one of my family’s favourite day trip destinations - not least due to its shop selling British chocolate and a newly opened British Afternoon Tea Room!

Plymouth is also a popular field trip destination for local schools and I went along with my son as a parent chaperone when he was about ten. We travelled by school bus inhaling diesel fumes along the way and trying not to feel sick or get a headache from all the excited shouting emanating from the rambunctious ten-year-olds! I gained a ton of respect for the school bus drivers that day - they have to put up with this noise level every morning at 7.00 am when most of us are starting to think about coffee and toast!

On arrival in Plymouth, we clambered out of the bus and made our way to the replica of the Mayflower. The interior of the ship really brought home to me how awful it must have been living on board for seven to nine months after arriving, while a suitable site was sought out and simple dwellings were built. Due to the harsh New England winter the pilgrims were forced to shelter in the confines of the ship until the spring, having arrived in late autumn. They shared their tiny space with animals and many of their number died before they were able to move onto the land and start building a community of homesteads. 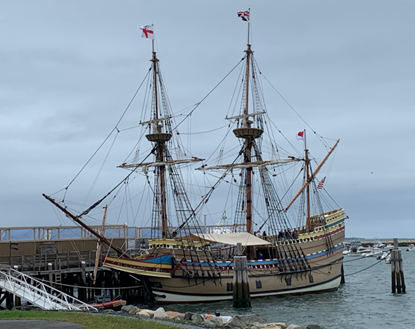 ​The town of Plymouth now has a lovely sea front with clapboard houses and a beautiful sandy beach. However, back in 1620 it must have been mostly pine forest full of unknown flora, fauna (including bears) and a fair few daunting looking members of the local Wampanoag tribe of Native Americans.

In addition to the Mayflower II, the modern-day Plymouth, MA is also home to a very popular historical tourist attraction called the “Plimoth Plantation”, a village museum in which all the employees wear seventeenth century clothing and speak with a curious accent which sounds very rural, almost Cornish, and is supposed to be how the settlers would have sounded. You can visit houses which are supposed to be replicas of the dwellings from the original settlement built by the surviving pilgrims. They are very small houses built from felled trees with mostly only one room containing table and chairs, fireplace and wooden beds. The costumed actors pretending to be the owners of these houses are happy to answer questions and display skills such as weaving and candle-making, skills which became necessary to the survival of the pilgrims. These actors are not allowed to speak in their normal accents but have to stick to the weird old-fashioned British they have been taught.

In fact of all the American states, Massachusetts is said to have the most similar accent to a British accent. I am afraid I have to disagree. The accent sounds very harsh to me and is definitely not a favourite - also which particular British accent is it supposed to emulate - they are many and varied?  I have managed to resist losing my British accent, even after eighteen years living here and I still have difficulty understanding the Boston accent occasionally and often need to ask waitresses to repeat the specials two or three times before I have a clue what they are offering me! Having said that, similar problems with accents have occurred to me in England as well. On my first visit to Newcastle with my husband (then boyfriend) he had told me that a lot of Norwegians went to the University of Newcastle and as we sat in a cafe I asked him if the people around us might be some of the Norwegians he had mentioned, since I could understand nothing they were saying. “No, those are Geordies speaking English,” he replied in a condescending manner.  Ah well, at least the Geordie accent (native to Newcastle) is well known for being a difficult one to understand!

My communication difficulties are not confined to my inability to understand the locals over here either, they sometimes don’t seem to understand me too well, despite always saying how much they love my accent! Americans from this area seem unable to pronounce the ‘you’ sound in tuna, emu, etc and when I ask for tuna as a filling for my bagel I invariably end up with chicken. Occasionally I remember that this might happen and put on a Boston accent, asking for ‘toona’. I have also started asking for ‘tomayto’ as it is much easier than suffering the uncomprehending stares when I ask for ‘tomahto’. My kids have learned to switch between the two accents as the whim takes them. They speak to my husband and I and our expat friends with a British accent, but when I am driving them with their friends somewhere it sounds very odd to me to hear them chatting away in a broad Boston accent. At least they will not have my menu problems and will get tuna whenever they order it!