​Typhoid; or, a prosaic illness in India by Philip East

‘Stop crying!’ exclaims the flustered nurse as she drives the needle clumsily into her patient's hand, ‘Why are you crying!’

The young barefoot boy in a loose-fitting shirt and torn trousers, a hospital porter of sorts, idly scraping the filth from under his fingernails, looks up disinterestedly. The nurse cannot find the vein, yet undeterred she continues to strain, tugging and pulling at the blackening skin. Sobs turn to screams, ‘Stop, stop, leave me alone!’

These cries, from my beleaguered girlfriend, Carla, worn out after two weeks of unbroken fever and crippling lethargy, punctuated only by these occasional visits for treatment, are too much. I stagger back as the affronted nurse storms past with her assistant, roused into action at last, in tow, and collapse in a chair. The heat, the screams, it is all too much. The sordid walls smeared by countless dirty hands begin to spin…

The beginning of this tale, the introduction that led to the chaotic scenes described above, is much less dramatic. It begins in Diu, an enclave to the south of Gujarat, in India. A former Portuguese territory, Diu is very much the lesser known cousin of Goa to the south. Yet with a pretty coastline, a mammoth fort, and lots of lovely little Portuguese streets with their stone crosses and Virgin statues that light up at night, it is a peaceful and pleasant setting -- and a rather fitting one for the onset of typhoid. For it is in Diu that Carla’s symptoms developed; as gentle sea breezes blew through the whitewashed streets, the Salmonella Typhi bacteria multiplied. Nothing explosive, just the calm and gradual increase of fever.

With hindsight, I somehow thought typhoid would be more exotic and terrible. In the West, with our injections and our tablets and our sterile environments, we only have an exposure to serious communicable diseases through history and the media. Epidemics ‘rage’ and people are infected by the thousands, all sallow-faced and poverty-stricken. Yet Carla seemed alright really, the same pretty girl whom I love; perhaps a little tired and worried, after all, a prolonged high fever is never a good sign, but not on her deathbed by any means, especially in such a tranquil setting. Yet sickness became routine, a routine of simmering fear and constant wistfulness, from which the only relief was the hospital.

Though new, the hospital at Diu contains in microcosm all the dogmas and chaos that India is built upon. A small hillock of beaten sandals adorns the entrance, each patient diligent in their removal as they would at the temple or mosque. Moving further in, beyond the occasionally staffed desk, a long corridor of shaky metal seats acts as a disorganised waiting room of sorts. There is no order here, a doctor is prescribed, but when they see you, if they will see you, is left open, just like the doors. People barge in and wander out at leisure, as ladies in blue-pop and cherryade pink saris wander by with sloshing mop buckets. When at last a doctor is procured the diagnosis is never the same. Sometimes typhoid, sometimes not. More blood tests. More urine samples. More confusion. The attempt at intravenous antibiotics on the third visit was the last straw however, it was time to leave.

We could have gone to Mumbai, with its superior healthcare and stifling May humidity -- a tropical jungle of concrete where everything has a price: and quality is certainly not guaranteed. But the heat and risk, after weeks of fever already, seemed too much. Instead, it was back to the sterility of Europe, cleanliness being a blessing when the fragility of human life becomes so apparent. Of course, it seems selfish to have the option to run away, but the sense of relief was palpable, the shedding of a heavy burden. Escape yielded results as well, a stringent series of tests and a strong course of antibiotics were all it took, and just as it started, typhoid slowly faded away.

Despite what happened my memories of Diu are fond, if somewhat vivid. I can still see the giant leathery bats surging from the forest at dusk, wave after wave of squealing dark forms swooping low over the rooftops; or, meandering by the great Portuguese fort, the surf fizzing and crashing into the bastions below, gentle herders in their bright red turbans, grizzled by the sun, stop to chat amid the arid scrub and tinkling of bells. Scenes of utter melancholy, a fitting word, perhaps, for typhoid.

Now, with two years already past, people still recoil and seemed shocked that we left India because of typhoid. It appears so extreme, so dangerous, so exotic? And although it is true that sanitation and healthcare are indeed appalling in India, shocking even, it is also true that these diseases we fear so much from afar are ever so prosaic and commonplace in reality. The day before we left Diu I wandered from our guesthouse to a small restaurant where I often took breakfast. Already dripping in sweat after a brisk walk in the fierce, grey Indian sunshine of Summer, I chatted with the waiter. Mentioning the possibility that Carla had typhoid he recoiled in shock. And yet, when I, taken aback inquired, ‘But is it rare to contract typhoid here in India?’ 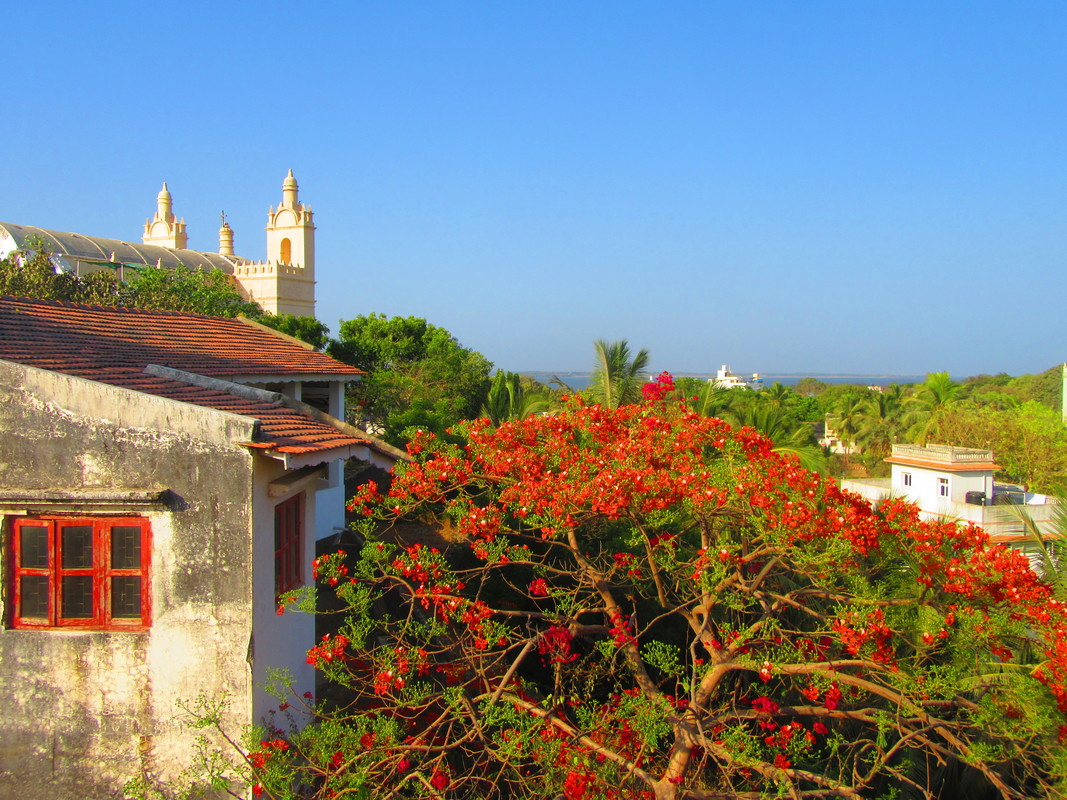