Just beyond Courmayeur and close to the entrance of the Mont Blanc tunnel, Italy meets France. An open, steel arch spreads like the giant’s hand, drawing us to in to explore the Skyway. There are older, longer, higher cable cars in the world but the beauty of this is inspiring. We climb up space-age, steel stairs, clang cross a mesh platform, then step into a globe of strengthened glass, a goldfish bowl for twenty or so people. The conductor arrives, a buzzer sounds and the doors slide shut. Excited, exhilarated, elevated, we start to rise, pulled by silent, heroic cables.
In our enclosure we quietly smile in anticipation of this so-called ‘eighth wonder of the world’. Stomachs lurch and we gasp as the pod tips over the first of the majestic pylons and sing a communal sigh. This is repeated, accompanied by nervous laughter at each tower, until we reach level 1. We transfer cabins and creep ever upwards towards level 2. The goldfish bowl gently rotates, so slowly it seems it’s our imagination, now showing each and every sky traveller a panoramic view of the mountains.
Level 2, Punta Helbronner (surely the name of a Bond villain) is the highest point of the cable car at 3.466 metres. Here is the crystal room, where we view the jewels of the mountains, found by ‘cristalliers’, within the Mont Blanc massif.  We step outside – the sun shines and the wind blows hard. The air is thin and cold in early March and we sway a little. Is it the wind or the altitude that stirs us? Feeling mildly nauseous we stand to collect our senses and breathe deep, transfixed by the view. Holding the handrails for stability we mount the final steel spiral to an observation platform on a cantilevered terrace. It’s like a scene from a sci-fi film and we’re a bunch of unpaid extras. Hats and hoods and gloves and sunglasses challenge us all, especially those taking photographs. Smart phone cameras can hardly cope with the silvery glare. Hand held SLRs with filters and long lenses struggle without a tripod. The results can’t help but be dramatic.
‘Les Dames Anglaises’, three spikey peaks named in French, watch over us from the left, while ‘Dente del Gigante’, the Italian Giant’s Tooth, stands guard to the right. Centre stage is Monte Bianco, or is it Mont Blanc, wearing a papal cap of cloud and smooth white robes of snow? Over the railings of the platform we peer at the roof of Europe and see the Western Alps spread before us, with eternal blue-white glaciers and dark granite peaks peering through the snow as far as the Monte Rosa, the Matterhorn and Gran Paradiso. Below Monte Bianco is the cable down to France, the Vallée Blanche and ‘Mer de Glace’.
We watch a handful of expert skiers set off from the top towards Chamonix. They sweep through the untouched snow leaving ribbon-like tracks, their skilful, turning elegance belying the effort and courage involved. They must have different and fearless brains to be able to ski this vast and unique off-piste area, where mere mortals have trouble standing still. A group of rugged walkers, equipped with ice axes and ropes, is led off by a mountain guide on their own great adventure – a trail of ants working together as they descend.
We look on in awe and smile with tears in our windswept eyes. We get the cable car down, for we have mere mortal brains, but we have touched the sky. 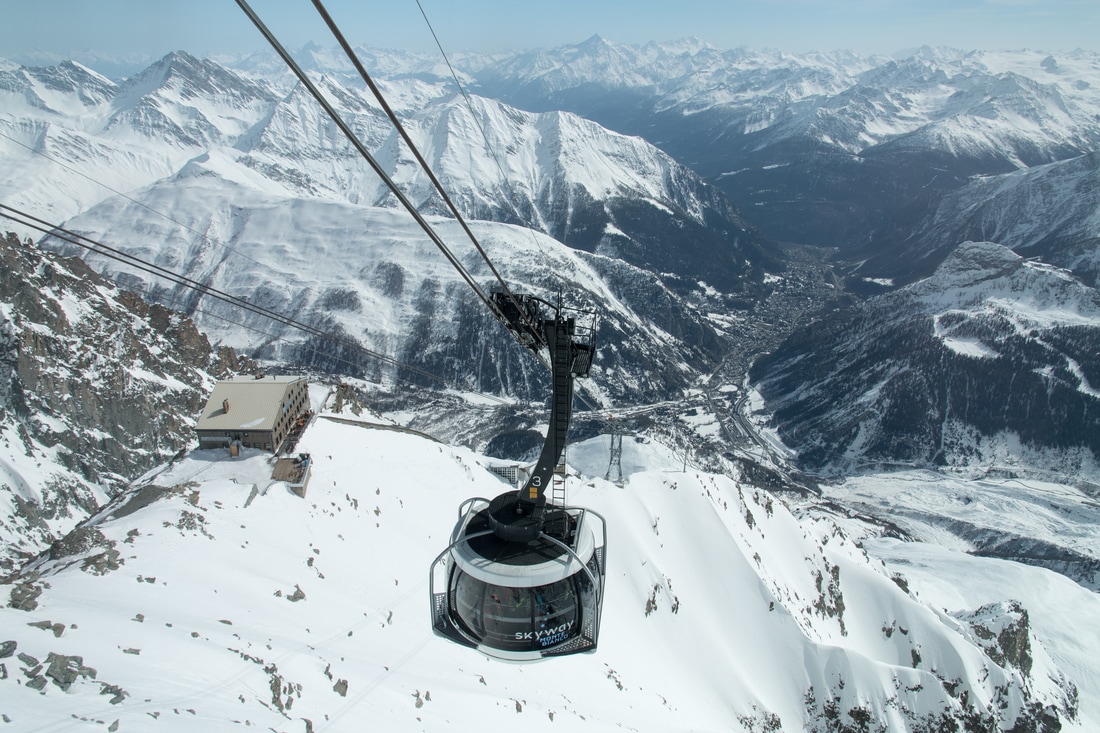 Add your comments about this story on the Blog page.