A friend called me to say the local regional theatre needed a group sales manager. She’d assured the theatre manager that I was interested, and told me my interview was tomorrow afternoon at 12:15, OH, and bring a resume!

What? What was going on?

What was the job description? Was I qualified?

I hated my job.

I decided to go.

Plopped in Buffalo with two small girls (was it only a year and a half ago?), and since then, divorced, I was currently getting screamed at by frustrated copier customers. Instead of answering the required, “NoKnox Service may I help you?”, I panicked, and having to put folks on hold, I’d get nervous and say, “NoKnox, may I hold you?” startling one man into a smushing sob of appreciation, or, “NoKnox, may I service you?” Luckily that call was from a beau who was just checking in, his smartass retort, “Sure, in the middle of Delaware Ave., 12 sharp! Hahahahaha!” Remember, I did say Fellini-esque, right? Gawd.

This was just the next job in a series of dead ends including getting hickies from an octopus and being gifted (hermit) crabs while working at the Aquarium of Niagara Falls; my magical live radio talk show abruptly ending with a pre-programmed buyout; and my eye got glued shut with a false eyelash and I wore brown lipstick when I was the events manager for a new mall, where I fell off my platform shoe and limped for a week. Sigh.

Now, working as a repair team dispatcher, stuck in a back room at a copier company, I had just been reprimanded for not making my 2s correctly for the computer to read. “Just tell me “no loops” in your twos!”, I screamed in my head, while bile inched up my throat. Zip it, girl.

I needed the job.

I hated the job.

My ten-year-old had visited me at work with her babysitter, recently. “What did you think of “NoKnox”, Honey?” “Ummmmm, well, Mom, ummmm, there’s no wood at “NoKnox”. “No wood” was her amazingly perceptive way of saying I didn’t fit there. And I wept at her insight, so apt. No, I did not fit.

Wait! With my recent work history, obviously, I was a SHOE-in for the theatre! Highly skilled at dramatic situations, I “belonged in the theatre!”, right? HA! Perhaps, I should just make a resume with all twos with no loops, so the new boss would KNOW I wasn’t actually loopy, right?

So, I that night I typed up a resume on my old BROTHER typewriter, trying not to have tear stains on it, and no typos—no white-out nor carbon paper, nor copier at home, and Lord help me if I used one at work, for it WAS only a copier manufacturer, you know!

Did I already mention I was nursing a “productive” flu with a wicked high temperature, and the heat and humidity were even more gross, if that can be? I was near tears, again, not an uncommon leakage of my fragility. Uncontrollable snot ran down my lip.  No hankie. Didn’t care. But sure, I AM going! I can DO this! Anything to get out of this dark, wood-free hell-hole of loop-free 2s. Who had the time to sort out where I needed to be? On the good side, I apparently had the “gift” of gab, and could talk my way into a job, then learn the ropes—I’d done it over and over similar to the famous Groundhog Day film. (This is just one story of my guile or guts or survival hand-holds.) Handy skills, but not for the long view, especially in this massive recession. Obviously, the luxury of “prepare and plan” approach wasn’t in the cards for me. College and being an Art Major, taught me nothing about figuring out real-life bottom lines, like earning a living. Nope. But, with a deep breath and my eclectic resume in sweaty hand, I punched out on the time clock for my one-hour lunch break, and hot-footed it to my car.

As I was reaching into my purse for my keys and the parking lot lift-gate card, two kids on bikes whooshed from behind me, either side of me, aiming at two toddling old gals about six feet away, one snatching a lady’s handbag with his backwards handlebars, and they were (never-even-braked-once) gone. Well one was. The other was now hoofing it behind him, all because my instincts foolishly had me to grab his back fender, and now I had his bike! The ladies were reeling with shock. “Are you OKAY?” I asked. Of course they weren’t!

OMG! Those boys? Now, they were coming back, with a haughty strut, as if! “Give me back my bike!” Mr. Bike-less growled at me. Someone inside me straightened my back and firmly replied through my mouth, “You give me her purse and all of its contents, and we’ll talk about the bike!” Was I nuts? I must have totally impressed them with my fortitude and glowing, riveting snotty appearance, because they threw the purse at me, empty, of course, and bolted, the one grabbing the bike from my hand, my other hand still clinging to the (by now) useless resume. I’d already missed my interview.

Just then a young woman, also toddling, seemingly about to give birth, popped out of from a nearby building yelling, “I called the police! They’re on the way!” And then, miraculously, they were right there! Seriously! The police asked us what happened, and, meanwhile, I convinced these old gals to prosecute, because otherwise these punks will just keep doing it to old ladies, learning nothing without consequences, right? (I was a volunteer at Attica Prison after the uprising in ’71, and “…knew a few things, because I’d seen a few things.” *)

Like the keystone cops, we all piled/toddled into the patrol car with sirens woo-wooing, and ripped up a one-way street the wrong way, construction workers pointing the way. Within seconds, we, and another police car, surrounded those fools up against a hospital building, and arrested them on the spot. Don’t mess with two old gals, a pregnant onlooker, and a snotty nosed, germy, miserable job-seeker who’d missed the only job opportunity she would EVER have again! With the perpetrators in tow in the other squad car, we went straight to city hall/police headquarters to book them, the victims now eager witnesses.

About two hours later, we were all police-escorted back to our respective places, all except the boys, who were of age and now in jail awaiting a hearing. Big surprise, my company did not take kindly to my tardiness. No wood. No wood. I’d missed a way out, but did nail a purse-snatcher. Sigh.

Once back in the dungeon, I apologized to the theatre manager with a secret phone call. He said the interviews had been completed, but believing my unlikely story of the purse-snatchers, said he’d see me, tomorrow, at 12:15, anyway. Wait! Where was my resume? Crap. That night, I was so sick, and discouraged doesn’t come close to describing how I felt. Then, the phone rang. It was a man with a foreign accent, “I found your papers for the job! I’m the flower vender from the city hall plaza. You need it?”

Next day, eyes straight ahead, I punched out at 12, got the car and headed for city hall and my probably trashed resume. “Oh, right! I forgot. Sorry. It’s in my van in South Buffalo. Here are my keys…”  Whereupon I simply lost it, sagged in my seat, and began to sob. Thrown, he fiddled around at his cart and handed me a huge bunch of unwrapped gladiolas through my car window, patting my arm and saying, “You tell the man you’re a nice girl and I said to give you the job!”

Double parked, and with gladiolas unprettily strewing my pathway, I stumbled into the theatre foyer. I just stood there, numb. Sweaty, my eyes were glazed with fever, and gooey snot drizzled down my lip, most endearingly. The few flowers left drooped from my resume-less arms.  I was miserable, and unhinged at best.

A man appeared and started toward me.
“You must be Nancy!”
I croaked, “The man said to tell you I’m a nice girl and to give me the job.” Gathering me gently in his arms, he said, “You have it, my dear. Obviously, you belooooong in the theeeee-ater.” Relieved, I smiled and sunk deeper into his arms. I may have fainted. I started two weeks later and learned on the job.
And that was Act One. Curtain closed.
Act Two? Stay tuned.

ENCORE:
Eight years later, he found me to tell me that he instantly fell in love with me in that intimately shared moment. Talk about romantic! 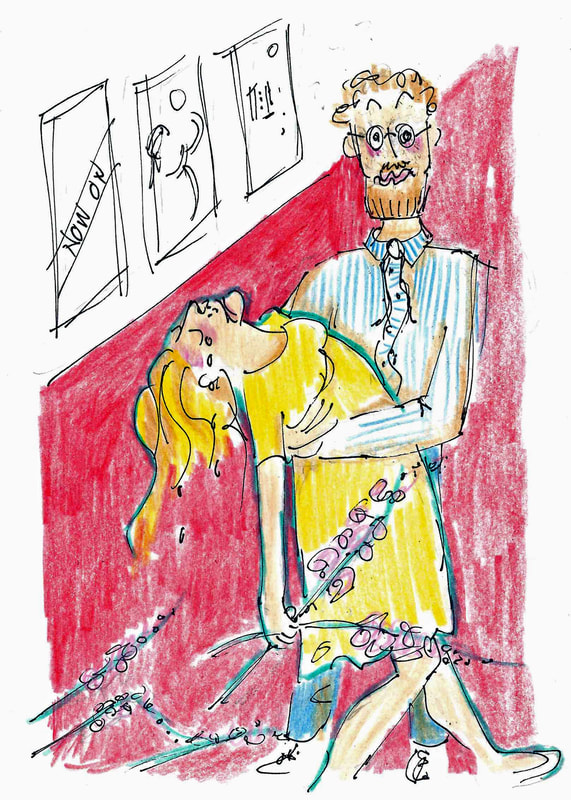 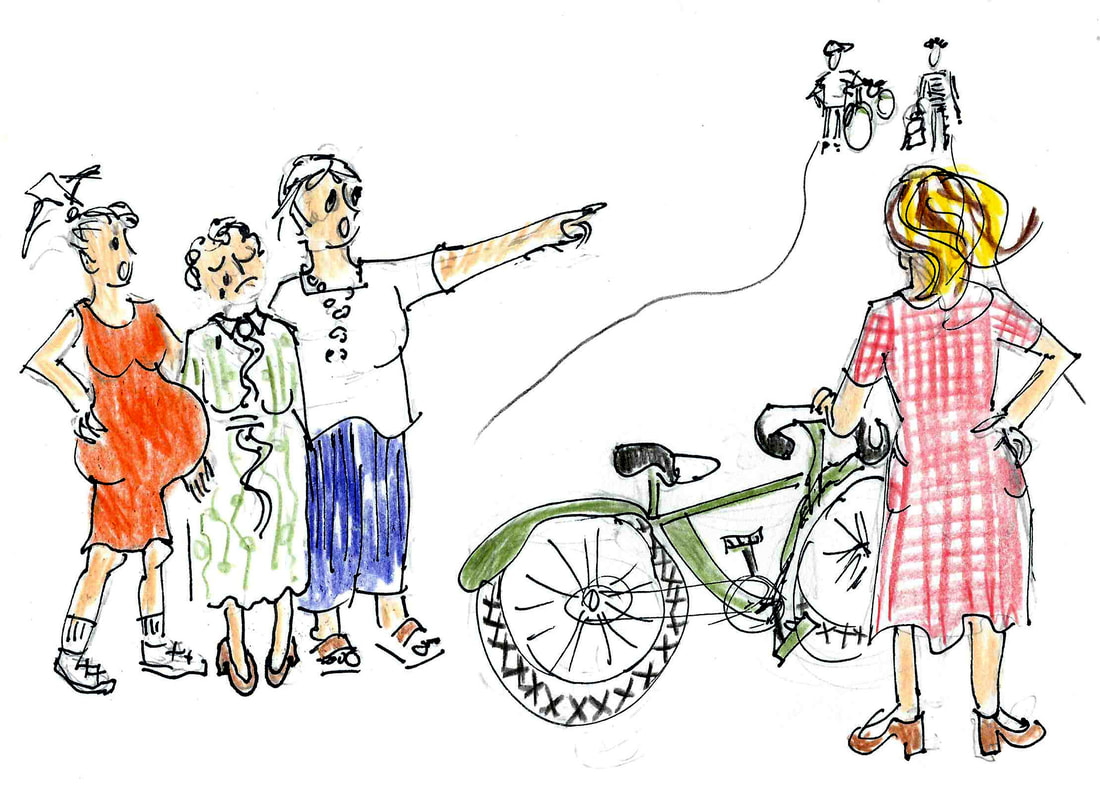