​Bushwalking in Sydney by Stephanie Dagg

Bushwalking is what Australians call walking in natural areas, whether it’s along a trail in an urban park or forest, or way out in the middle of nowhere. It’s the same as what British people would call hiking or rambling, but in quite different scenery.

My daughter, Caitlin, and I went on two bushwalks on the one day during my all-too-short visit to see her in Sydney: the first was at Balls Head Reserve and the second in Lane Cove National Park.

Balls Head Reserve consists of nine hectares of waterfront bushland jutting out into Sydney Harbour. You’re in the city, but until you emerge from the trails at various viewing points, you really wouldn’t know it.

Before the First Fleet arrived and the area was renamed after the Commander of the HMS Supply, the first ship to enter Botany Bay, Balls Head was the home of the Cammeraygal people. Middens (dumps of domestic waste including animal bones and mollusc shells) and rock engravings bear evidence to their time there. The Cammeraygal people were hunter-fisher-gatherers who lived in clans along the North Shore of Sydney. They inhabited the area for nearly 6,000 years, until the 1820s.

There were many intriguing, very non-European trees such as Sydney Red Gums, Red Bloodwoods and Black She-Oaks. We spotted big bulbous growths on some and my research once back home revealed them to be termites’ nest. The species responsible is Nasutitermes walkeri and they build their large, round nests on stressed trees, often ones recovering from a bush fire. Later that day we actually saw some termites hard at work creating a new nest. They were constructing a sort of tunnel that went right up the tree trunk from the ground to the nest site.

As well as the trees, there were huge spreads of Banksias (shrubs with candle like flowers) which are a magnet for lorikeets. We saw plenty of those birds, and also mynahs, and to my delight we got a glimpse of a brush turkey.

We passed some deserted cabins which people lived in during the Great Depression of the first few years of the 1930s. People also lived in the caves on Balls Head during that time too.

Then we came to the Coal Loader. This was a controversial development from the early 1900s. Henry Lawson, one of Australia’s most famous poets, wrote a protest poem ‘The Sacrifice of Balls Head’ in 1916. Here’s the first stanza of it:

They're taking it, the shipping push,
As all the rest must go --
The only spot of cliff and bush
That harbour people know.
The spirit of the past is dead
North Sydney has no soul --
The State is cutting down Ball's Head.
To make a wharf for coal.

Despite the opposition of Lawson and many others, the coal loader was built by 1920 and it continued operating until 1992. Its purpose was to transfer coal from large carriers to smaller coal-fired vessels. There was a high platform for coal stockpiles and underneath were tunnels in which chutes dropped the coal into waiting carts. A cable-hauled railway system kept these carts on a continuous loop between the two tunnels and the wharf, where the coal was loaded into boats. The cable system was replaced in the mid-1970s by a high-speed conveyor belt.

The coal loader site is now a centre for sustainability, promoting innovations for sustainable living. It houses a nice café but we didn’t have time to stop as we needed to get on with our second bushwalk. This was at Lane Cove National Park.

The Park is much larger than Ball’s Head and we were spoilt for choice as to which path to take. We settled on one that disappeared into huge, shady trees and followed the river. It wasn’t long before we had our first encounter with a kookaburra. He was sitting on a branch that overhung our path. He didn’t laugh for us, but later on we heard a few cackles in the distance. It’s quite a menacing sound.

We stopped for a late picnic lunch at a clearing with benches and were delighted to see some more kookaburras quite close by. We put our rolls and water on the picnic table. I was bending down to get some biscuits out of my rucksack when there was a flurry of wings and, next thing I knew, a kookaburra had buried his beak in my peanut butter sandwich. There were notices telling you not to feed the birds but they failed to add that you also had to stop them feeding themselves!

We spent ages watching this fellow, who stayed on the table for quite a while. He even jumped onto the bench next to me and then down by my foot. He was well used to people and had his sandwich pinching down to a fine art.

We reluctantly left our kookaburras and carried on walking. Every now and again there’d be a sudden movement and a scurrying as we disturbed a water dragon who was sunning itself on the path. Once they’d scuttled into the undergrowth it was hard to spot them again.

We saw cockatoos, fairy wrens and more mynahs, and lots of beautiful and bizarre trees and shrubs. Many were still flowering despite it being mid-autumn. The scent of eucalyptus and the exotic yet haunting sounds of birds filled the air. It was truly magical.

Night falls swiftly and early in Australia in April and that brought an end to our truly amazing day. If it hadn’t, I think I’d still be there now. 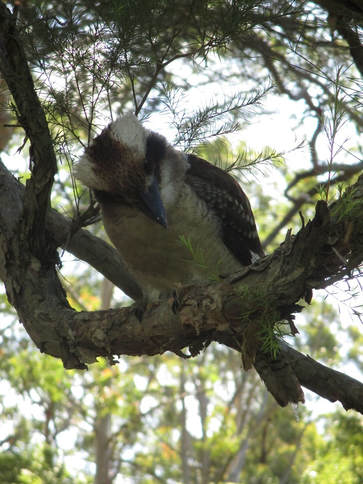