A Cathar-tic Encounter by Yvonne Kilat

The ruins of Chateau de Montsegur, towering 1,207m on a rock formation, looked certainly intimidating. How aptly named as it meant 'safe, secure mountain'. Somehow it also gave me a sense of nostalgia. I've conquered Mount Kinabalu, more than thrice its height. It should be an easy peasy climb, right? But I'm older now.

The shadows were getting longer. Should we go up?  Just then some visitors came down, looking quite unruffled.

"There are no guards at the gate," they said and continued to their waiting cars.

We didn't mind paying tickets but we were pressed for time. We had a ferry to catch and yet another castle to see. Determination won, we went up the dirt trail but the steps were challenging for Malcolm's self-abused knees.

"Better to wear out than to rust out," was his familiar axiom.

On the summit, a wooden platform led the way up to the arched entrance. Tiny wild flowers dotted the ground outside the walls. Except for another man, we were the only ones there. He stood facing a wall but moved when we entered. Had he been praying? Guilty that we had intruded on someone's private moment, we left the inner courtyard and went out through the back door.

Immediately outside the perimeter of the walls were the ruins of the terraced dwellings on the edge of the cliff. The feat of men and women going up and down the mountain with donkeys, bringing building materials and supplies from the village below was beyond remarkable. Did they store rainwater? They may have been safe up here but how cold it was in the winter.

A history enthusiast, Malcolm provided me with all the grizzly and macabre details of what took place there. Montsegur was one of the last Cathar Castles to fall to the Catholic Crusaders. After ten months of siege in 1244, over 200 Cathars voluntarily ended up their lives in flames. A modern stele marked the spot. A rumour was that some escaped to save a valuable treasure, perhaps the Holy Grail itself. Nothing of its whereabouts is known to this day.

We waited but thick, dark cloud spoiled the sunset. The temperature dropped rapidly.

"Let's go down before we lose light," I said.

Back in the campervan, I prepared mee goreng and we ate in contemplative silence.

Malcolm was in Jakarta when he had a precognition. He woke up around 4 am and wrote on a piece of paper, 'Take Yvonne to the Cathar Regions'. I am a Catholic. I never heard of Catharism yet as a native born of tropical Borneo, visiting medieval castles, notwithstanding ruined, was a fantasy coming true. Nonetheless it took four years before Malcolm finally fulfilled his self-appointed mission.

We woke up to the sound of cow bells. The romps of their calves somehow drove away the heaviness in the air. Other campers had gone up to catch the sunrise. Having done it, we decided to continue on our journey. The road took us downhill where lush forest reminds me of home. Bald patches of farmlands adorned the slopes of the hills.

Chateau de Puivert was an accidental sighting. Puig-Vert means 'sited on a green hill top'. Most other castles in the area were built on rocky mountains. We paid five euros for each ticket and entered through a square gate tower. The bridge over the ditch would have been a drawbridge although the moat was gone. Only five of the original eight towers remained.

The keep was the best preserved part of the castle. Grand old furniture were stored in the lower grounds. The chapel was on the third floor, decorated with columns, mouldings and shields. The Minstrels Room on the fourth floor had a rib-vaulted ceiling with sculptured figures playing medieval musical instruments. It was a squeeze going up the narrow spiralling staircase to the fifth and top floor. The defensive platform provided a magnificent view of the Quercob region; the village and its lake, patches of newly ploughed farmlands and bales of hay drying in the sun, and a glider taking off from the green.

Hours later, we arrived in time to park on the last good slot for campers. A putrid smell from a flowering bush greeted us. Chateau de Peyrepertuse loomed in the distance. A winding road disappeared from view in the twilight. Perched on top of an 800m limestone cliff, a guidebook said that the main part resembled the prow of a ship but I couldn't distinguish between the rock and the castle.

We spent the next four hours exploring the ruins. Other groups came and went in a jiffy. Large roughly cut stone path led to the first castle. The two castles were linked together by a vertigo-enducing staircase cut into the living rock.

Malcolm showed me the latrine hole which he too made use of. We watched a falcon show by performers in medieval garb from the tower of the second castle. In August they held an annual Medieval Festival there.

"When I've reached a high point, I want to remain there," Malcolm stated, begrudging the fact that we had to leave.

We didn't have time to visit Chateau de Queribus, the highest of all the Cathar Castles and superbly photogenic. The castles were deliberately built within sight of each other to exchange life-saving signals. I wished we could have stayed on but Malcolm was probably Cather-ed out, by then.

The reason behind the Jakarta moment remained a mystery but I was glad we came. For Malcolm at least, it was 'Mission Accomplished!' 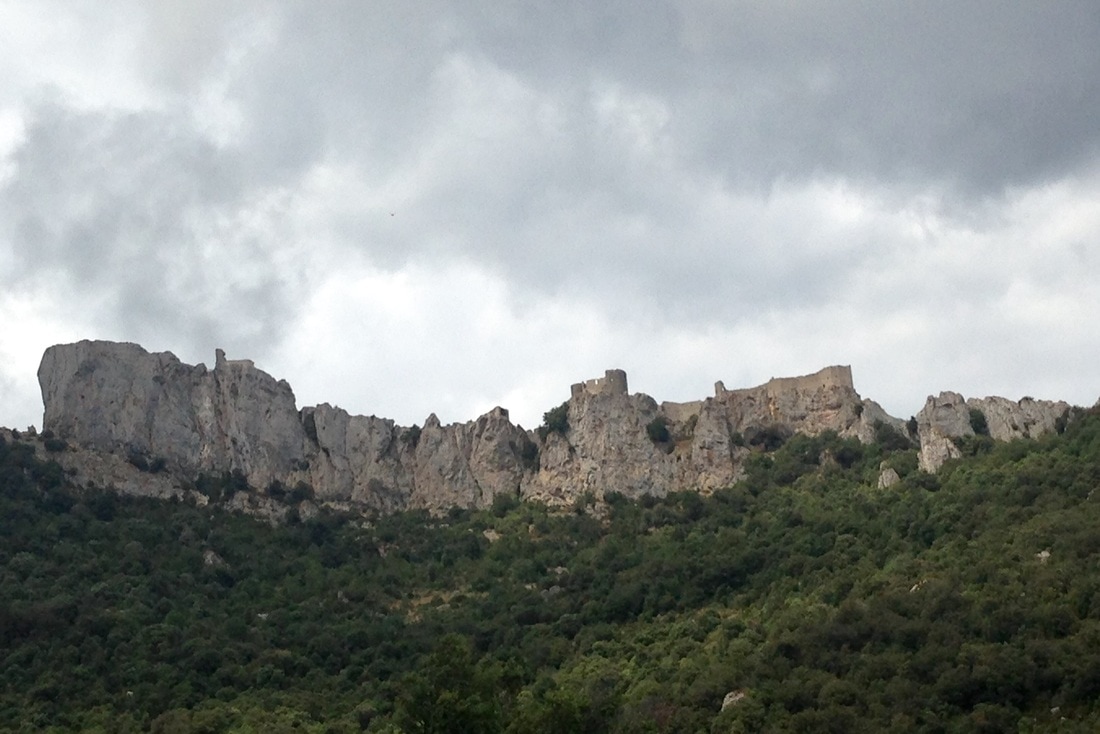