​A World Upside Down by Helen Bing

Isn’t it amazing just how quickly our life can change?  At the beginning of the year we were all going about our lives aware that in a city in China a new virus had raised its head.  At that stage though, I don’t think any of us realised just how this was going to impact upon our lives.  Now we have learnt new words like Covid and found out the true meaning of pandemics.  Everybody has learnt about Lockdowns and probably got to know their families a bit better because of it.  I live in Auckland, New Zealand, and we are currently in lockdown thanks to Covid-19.  From where I am sitting in my dining room I can look out over a wide, ever changing area of trees and vast skies.

As our world has suddenly become relatively people free, the garden has ﬁlled with birds.  Flocks of sparrows have been playing in the bare branches of a Red Robin tree, fat blackbirds  use the Monkey Apple  trees out the back as their own personal gymnasium, and yesterday a Rosella was swinging oﬀ the leaves of a tree gathering whatever it is Rosella’s gather.  A pair of Myna birds playing on the neighbour’s roof made me laugh the other day.  It was the Myna’s mimicking abilities that made me look.  It sounded just like my old cockatiel.

My favourite has been a young Tui, often called the parson bird overseas.  On sunny days his feathers positively gleam various shades of blacks, blues and greens. His white downy feathers at his throat ﬁnish the picture.  He plays just outside out dining room window in the now bare plum tree calling out to his mates.  He then takes oﬀ at top speed across the backyard, around the corner of the house and up the road.  How he has managed to miss the house is anybodies guess.

As I sit here looking out around me, I think about how lucky we are to live in such a lovely part of the world and what we have on our doorstep.  Before the world turned upside down, I was blessed to be able to go into the Milford Sounds, by ship, down in the far south not once but twice in a matter of weeks.  On the ﬁrst trip to the Sounds it was uncertain that we would be able to enter, as the Tasman Sea was really showing us what it was capable of.  The cruises before us had not been able to get anywhere near the Sounds as it was just too dangerous.  We were just so lucky that the weather had settled down.

On a somewhat grey, overcast day in December we made our way into the Milford Sounds.  The sea that had been imitating a wash machine suddenly became calm as the high, steep sides of the opening to the ﬁord gave us shelter.  We ﬂoated up between the steep bush clad mountains with their deep, carved out gullies made by the waterfalls that tumble down the rock face.  Wisps of cloud hung down low across the mountainside.  Mitre Peak peeped coyly out from behind the mountains in front, still covered with a layer of snow.  The Bridal Veil Falls cascaded down into the deep, still waters below.  A ﬁne mist lifted oﬀ the water where they landed.

I stayed out on our balcony (the ﬁrst time we have ever had one) and watched the morning unfold, well wrapped up against the early morning chill.  From here I could really appreciate the peace and quiet of the area. The colours this day were muted by the overcast sky but that did nothing to distract from the sheer magnitude of our surroundings.  From deep in the bush birds called to each other, keeping well hidden in the dense foliage.  The ship slowly turned allowing us all to enjoy the wonders this place oﬀers.

Unfortunately we had to leave.  Slowly we made our way back down the ﬁord. Timetables had to be kept and all of that, but never mind, I knew that I would return in a few weeks’ time.

In January 2020, still blissfully unaware of what the next month or two had install for us, I was back in this beautiful part of the world.  Yet again, the weather was dictating whether or not we would get in.  The day before we had been buﬀeted by huge seas as we came down the New Zealand’s west coast.  Fortunately, the winds dropped - as the Captain said it would - and, at 6 o’clock in the morning, we entered the Sounds.  I had packed what I thought was a warm enough jacket.  It is times like this that you realise those of us from the north know nothing about how to keep warm. No balcony this time, my husband Tony and I just had a small window in our cabin, so he sat at the window and I went out on to the open decks.  Although it was well and truly summertime, it was freezing at that hour by our standards, but we managed.  Robyn and I could still nip inside to defrost when we needed to.

The contrast between the two visits was very apparent.  This time a wonderfully clear day greeted us.  The sun was coming up behind the Southern Alps lighting up a soft, clear blue sky with a touch of pink colouring the clouds.  The foreground was still in deep shadow.

Slowly we made our way further into the Sounds.  The waterfalls were there and some patches of snow were tucked in the crevices on the tops of the mountains.  As the sun got higher in the sky, the stark rocky walls stood out through the bush.  Up on Mitre Peak, snow still clung to the summit.  This time the snow was slightly tinged with yellow, a legacy of the Australian ﬁres.

A little later, the sky was now a clear blue dome overhead sprinkled with soft, ﬂuﬀy white clouds.  The mountains reached up out of the still waters.  A small plane came from behind the mountains with sightseers, like ourselves.  Surprise, surprise, another ship appeared.  By this time we were making our was back down through the ﬁord.  The black shape got closer, and there was the Queen Elizabeth taking her passengers to see the Sounds in all their glory.  As it happened, when we got home we ended up making a booking on the Queen Elizabeth around Australia in March, but Covid-19 put an end to those ideas.

At the moment we may not be able to get to our most beautiful scenic spots, but I can still enjoy the photos and the memories.  Our tourist trade has dropped away to nothing currently, but things will change.  All I can say is how lucky are we to live in such a wonderfully diverse country as ours which will always be there waiting for us all once we are ready. 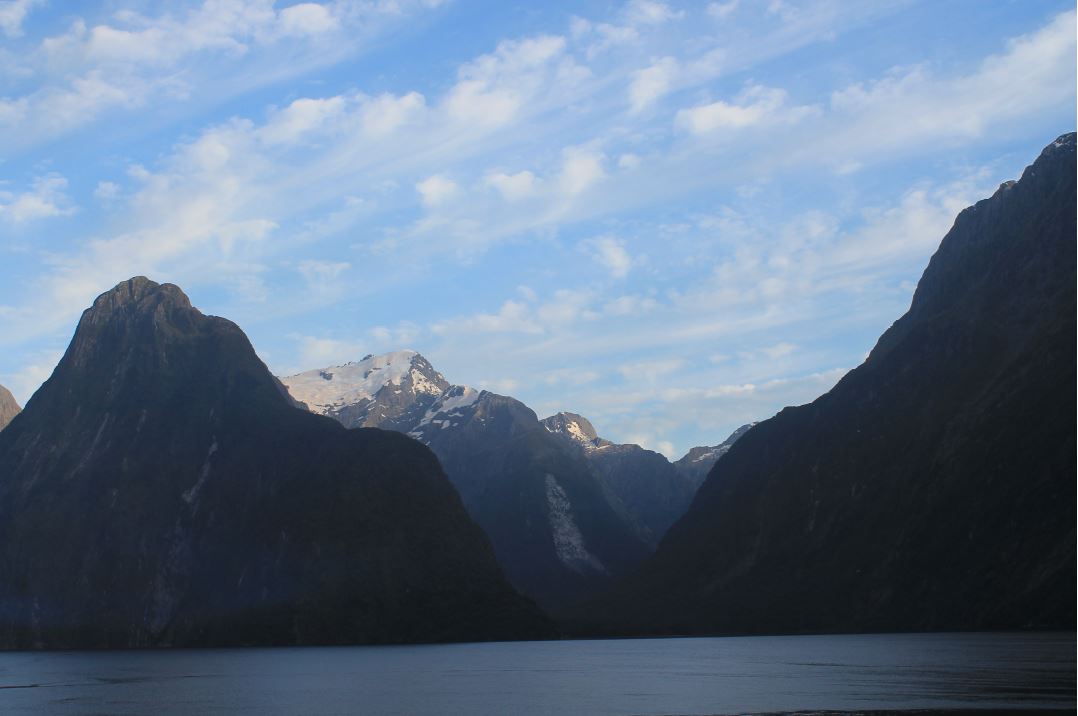