​Rafting in Bosnia and Herzegovina by Olivia-Petra Coman

I always say that when I fall in love with a place, it is forever, because it feels real and unshatterable unlike relationships with people. Add to this a fascination for that land’s waters and a new sport you enjoy to your core, and – there you have it – the perfect excuse for your return, again and again.
Love for water is one I’ve had forever, love for adventure is something that has grown in me over the years. I’ve always thought of trying rafting out, yet I haven’t dreamt it would get into my system this deep.
It all started in 2009, while I was touring the Balkans for 3 weeks with 4 of my friends. One afternoon in Bosnia, one greenish river, some amazing waterfalls and the overall backdrop and vibe… and I was hooked! 2010 followed, with a different section of the same amazing river, called ‘Una’, and with an international sports festival held on this river – ‘Una Regata’ –, in which I took part with my friends. It is easily understood that 2011 would find me back on Una, paddling, experiencing the thrills, and rejoicing its nature.
2012 got away without any travels to Bosnia, without meeting my dear friends there, or seeing the turquoise tickle of its waters, so I decided not to spend 2013 in the same manner. Only this time, I wanted more. More days on water, more rivers, more thrills. As in all solid relationships, there may come a time to test them. So, this was my test with Una, the river I viewed as the most beautiful in the world. I honestly felt a bit nervous that the charts would change, especially as all Bosnian rivers are enchanting.
First on was Vrbas. I had watched it on several videos on youtube, but getting up close and personal with it was different. Not as green as Una, though a bit more aggressive on certain sections. No waterfalls, but many tricky rapids, with one of its sections considered the best sprint section in the world. The 2013 ICF Wildwater Canoeing World Cup Final let us enjoy the rapids from afar. They didn’t seem easy and I was wondering if riding them was going to be as challenging as it seemed. With the hard section of the river checked, the Karanovac – Bijeli Buk route was the perfect occasion for us to start feeling as a team, paddling as one, practising traverses, and improving our skills.
Second on was Una. Was going down Una without our friend who’d usually act as our skipper be the same? It had been raining and Una was greener, its water level higher, and the waterfalls richer. The backdrop, vibe, and feel hadn’t changed a bit. The 6-metre waterfall at the start of Štrbački Buk – Lohovo route was a 4-metre one now and I’ve barely had the time to savour it or the smaller ones that followed. It was intense and familiar, yet different. And despite focusing on the rapids and waterfalls, I had some moments all to myself – watching the wild duck, the blue sky reflected into the water, the underwater vegetation, and the purity of it all.
Third on was Tara. I had heard so much about its canyon and about its surreal colour and beauty. One thing I wasn’t aware of was how wild it actually was. I truly believed I’d go on a slow ride on the river, having time to look around, admire the cliffs, feel the energies. I was wrong. It was one of the most intense rafting experiences ever. The water level was huge and it reminded me of Jökulsá Austari – the Beast of the East – in Iceland. I never rode such high waves, I was never so wet and cold during rafting (7-degree water), yet it was incredibly challenging and amazing. A small break gave me the chance to study the water. Really pure and light turquoise, but with a rougher vibe, not as peaceful as Una’s.
Fourth on was Drina. Lazier, with a lower water volume than Tara and darker in colour. But still fascinating and incredibly welcoming for our paddles: no big waves or difficult rapids. Drina guided us to the shore and was the last Bosnian River to test our courage and skills that year.
I’m sure my adventures do not end here. Something’s calling me back. And there’s definitely one thing I found out when comparing these four amazing rivers: first love never dies. And my first river-love was Una. 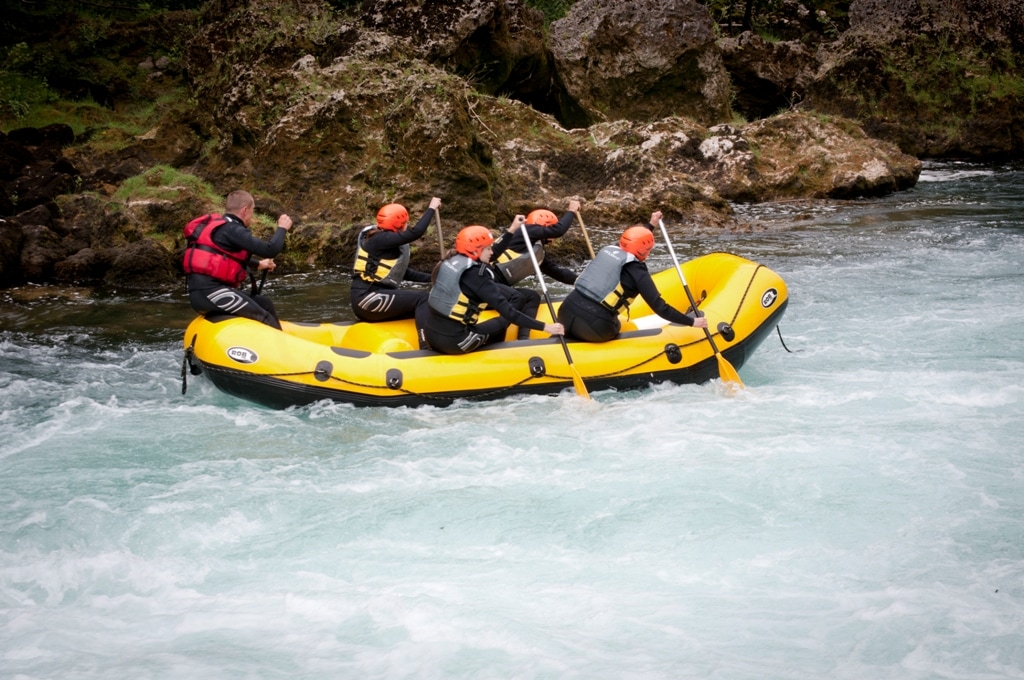