​In Clearing by Liliana Amador-Marty

Trapped in delusions, my mother's world is turned upside down, confused. Disoriented she is fearful. Her Dementia has skewed reality. No longer in control of her faculties, she obsesses over forks, spoons and knives, hiding them in odd places: inside tightly wrapped plastic bags behind cabinets, underneath dresser drawers inside of towels, up against the wall under her bed, in the hamper, even loose inside the dryer. Paranoid, believing her cutlery is being stolen, she accuses her dearest relatives of taking them. In reality, she has forgotten their designated hiding spot. Earlier in my mother's state of mind, she withdrew eight-hundred dollars from her bank account. For safe keeping, she put the money in her secret place. When she forgot where her secret place was, she accused my sister of robbing her. The blaming hurt deeply. At the time, the illness was beginning to show. We did not see it coming.
Now my mother can no longer live in her house alone. She lives in a nursing facility. Left to her own devises, she has fallen down the stairs, suffered heart trauma, survived triple by-pass surgery and two wound infections, a fall from the hospital bed and a second attempt at stitching the gaping hole in the centre of her chest. To say she has physically suffered would be an understatement. Yet she remains stoic but vacant, forsaken, yet with a desire to live, hanging on because she wants to go home. The fact is that her home is already sold. She is never going home. I wonder if she even remembers she once owned a house. In the kitchen, once her domain, the calendar on the wall open to December 2020, the last time she was there. Taken to the hospital in an ambulance after her fall, she parted abruptly with her belongings.
She has not forgotten about her things. Half a century of her life was spent in this house. Fifty years of possessions that I was tasked with deciding what is valuable enough to keep, what is broken enough to discard, memorabilia that does not belong to me. The removal of personal objects are the responsibility of each individual. No-one else has the right to touch others' things let alone trash them. It is a bittersweet process of exhaustive physical labour, a challenging emotional exercise riddled with guilt. The sole reason I left London and my family for three weeks was to clear out her personal effects, stage the furniture and sell the house. Standing in the middle of the interior porch starting from one corner of the room, turning around myself, I scanned for objects, clothes and fixtures to throw out or donate, the first phase of selling a house: The Clearing.
In purging, I discovered things I never knew we had, recovered lost treasure I thought we would never see again. Behind a display case filled with our trophies, diplomas and tassels from graduation hats, lay an unopened box with a limited edition Barbie doll that looked just like my sister in her tight late-eighty's era jeans. I surprised her with her long lost figurine that inspired her love of fashion design. Inside the case a trophy of sorts; the bullet that seared past my father's left inner thigh leaving a burn mark. A few inches upward and my sister and I would have never been born. And the biggest treasure which made the cutlery paranoia make some sort of sense; the heavy chest she brought with her from Colombia, silverware and serving spoons, a wedding gift tarnished with age and no doubt truly valuable. I had never seen this heirloom.
I recovered the lost money she hid four years ago stashed under her dresser drawer on the floor wrapped inside a pay stub in a napkin rolled up then disguised as a crumbled up wash cloth. I almost threw it away but felt the wad of bills inside and became curious, undoing each layer, grimacing, unsure of what I would find. From then on, I searched every piece of rolled up napkin inside pockets and wallets which never held any cash. In the Bible, like a gift from the Universe or the Heavens, I recovered the remainder of the eight-hundred dollars she misplaced.
Thank God, I thought… I just found the last mortgage payment on the house…
Back into her bank account it went.

I could have cracked with every photograph I came across, fallen apart with every object I held in my hands like the broken things I threw out. I found the clothes my father wore on his last day alive. My mother kept them sealed in a plastic bag; his white shirt, black slacks, belt, socks and loafers, even his white handkerchief and the heather-grey hoody he became accustomed to wearing. She hid them from her degenerative sight, a way of healing from his loss three years before. Holding his garments against my chest, gripped me as if he had entered my teenage room and wrapped his arms around mine. I sensed him. Letting the emotion come and go, passing through me like clouds, I pressed onward. I had a job to complete. Following my instincts, I decided to keep his clothes.
Grateful to have spent weeks alone in the house in which I was raised, reliving memories of my first loves and my lost ones, people who mattered in my younger years some of which remain with me, most of which I never saw again and still a few I have lost. As I stared at the old photos, the exact captured moment flashing before me in vivid detail reliving the sensations, recalling the words exchanged in the instant the photograph was taken, I missed them. I suppose photos serve as proof moments in our lives existed when we can no longer remember them. I had the opportunity to bid  farewell to our house room by room, unlike my mother, creating closure to that chapter of my life and hers.
I have cleaned out the interior porch, living room, dining room, kitchen, bathroom and all three bedrooms. In removing things, more space emerged. I saw the rooms for the first time, spaces I had dreamed of re-arranging for years. Nothing in our house was allowed to be moved. And now, my chance to stage the furniture in every room the way I imagined.  I turned the interior porch into a study with a desk I found under piles of clothes, a standing lamp and a bookcase for the Encyclopedia Britanica, our first search engine. I dusted her crystal and displayed the wine flasks, glasses and bowls in mirrored cases that to my surprise had lighting but had never been lit. The collection of cutlery that I found all over the house went back into its proper place, the kitchen drawer. The bedrooms crisp and neat with new white linens, the bathroom dressed in bright white towels and neutral floor mats were renewed just like me.
The place was changed with all personal items removed and the personal furniture re-arranged into a semi-blank slate. I had made it mine, reclaimed it, rearranging my own negative past feelings of confinement into new positive feelings of liberation. I felt I could live there and was disappointed in having to relinquish it. So standing back and looking forward, I photographed my accomplishment room by room; the finished Staging Phase. The house sold in three days. The second mortgage will finally be paid, no longer her debt. My dilemma is that she does not know her burden has been lifted and worse, she may never understand the freedom.
My next task is even more challenging; emptying the house of my mother's oversized Prides and Joys, the furnishings that scream out, I have arrived! I must now decide whether to sell or store her retro lighting pieces we call spider lamps, the big dining table with its plastic covered, beige chairs, in mint condition thanks to their protective layer, and the massive television once costing thousands of dollars now only worth a few hundred. I will store her crystal, the heirloom of silverware, our family's original documents from the old country and every single photo ever taken in Colombia and in America.
Certain objects can never be replaced. They tell our stories, our history.  Those that no longer hold significance can be released. They served their purpose like the green house on 31st Street that payed for my dance costumes, my traditional Sweet 16, a small portion of my college education and pieces of my wedding. An old but solidly dignified house, kept in the best condition my parents could afford, new to another immigrant family moving in their belongings at the beginning of their journey in Paterson, imprinting their narrative on its blank walls. 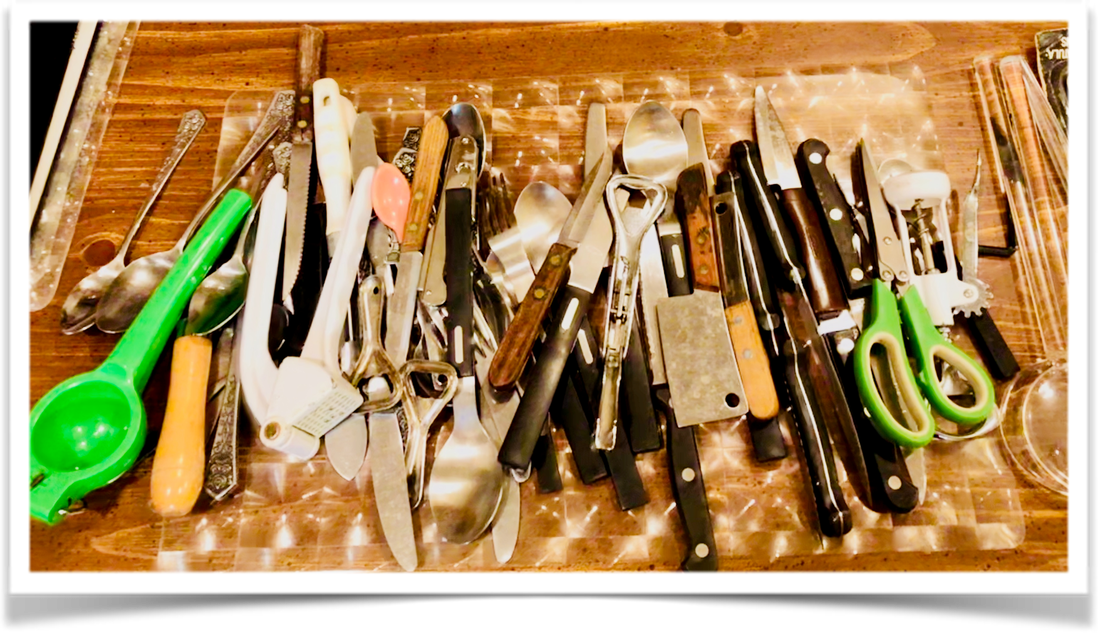 The cutlery found around the house.
​