Upon landing at the New Delhi Airport, I asked for directions to purchase tickets for a tourist bus to Agra. The bus company employee told me one was leaving within an hour and recommended we get something to eat and drink to take on board since the trip would take four hours and only stop once along the way.

A fellow American passenger, waiting to board the bus, slurped on a mango shake and commented to his travel partner that it was delicious.

My husband Charles asked him where he got it. The man pointed to a sidewalk stall across the street. “Only 15 cents!” he said.

I stood in line while Charles crossed the busy road to get shakes and sandwiches for the long journey.

I asked the man and his companion if they were enjoying India.

“Seems like India is all about hard life and early death,” he said.

“It is overwhelming,” I said. “Have you been in New Delhi long?”

“A few days now,” he answered. “Less poverty than in Calcutta.”

I wondered how it could even be possible, when I could see beggars and hawkers pressing and pestering tourists in every direction I looked.

Charles returned with food and drinks and we climbed aboard the air conditioned bus and found our seats.

“Too bad the AC doesn’t mute the sounds of blaring horns and screeching brakes,” I told Charles as the bus crawled past office buildings, shops, street vendors, and factories belching black smoke. The traffic was a scramble of moving vehicles and people making their way through the frenzy on the streets below.

Little by little, we moved forward, and an hour later cleared the city and traveled south on a road through the rural countryside. I unwrapped my sandwich and happily munched while watching the rural scenery unfold. I spied water buffalo, cattle, and goat herds grazing on sprawling farms. Men plowing fields behind oxen. Mud huts dotted the horizon.

We passed through a village where women carried jugs on their heads and gathered around a community well to collect drinking water.

“Bet these wells have served this community for centuries,” I said.

“The road also,” Charles added, as our bus swerved to miss a bullock cart heading straight toward us on a one way lane; going the wrong way.

“According to the guidebook, this road is the original and has been used by peasants, noblemen, pilgrims, and merchants traveling in caravans. Even kings have traveled this road.”

We passed canals all along the road. Young boys were bathing alongside water buffalo.

“Look, elephants,” I said, pointing to a field nearby.

I continued reading the guidebook, and shared highlights about Agra. “Agra’s golden age began with the Mughal Empire, under the Emperors Akbar, Jah … an-gir,” I said, butchering the emperor’s name. “… and Shah Jahan.” I laughed at myself.

“In what year?” Charles asked.

“A long, long, time ago,” I said, searching for a date. “Sultan Sik-an-dar Lodī, ruler of the Lodi dynasty founded Agra in the year 1504.”

Charles appeared to be snoozing.

I smiled, remembering the postcard my great-aunt Gladys had sent me from Agra of the Taj Mahal. I was a young girl then, with big dreams of traveling the world. She also sent a photo of herself standing in front of the magnificent monument. I had always dreamed of standing in the exact same spot.

The bus arrived in Agra and drove through gates to the main entrance of “The Gateway” hotel, a few kilometers from the glittering Taj Mahal monument. Several acres of manicured gardens welcomed us, and the marble floors glistened as we entered the lobby and checked in. We were welcomed and our foreheads were anointed with a dabs of sandalwood tikka paste.

“Sandalwood blesses and energizes.” She bowed.

“Fifth floor,” the hotel clerk said, handing Charles the room key. We took the elevator. Charles opened the door and we entered a spacious and elegant room.

Charles agreed, and adjusted the temperature to cool the warm room.

Moments later, our windows were steamed and the Taj Mahal view disappeared.

“Oh no!" I laughed, wiping the moist film away with my hand. Staring through the window at the majestic mausoleum was a dream come true. So I kept clearing the condensation.

Unfortunately the hotel was noisy, day and night, because of city sounds from the streets below. But it was authentic India, with sitar music in the lobby, and excellent Indian food in the restaurant.

And smudges of sandalwood paste soothed my soul before heading to bed. Tomorrow, I thought, drifting off to sleep, I will stand where Aunt Gladys stood when she visited the Taj Mahal many years ago. 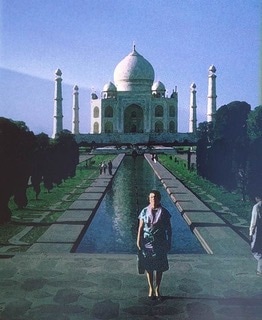 Excerpt from Good Morning Diego Garcia: A Journey of Discovery

To learn more about me and my life abroad please visit my author site: http://susanjoycejourneys.com/

​
Add your comments about this story on the Blog page.