​A TETE A TETE WITH A TORTOISE by Malcom Welshman

I am wary when the world’s oldest living land animal trundles up to where I am sitting and attempts to lever himself over my outstretched legs. Having no desire to have my kneecaps crushed by 300 kg of giant tortoise, I whisper a friendly, ‘Hello Jonathan.’ and proceed to tickle his neck. That does the trick. He comes to a halt, levers himself up on his front legs, neck outstretched, head held high. Bliss.

‘Well, matey, I wonder how many times you’ve enjoyed having this done to you,’ I say, as Jonathan turns his head and gives me a rheumy-eyed stare. After all, this tortoise is 186 years old.

My meeting has come about as a result of a speaking engagement I had on board a cruise ship where one of the ports of call was going to be St Helena a tiny island in the middle of the South Atlantic, 1,200 miles from the African mainland and one of the remotest places on earth. My curiosity had been immediately aroused since I had read about its most famous resident, Jonathan, the Seychelles giant tortoise. A national symbol. Appearing on the island’s postage stamps and on the local five pence coin.

How could I miss the opportunity of having a tete a tete with him? I arranged this through Debbie, the manager at Plantation House, the Governor’s residence where Jonathan also resides in a paddock within the manicured grounds at the front of the house.

As I stepped off the ship’s tender onto the tiny wharf of Jamestown the island’s capital, I could imagine Jonathan as a mere 50 year old, being hoisted ashore at the same spot back in 1882.

It was all to do with a tortoise called Frederica brought to the island in 1991 as a mate for Jonathan. Since then, he’s duly carried out his duties on a regular basis. Last October, Frederica had to be treated for a chipped shell when it was discovered she was a he. Oh dear. International headlines. ‘Jonathan’s Gay!’ And Frederica was hastily renamed Freddie.

Debbie tells me that Jonathan is on a weekly food supplement consisting of fruit and vegetables from the Plantation House garden to which are added apples and pears. These latter two have to be imported. Seems he gets more fresh fruit and veg than most of the islanders.

I lean across and rub my nose against his beak. All very friendly. No objections. Head out, he continues to listen to me blathering on. Seems his hearing is still excellent. I swivel to one side when Jonathan, having decided he’s been tickled enough, lumbers forward seeking the sanctuary of some shade.

Interview over. I smile and pat his shell as he passes.

‘You’re a true gentleman,’ I murmur. ‘Long may you reign.’ 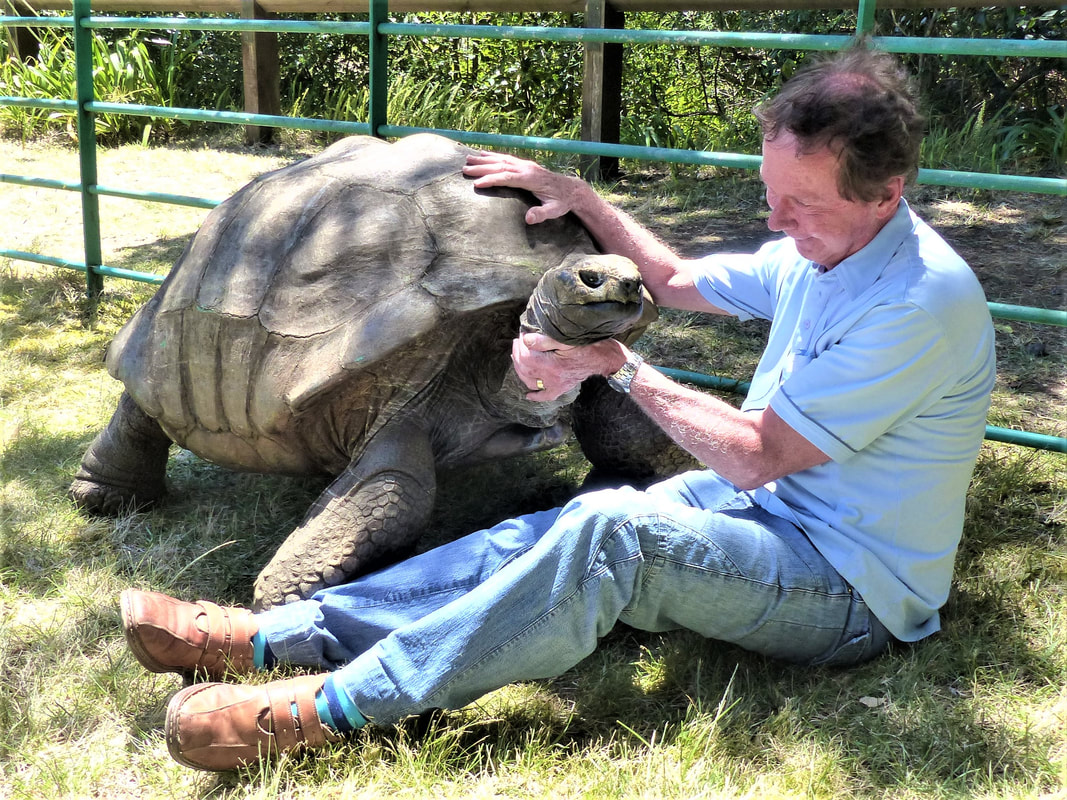