To tell the story of dog days in Uruguay, we must first go back to Canada, to Revelstoke, British Columbia, where I was an innkeeper.  When I opened my inn in May 1995, I had two old dogs.  I lost the first one before Christmas and the second two years later.  I missed my dogs and I missed the daily walks.  However, life as an innkeeper was certainly easier without dogs.

Three years later, at a Chamber of Commerce social function, I spoke with two women who remarked that my dogs must have passed as they no longer saw me on dog walks.   I confirmed their thoughts and added that it was easier to do my work without dogs.  They countered with, “so you wouldn´t own another dog”, and I conceded that perhaps I would, if a small, house-broken dog was in desperate need.

Apparently, one of the local veterinarians was standing behind me.

A few days after the event I got Simon.  He was a shiatzu/terrier cross, nearly two, abused, and unwanted.  He was not delivered by the vet office, but by a surly girl in an old truck.  I opened the passenger door and Simon, who actually did not have any name at that time, snarled to let me know he would bite me if I tried to touch him.  The girl offered to drag him into my inn if I would accept him.   I accepted the dog, declined her assistance, and asked her to pass me his leash.  We made an uneasy passage to the inn.  We also had a lengthy adjustment time, but Simon became a great inn dog.

However, this is not a story of the inn, or even how I met my wife, Gundy, also an accommodation provider in Revelstoke, or why and how we ended up in Uruguay in 2007.  This is a story of our dogs in Uruguay and Simon was the first. 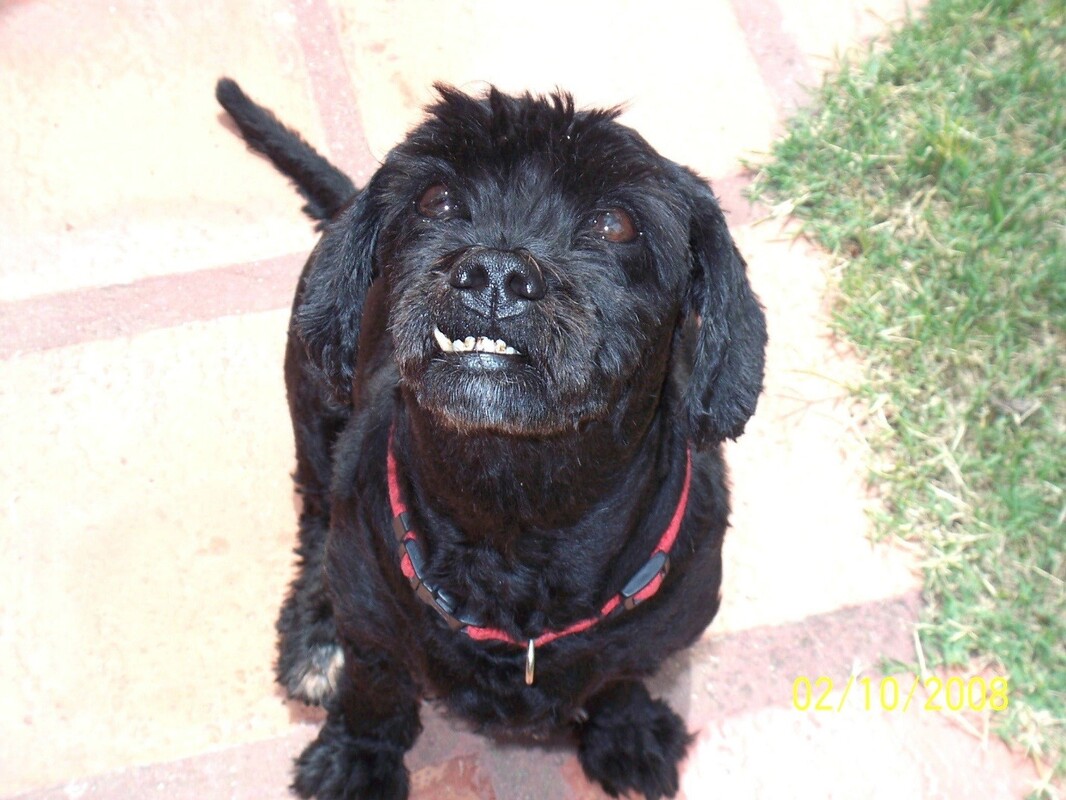 Simon​
AND IN THE BEGINNING

Gundy arrived in Uruguay a full seven months ahead of me.  Her business had sold easily.  Mine was difficult.  At the beginning of October, I put Simon into a carrier cage at the airport in Vancouver.  It would be an incredibly stressful, twenty-five-hour journey before we would finally get to Montevideo.

After I boarded the flight, I was pleasantly surprised when an air hostess stopped by my seat to assure me Simon had been loaded on the plane for our first leg to Chicago.   We were scheduled for a brief stop-over before continuing to Washington where Simon and I would change planes for South America.

However, we did not leave Chicago as scheduled, sitting for a long time on the runway.  No explanation was given.  As the time passed, our transfer window shortened.  By the time we flew, it was obvious that we would only make the flight to Buenos Aires with some luck and assistance.  I called an air hostess, explained my situation, and, as I was seated at the very back of a full plane, asked if there was some way I could deplane before everyone else.  She said yes, they would make an announcement.

No announcement ever came.  I was one of the last to get off and had no idea what was happening with Simon.  I ran to the departure gate for the next flight, but when I arrived, the area was empty.  One of the last staff persons left said the plane was loaded and ready to pull out and I was too late.  I frantically explained I was travelling with a dog and had no knowledge where the dog was due to the late arrival from Chicago.  She called the plane and learned Simon had indeed been transferred to the plane.  With this information, the gate was re-opened, and I was allowed to board.  I had no idea if my six suitcases had also been successfully transferred, but at least I knew that Simon and I would get to Buenos Aires together.

Things did not get easier in Argentina.  Although I learned in-flight my bags had been loaded, I also learned that we would be required to “enter” Argentina to have Simon inspected before we would be allowed to make the short flight to Montevideo.  This required passing through customs with six huge suitcases and a dog carrier cage, with stern instructions that the dog must not be allowed from his cage, racing (as best one can do when moving a mountain) to the other end of the airport, standing in line to check-in for the flight to Uruguay, and then having an Argentinian veterinarian inspect Simon.

Well, there never was an inspection. After most passengers had been checked in, a vet finally did show up, but she did not look at Simon or the papers attached to his cage.  However, she did collect the US$250 inspection fee and leave me with insufficient time to make the Uruguay flight.  An understanding airline employee, took care of us, helping us to get around security through an airline personnel gate, and we made our flight.

Of course, I expected more problems as I approached Uruguayan customs control with the six large suitcases and a dog in cage.  The customs officer asked how long I was staying in Uruguay.  I answered, forever.  He said welcome to Uruguay.  Nothing was opened or inspected, not even Simon´s papers.

Simon heard Gundy´s voice as soon as we came out the doors, and he started barking.  We headed straight out the front door and opened the cage.  Simon had a very long pee before going crazy with both of us.

I was nearly 61 and Simon was 9.  Gundy had worked hard to prepare our home, Casa Inspiración, for our arrival, but it would take some time for Simon and me to settle in.  Neither of us had ever lived in a different country. 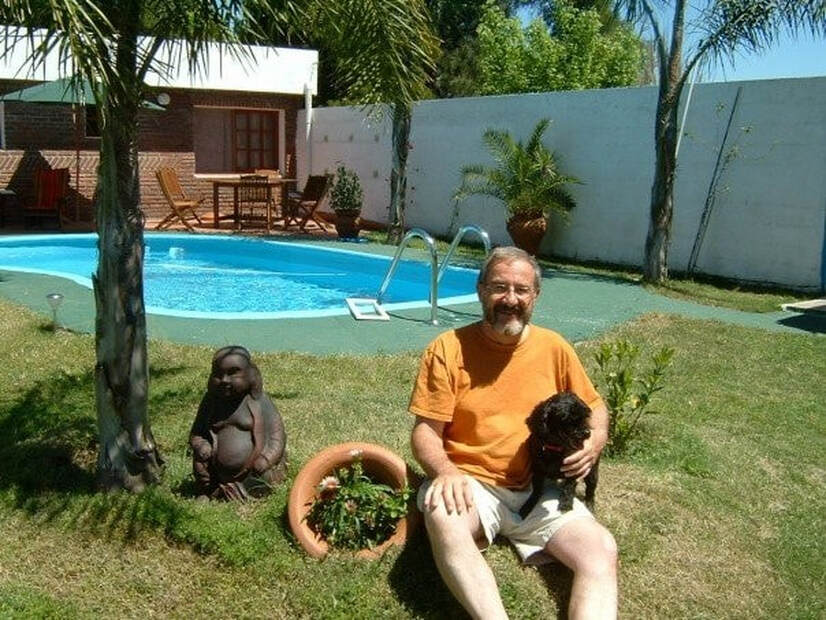 Casa Inspiración – 2007
A month later, I wrote this poem.

BORN IN THE YEAR OF THE DOG

My human life experience
Without the dogs would not make sense;
My first was Pat who guarded me,
In baby buggy ‘neath a tree;

A Cocker Spaniel black and white,
Through childhood rarely out of sight;
He shared his life for fifteen years;
His death, my loss, brought teenage tears;

My friends back then had dogs I knew,
Like Sandy, Spot and Skipper too;
Or Boozer who found thinking hard,
And Sparky, a great Saint Bernard;

Two decades through my adulthood,
I owned no dog; nor thought I would;
Shared dogs of colleagues that I met;
Just one stray cat, my only pet;

But when the dog next door had pups,
My life would change, and quite abrupt;
We brought one home to live with us;
Soft fur and wiggles, our Rufus;

He did what all bad puppies do,
He peed, he pooped, found things to chew;
The bad things lessened as he grew,
And Rufus somehow changed to Boo;

All brown and black with golden fleck,
With breeds too many to detect;
He was quite smart, our strong-willed Boo;
He trained us well ‘til nearly two;

But circumstance would alter all;
A dog in need; we heard her call;
And Didi now joined with we three;
We were a two-dog family;

She cringed in fear of people wrath;
Her life before no easy path;
But our love overcame her fears;
It was the start of her good years;

When groomed she was a true beauty;
Australian Shepherd and Collie;
All mottled grey with black and white;
Her eyes now shone from inner light;

Insep’rable were she and Boo;
Shared food, shared walks, and things dogs do;
He was the leader of the pair;
It is dog’s way; she did not care;

But sometimes when they were at play,
She showed her teeth and got her way;
Together through ten years up north;
They spent their final years down south;

When they were gone, my wife was too;
A dog-less life I lived anew;
My business consumed all my time;
Without a dog I was just fine;

Or so I thought, until one day
The local vet chanced hear me say,
I might consider one again,
If homeless, small, and housebroken;

A week had passed, I’m sure not more;
A small black dog came to my door;
Abused and needing loving care,
I called him Simon, then and there;

Adjustment to life at my inn,
A battle that I had to win,
Took quite some time; but when I did,
His love suppressed, no longer hid;

I was his daddy; he my son;
My life now bright; he’d brought the sun;
He shared with me all guests who came;
I gave him love; he’d eased my pain;

A lady came into my life;
I did not know she’d be my wife;
But Simon sensed right from the start,
That she belonged; she’d won my heart;

Eventually we became three,
And Simon was as pleased as me;
We walked, we biked, we canoed too;
It was a good life that we knew;

My business changed; old ladies came;
For Simon ‘twas a brand-new game;
He won them over with great ease,
To feed him lots of dog cookies;

As always happens, life moves on;
Her business sold, my wife was gone
To Uruguay; to our new home;
We only talked by telephone;

I thought we’d join her in no time,
But months went by before I’d find
Us both on plane to Uruguay;
Our lives to live in a new way;

Now here in Uruguay we sit;
Our house, our pool, all bright sunlit;
As Gundy knits; I write poetry;
And Simon keeps us company;

How many years he’s yet to live
Is something only God can give;
But I am sure my life will be,
Ne’er long without a dog with me.

It has been nearly thirteen years since I wrote that poem.   We lost Simon two years later, but we had already acquired Kiya.   Kiya was eventually joined in turn by Jordan, Leah, Sofia and Lorena.   All were rescue dogs.  All five continue to live with us.  However, we are not adopting any more dogs, so one day Dog Days In Uruguay will be completed.   Before that time, perhaps I will have an opportunity to share some more bits from the intervening years.   I hope you enjoyed the start. Comments welcomed.