5am Sunday. A rooster opens up a conversation with a braying donkey somewhere on the hillside and they’re not shy about sharing their opinions. I mentally pushed "snooze" and rolled over. I planned to be up early for the longest ride of the trip so far - 70 miles. There was a sharp chill in the mountain air as I stepped out into the Algodonales morning. Sevilla sits in a geographical basin in the valley of the Guadalquivir River and benefits from a subtropical climate. In simple terms, it was going to get much hotter as the day wore on and so I intended to pace myself and resolved to stop at each petrol station to buy cold water. Regular drinking would be critical to stay hydrated. My prep notes told me that I should check that I have everything I need at El Coronil, since after that point there are long stretches of ‘notmuchness’ in terms of fuelling stops for at least 30 miles or so.
As the sun rose into the day I eased along through waving masses of golden wheat fields and sunflowers breaking out their yellow fanned faces towards the sky leading me down to the delightful little town of El Coronil, a short hop off the main road at the end of an avenue of palm trees. Cars whip by the main junction, heading for Ronda or Sevilla, not realising that down the hill is a little gem with a plaza just made for the Sunday papers, a coffee and conversation. Prayers said for the day, the gentry find a shady spot in the square to trade stories and diagnose creaking ailments. Bars are starting to open when I arrive. People hail their friends for intense exchanges as if they haven't seen them for years.
I sipped coke, ate honey and tostados, and wiped dead flies from my shins, content as a group of mountain bikers came through on their club ride.
Back on the road in the hair dryer breeze, by 1.30 I had about 12 miles to go.
I messaged my hostess from a petrol station (cold water refill) to say that I would be early. No problem. I was whipping along. Oh, how pride comes before a fall.
My plan was to enter Sevilla by a route that would take me directly to my apartment and by some fortitude the slip road from the service station took me straight to the junction that I needed. I couldn't believe my luck. However, Mr.Garmin and I had an exchange of words. He kept telling me to u-turn and after a couple of these false starts I realised that I was going around in circles. But I was only 5 miles from Sevilla. What could go wrong?
To cycle into Sevilla you need to have your route planned meticulously, it seems. Take this from someone who has now experienced it. Cycles are banned from the major A roads into the city even though you've been on the same road for the last 50 miles.
So it was that I found myself at a roundabout facing A roads to Malaga, Jerez and Sevilla and the only other option, somewhere called “San Pedro”, notified by a rough, hand painted sign. "San Pedro” it is then.
I began to feel a little uneasy as I bounced along a moon-cratered dirt track between slatted sheds and corrugated shacks, junked cars, machinery and broken glass. I could hear raucous voices and laughter from the ‘chabolistas’, shanty-town dwellers, but saw no-one, and I hoped that I wasn't going to attract any attention. I felt that this was probably the last place I should be right now. A guard dog thought that I was sport and gave chase, yapping alarm until I managed to outrun him. What am I doing here?
I stumbled out onto a minor road unscathed and thankful but my bike was limping. Impossible to dodge everything as fast as I could, I’d whacked the rim of a pothole resulting in a hole in my tyre.
By now it was 35 degrees and I'm by the roadside repairing my tyre, getting hotter, hungry and tired. I needed to drink, but my water tasted like I'd done my washing in it. During the next 20 minutes I was passed by half a dozen different vehicles of some sort. One asked if I would like a lift in his truck, with the bike in the back, and 3 more stopped to see if I was okay. I remembered a conversation with my Spanish friend before I left home. I’d said I was worried about mechanical failures on the road. “Don’t worry,” she said, “there’ll always be someone to help you.” And so it seemed.
Sunday siesta Sevilla. Six lane highways and hardly a car in sight. It had taken me two and half hours to work out the last 12 miles. My hostess greeted me with a smile and handshake. She didn't seem to mind my oily fingers. She was a cyclist too and we joked about punctures - usually the back wheel - the dirty one. She poured me ice cold water from the fridge and I drank like a man who’d just crawled through a desert. It had indeed been a long hot ride. I was in Sevilla at last. I just love siestas. 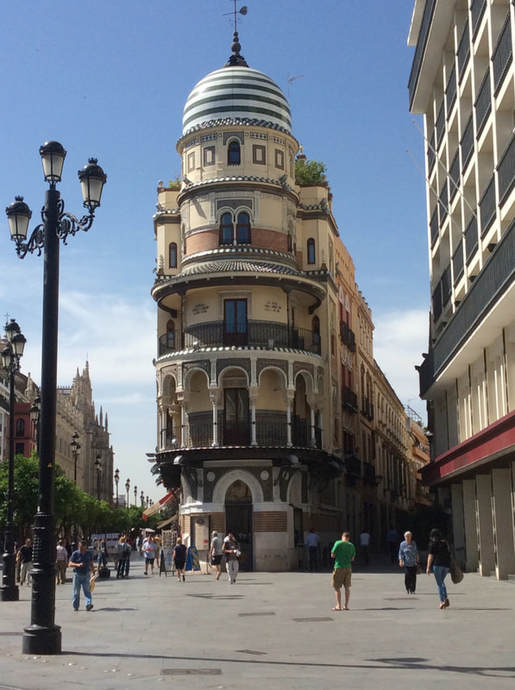