Of bicycles, maps, and mail drops by Dede Montgomery

​Fresh out of college, I bicycled through Europe with my best friend for just over three months. Emails? Google maps? Cell phones? Rubbish – not, in those days of 1983! Though not much of a mechanic, I had worked in a bike shop, and begged Karen to change at least one tire before we departed. We left our parents with our diplomas and mail drop addresses for Oslo, Munich, Cannes, and Zurich.

After our arrival at Heathrow, we unboxed and assembled our bikes outside the airport to the curiosity of double-decker bus conductors, and off we pedaled. Onward through parts of England, Holland, West Germany, Sweden, Denmark, Austria, Switzerland, Italy and France along quiet rural roads, cobblestoned towns, and bustling cities. We stopped at cathedrals and castles and museums–sampling pastries enroute and chocolate at night. A whole bar, each.

In Sweden we discovered forests and lakes reminding us of our native Oregon, and occasional long gravel dead-end roads. One night we were interrupted after retiring extra early in our itty-bitty tent by yells of kids and the blamamamamamamaaaaaaaaaaa of motorbikes. We had, in fact, camped in the middle of a motocross circuit while taking advantage of Sweden’s “Freedom to Roam.” As we neared the Norwegian border, late June rain morphing into snow, our frozen fingers and toes commanded us to change course. We ferried to Denmark where we found “Hamlet’s Castle” and topless beaches, buttercups and rolling hills, and for my first time, punk rockers in Copenhagen.

Today it might seem unusual to pick a route each morning over a crumpled paper map while eating a baguette and jam, awaiting the cup of coffee or tea that will be served miles down the road. We hadn’t yet aged into the comfort of knowing a daily itinerary. And so, it was in Austria we sweated our way to Neuschwanstein Castle – originally commissioned by Ludwig II of Bavaria and inspiration for Disneyland - and in France, Karen and I wandered into Monet’s Giverney in cycling shorts, touring the garden famous for water lilies. We learned about most sights by road signs, on our route selected for the day. We joked about how we “led” the Tour de France as we passed near the race’s course in Limoges. Such spontaneity also led us to encounter a trench-coated flasher not once, but twice on a French beach, and a young Italian police officer just outside Pisa, who we believed might confiscate our passports. Perhaps he was merely warning us – we didn’t speak Italian – that we were crazy to be headed on this road. We interpreted our map of this Cinque Terre region to exude lovely Riviera views, not roads unfit for cyclists. Too late we encountered long, dark tunnels, and steep – sometimes unpaved roadway sections. And when finally descending into the town of Levanto late one evening, elated to spot a train station, we booked the only pensione available, complete with a five-night minimum, before taking a train to Cannes, France. We splurged on what we called, “a vacation from our vacation,” rather than spend another night in a local cemetery, an experience we’d already had.

Certainly not worldly, we were also naive.  Perhaps it was intoxication by chocolate – sweet wafts from the Lindt Chocolate Factory – that led to a minor railroad crossing crash and our selection of a fancy Zurich hotel for that night’s lodging. After nights camping and staying in hostels, we wrongly assumed its expensive rate to include whatever we wanted from the full minibar.  What wanderer wouldn’t sample each bottled alcoholic treat after such a day?

It was at the station, after placing the balance of the shocking hotel bill on our emergency credit card, awaiting the train to transport us over the Alps to Florence, where we met Karl. This mail carrier was just a few years older than us and eager to practice the English he was learning via BBC language tapes. Benefited by his halting English, accented British Swiss German, we agreed to put our bikes in the trunk of his tiny car before speeding off to his family’s bakery in the wee town of Horgen. There we shared morning coffee with his parents – complete with “so-so’s” and “ya-ya’s - as Karl headed off to work. On his day off we hiked up into the Alps, accompanied by distant yodeling in this Switzerland of our dreams.

As we prepared to enter Paris we regretted that we had mailed our helmets home earlier. During that first leg of our trip we disliked how helmets identified us so clearly as Americans as we cycled Holland’s benign bike paths. Over two months later we prayed we would live through this Parisian inbound ride, maneuvering triple-lane roundabouts teeming with cars. We were smart enough to exit Paris by train, and decades later I embarrassedly admitted to my daughters to have biked through Europe helmet-less.

I do smile today at the simplicity of our reunion at London’s Windsor Park, following a week traveling solo in this country that spoke our language. We had gotten darn sick of each other: two friends traveling together in foreign lands, sleeping inches apart in a tiny tent.  I headed south to Rye, and I’m still not sure where Karen headed. Yet, we both showed up on the appointed day at noon – a few days before our flight back to the U.S. I have wondered what we would have done – back before cellphones and email – if one of us hadn’t appeared? We never considered the option. While this journey was one of friendship, perseverance, and exploration, it was the simplicity and joy of our reunion that reminds me just how special the trip was. Travel will never be quite the same since those days before our love affair with electronic gadgets – some may say better, others claim worse – but never the same. 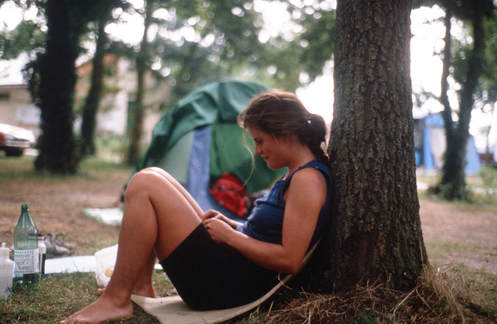