I can take chaos but only in small doses. Overstimulation for long periods drains me. Needing to ground myself, I get away from the noise for a few moments of silence. I feel my head clear instantly. I am introverted by nature and avoid large crowds preferring one-on-one, face to face, meaningfully rich conversation. I have always been uncomfortable in a roomful of strangers, felt different, never quite fitting into social situations, a type of social anxiety I suppose. I feel odd, out of place, disconnected from the present era like I have an ancient secret but I do not know what it is I keep. Yet, I feel powerful inside because I carry this mystery.
I have never wondered why I possess these feelings and behaviours. I know traits have been passed down to me from the people who came before. They are also products of my environment, those who influenced me, the experiences I have had and my education, not only physical characteristics but the internal workings in my brain, my chemistry. But I have come to believe that perhaps even memories, desires in the form of energies encased, I too have inherited. I have experienced sensations significant enough to make me question the possibility.
I remember physical sensations long after I experience them. I can recall these kinaesthetic feelings instantly and feel them again, remembering anything and anyone who touches me. Old places trigger unwarranted sensations flooding me with spontaneous emotions I cannot control or explain. I will never forget leaning against the dusty earthen walls of an ancient cave dwelling carved in to the massive red rocks once occupied by prehistoric, nomadic, people in Sedona, Arizona. I suddenly felt my heart racing and I was overcome with terror. I felt light-headed and I had a thought, an image of terrified brown-skinned, children screaming, huddling together with their little hands up shielding their faces, half-peaking through their fingers, crouching and trying to hide behind each other with nowhere to go. I felt panic rising in my chest and I wanted to scream.
Trying to steady myself I pulled away from the wall of the cave and crept out through the opening where a Park Ranger was standing guard. As soon as I was out of the dwelling, the sensation quickly passed and left me. The Ranger did not seem surprised by my emotional and physical response. I asked him whether something tragic had happened in the cave. He told me it was a nursery for Anasazi children and babies. They were trapped and all were massacred. I felt sick, literally. He went on to tell me many people have reported feeling nauseous when inside the dwelling. And that he had experienced strange things himself. I was so stunned that I did not ask any more questions like, who had killed them and why or why the ancient Anasazi needed nurseries in the first place. I never asked about what he had experienced. I was so curious. Since he stood on that land all day long, I wondered whether he was vulnerable to energies before he was assigned to this National Park or whether ancient vibrations had latched on to him. Had he chosen that assignment because he felt drawn there? I wondered. Instead, I walked away slightly trembling, trying to wrap my head around what had just happened to me. 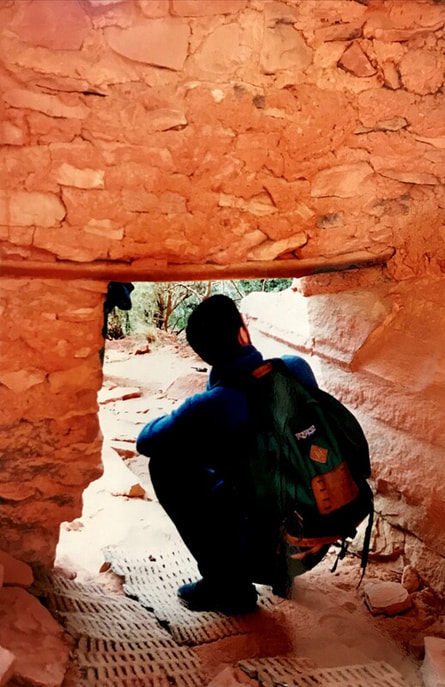 I took this photo of my husband inside the cave right before touching the wall.
​
I think of this experience as a type of blood memory passed down and stored deep in the fibres of my muscles that when triggered, bleeds to release its tension, that I may be connected to that place somehow or to the people. Perhaps the horror that occurred on that rust coloured, clay, ground and those walls was trapped in the form of violent energy that I absorbed when I leaned against it with my bare hand. Perhaps I am what spiritualists call, a Sensitive, a person who can sense energies in people, places or objects or an Empath, one who absorbs energy, deeply internalising emotions and physical sensations emitted by a person, place or thing. I suppose that makes me an Empath. If that is the case, then I am grateful that the soles of my feet were protectively in my socks and sneakers.
Spiritual people with an aptitude for reading a person's energy connect with me. I understand. I have it too. And when I encounter them, we recognise it in each other and seem linked. There is a hum between us, a type of subtle vibration which has a calming, grounding effect on me. Sometimes, if it is intense, my gums feel numb and a buzzed feeling comes over me that rushes to the bridge of my nose. My jaw tightens and my teeth chatter. Despite these weird physical sensations, I feel emotionally comfortable, safe and open in the presence of such people. We often do not need to talk to communicate, to understand each other. Meeting them is rare. But when I sense fearful people with frantic energy, I guard myself. I suspect they will take something from me, manipulate and use me. I find such people untrustworthy, dangerous and draining.  I feel exhausted and vulnerable in their company, off-balance like I may be scarred by their internal chaos. My father also mistrusted crazy-makers and would leave the room in the presence of an unstable person. I am much like him.
My father was abandoned by both of his parents when he was three months old and struggled with anxiety and depression his whole life. He had a deep seeded fear of abandonment. He too was introverted and severely uncomfortable in crowded places. He lived through an era of horrific violence in his native Colombia in South America. Science has newly proven that traumatising events change our DNA and that the memories from traumatic events do get passed down from our ancestors in the form of anxiety and post-traumatic stress disorder. He may have passed his traumas down to me, which means they may have been passed down to my children. We already know that our chemistry is genetic and stored in the brain. But now it appears that feelings may be stored in the body and can resurface.
This may explain why I have often struggled with feelings of abandonment when nothing could have been further from the truth. I had a stable home, loving and caring parents. Yet, I cried all the time as a small child, for hours when my mother had to leave my sister and me in the care of her trusted friends to go to work. It was more than the natural detachment fear that young children experience when a parent is out of their line of sight. I was terrified that she would leave us and never come back, that we would have to grow up alone and make our own way through life without guidance, that I would be responsible for caring for myself and my younger sister. And even though our mother always returned, the fear stayed with me and I carried it deep inside.
​            Fear became a part of my being. I have spent a great deal of my life confronting my unwarranted trepidations, actively lifting my mood and social awkwardness. I see myself in one of my children. It is quite possible that I have passed these traits down to him along with the blood memories of his grandfather and his great-grandparents. Who knows why my paternal grandparents deserted my father? What traumatising events did they live through? Perhaps I can leave my children with ways of coping, ways of dealing with inherited impressions that do not belong to them, breaking the cycle of the ancestral scars we carry. 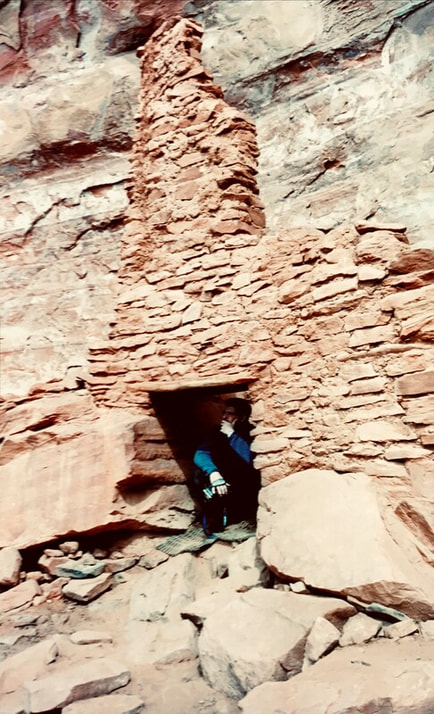 Cave dwelling of the 'Ancient Ones' in Sedona, Arizona ​