Life in Marina Hemingway, Cuba, before year 2000 by Denis Dextraze

Marina Barlovento was built in the Havana suburb of Santa Fe some 9 miles from downtown (23’ 5.35”N, 82’ 30.5”W) by American companies just before the revolution of 1959.  It consisted of four long 12 feet deep curvy channels with one common entrance from the sea. It could accommodate 400 vessels but only 100 clients had access to services. An ingenious system of underground drainage between the channels and the open sea allowed circulation of clean sea water in and out with the tide.  It was later renamed Marina Hemingway for marketing reasons.

After one month of challenging sea crossings, our first impression of Marina Hemingway was that of two pour souls having been in a desert for many weeks and finally finding an oasis with 4 stars hotels in it! In those days, Marina Hemingway had all the amenities to attract the foreign sailors and tourists.  The elaborate facilities kept them in this gated community in order to prevent them from contaminating the general communist indoctrinated, not to say brain washed, population.  The same was happening in other tourist areas like Varadero where the tourists were herded into totally controlled chartered buses for supposedly their own safety.

In those days, the Marina had quite a few attractive features to keep its patrons inside.  It had two four stars tourist hotels catering to tourism. The multi-storied El Viejo y El Mar (The Old Man and the Sea), another marketing scheme named after Ernest Hemingway’s famous prizewinning book, featured a daily copious buffet type brunch. Hotel Acuario was a row of two and three storied rooms along the channels. The pool was located right across from where we were moored in channel # 2. From our vantage point, from noon on, we could watch couples dancing around the pool at the sound of Latin and pop music and laugh at the comments of the disc jockey. We had a prime spot for entertainment.  The Marina had three pools, five bars, five restaurants not counting the hotels, two tennis courts, a bowling alley, one commercial center, one Cuban cigar store, one fancy discotheque, one excellent French bread shop, Pain de Paris, and a well stocked duty-free store with very low prices.  There was no problem inviting Cuban friends on board, though you needed to get a special pass which was readily available from Isaura, the dock master’s secretary.

Rolf, who had had a tough life so far from all our cruising incidents, had come to the end of his voyage but was in no rush to leave.  This place was the perfect playing ground and he took full advantage of the facilities. At first, I spent time socializing with my dock neighbours of various nationalities and backgrounds. During that period, there were many Americans but also Canadians, Germans, Dutch, Frenchmen, Spaniards, Argentineans and others of various parts of the world.  Just like in any international harbours, they came from an array of social standing and education.  Some were rich, others were poor; some were educated, others were illiterate; some were married, others were bachelors.  We had here a micro sample of a worldly society including smugglers, refugees from law and escapees.  We all shared though a common interest which united us: our world of cruising the open sea. This cocktail of backgrounds created friendship between odd partners who would have never socialized in the real world.  But we were not living in the real world.  Before the end of the 20th century, we were living in a synthetic environment created just for us in a Marina belonging to communist Cuba.

When I left Cuba for good 12 years later in 2012, Marina Hemingway was nothing but a shadow of what it had once been when we first came in June of 1998.  The decrepitude of the site was a result of a succession of managers who were appointed because they were good communists but were totally incompetent, the result of 50 years of unchecked dictatorship.  The tourist hotels were gone and left to rot from lack of maintenance.  They had become cheap bivouacs for foreign patients seeking medical care from Latin American countries close to the regime, like Venezuela. At one point, Hotel Acuario was converted into a hospital specialising in eye operations for foreign patients.  The Acuario “hospital” was closed down after two patients were lost by falling in the fenceless channel. I guess that the brilliant planners for the Acuario ophthalmologic hospital did not realize that blind people can’t see. The tennis courts had been bulldozed to make room for a children’s attraction park which lasted only one summer.  All rides finally stopped working from lack of spare parts and maintenance.  The many brand-new German generators were never used for lack of fuel which had been stolen and were probably jammed from being exposed to salty air for many years without maintenance.  The discotheque was a pile of rubble.  The French bread company, Pain de Paris, had been siezed by the Cuban government. Their baguettes and croissants had been Cubanized and were inedible.  Flooding from many hurricanes had damaged the electrical, telephone and water lines and left many pierside service stands inoperable. The duty-free store resembled the Cuban pesos stores in town for featuring empty shelves.  Visiting passes for Cuban nationals were no longer available unless you showed a Cuban wedding certificate. There was only one decent restaurant left, the Chinese restaurant.  It had been originally officially opened by a Chinese delegation.  China was considering investing in Cuba and Cuba was flirting with them in vain so far. 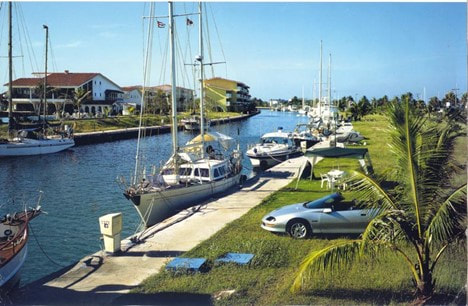 Aventura and Camero in channel #2 of Marina Hemingway