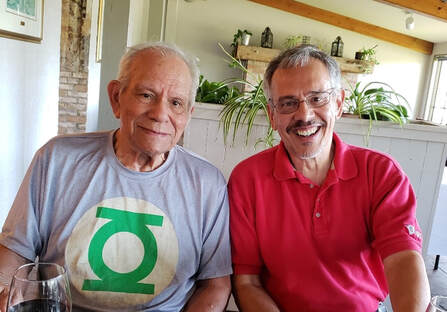 Dad & Me
It was on the ride home that day, ten days before he died, that I realized how serious things were.

“I want a pill to go off,” Dad said. He was hunched in pain in the passenger seat of my car. This had been his second visit to the hospital in two weeks, where all tests had revealed “everything functioning within acceptable ranges” – i.e. he had no lurking cancers, failing stents, or looming dementia. But they couldn’t figure out the crippling streaks of pain that emanated from his back and spread to his legs, leaving him gasping. So, they gave him pain killers and sent him home.

“You have to be in sound mind, and two doctors have to assess you before you can go through with that procedure.”

“Do it then. My mind is made up. It’s irrevocable.”

I didn’t want to pursue this morbid subject. But given the extent of trauma Dad had suffered in his ninety years, I think his body was just giving up on him. I have written two stories about my father, both previously published, that chronicled his adventures with his crooked spine: the bout of polio as a child that started it, being hit by a car while out walking, being blown out of a plane, being on a runaway bus that crashed into a building, being run over by a minivan, the two near-fatal strokes, and the countless falls in his nursing home because he refused to exchange his walker for a wheelchair. I figured I still had to write his last chapter, and perhaps this was it.

“You sure you don’t want to change your mind?” I asked, as we entered his nursing home parking lot.

“It’s irrevocable. They treated me horribly in that hospital. Not even a glass of water for the whole day. If you hadn’t come to pick me up, I would have been sitting in a chair waiting for the transport that could come only at 3 a.m.”

That was true. I had been livid when the nurse had phoned to advise me of that fact. So, I had changed out of my pyjamas to rush to the hospital at 10 o’clock to pick him up that night when the medical staff decided to discharge him because they couldn’t find anything “wrong” with him, and didn’t want to use up another bed during this pandemic.

“If they can’t find a solution to my pain, then I have to find my own solution,” Dad said.

Early the next week, Dad’s doctor visited him to assess his eligibility for MAID. I was dismayed when the doctor was up front with us and said that due to his Hippocratic oath and moral stance, MAID was not his preferred route.

“So, you would rather I suffer in pain and die slowly, than let me go off with a pill?” Dad asked, the disappointment and disillusionment clear in his face.

“We can keep you comfortable while you pass naturally,” the doctor replied.

I lost it at that point. “So, for moral reasons, you would let a person die in stages, drugged to the eyeballs, rather than let him pass quickly and humanely like we do with our cats and dogs?”

The doctor shrugged. “This is our reality. In any case, I will start your MAID application, but it won’t be me who will do your assessment and administer the process, and it could take some time.” I thought I was seeing Pontius Pilate washing his hands in public before a bleeding Jesus Christ.

“What are my other options?” Dad asked.

“Well, Sherman, if you keep refusing food, like you have since returning from hospital, you will die like your wife did. (My mother too had died in this nursing home three years ago, when she just quit on the world and stopped eating). I had heard that Dad was refusing food, but this was the first time I heard that he had been refusing ALL food. This was a man who loved his food.

“Hard to say. A week to ten days, given your physical condition and age.”

“I’ll take that. That I can control.”

His rapid decline began after that. He continued to refuse all food. The pain was relentless, alleviated only with stronger and stronger drugs. He stopped engaging in his favourite pastime: watching sports and politics on TV. In fact, I had to tell him that Djokovic won the 2021 Wimbledon Championship again, for Dad was unable to sit up to watch TV beyond the semi-final games.

He was declared palliative a couple of days later and my brother Dane and I were allowed to visit the nursing home again (thank you, Covid, for taking that privilege away from us for over a year!)  Before he lost his senses, Dane and I arranged for video calls with our dispersed family members around the world, all of them still huddling in their respective bubbles (thank you, Technology, for giving us new communication tools during this pandemic!). He bid them all goodbye in his inimitable and stoic way, and said how proud he was of all of them.

I was the last to sit with him before he slumped into his final coma.

“You’re a stubborn bugger. You’ve not only taught us how to live, you’re showing us how to die, on your own terms.”

There was a faint glimmer of a smile in his face. “Thank you for everything, son” were his last words to me.

I visited the next day as he snored, gasped, choked, and rattled; all systems were shutting down, but he was blissfully unaware of it all. He had achieved peace at last. The following morning, he was pronounced dead.