​When my friends talk about their hometown, the place where they grew up, I can’t relate.  As the only child of a career military man, a “Navy brat,” I always knew our home was temporary – that within a year and a half my father would receive orders that would send him either to another military base or out to sea.  I had already lived in California, Texas, North Carolina, Virginia, and Tennessee when, in 1956, my mother and I boarded an iron-gray military ship that carried us through the choppy Bering Sea to Kodiak, Alaska, where we then boarded a military plane that bore us to our new home in Adak, Alaska.

I recently Googled a few articles about Adak and was amazed at how much I remembered about the terrain there, even though I was only nine years old at the time.  Adak still is an ironic combination of rare beauty and soul-sucking ugliness, like I have never seen.  It is a dead volcano, part of a necklace of islands in the Bering Sea called The Aleutians, aligned with the southernmost tip of Alaska. But its terrain is nothing like what we think of when we picture Alaska.  There are no majestic glaciers or pristine forests.  There are no beautiful wildflower meadows in the summer, because there is no summer.  The vegetation in Adak consists of a spongy prairie grass called Tundra.  There are no trees, shrubs or flowers, except for the rare wildflower, because of the harshness of the weather conditions there and the fact that the ground underfoot is rock, not fertile soil.

Adak was not a good playground for a child because the weather was always cloudy and usually cold, rainy and windy.  The terrible straightline wind there even had a name – the willowaw.  In the winter there was snow, but it never lasted long, because the wind and the rain quickly swept it away.  My few playmates and I rarely got to play outdoors because of the inclement weather.  I remember we did have two days when the clouds parted during our time there, and our elated babysitter took her charges to the rocky shoreline to enjoy the sun. Those were the days before sunscreen, and we all came home with serious sunburns because we were so unaccustomed to the sun’s rays touching our paper-white skin.

Fresh food was at a premium there, so we drank powdered milk, and our fruits and vegetables came from a can.  Paradoxically, though, Adak was a huntsman’s and fisherman’s dream.  With wild caribou and ptarmigan and the biggest crab and shrimp I’ve ever seen, there was no end to protein-rich sustenance available.  I’ll never forget the day my dad and I watched the wild salmon swim upstream to spawn, flipping in and out of the waterfalls in scores.  When we climbed to the top of the same rocky hill those fish had climbed, I was shocked to see a huge, crystal-clear pool, with dozens of dead and dying salmon floating aimlessly.  The bottom of the shallow pond reflected a rainbow of colors – millions of salmon eggs already deposited at the bottom.  It was a beautiful, horrible, awe-inspiring picture.  I recall the childish sorrow I felt for the salmon still living, as the pond was surrounded by fishermen, eager to catch an exhausted, battered salmon to bring home for dinner. All that hard work, only to be snared and gutted, sometimes still full of eggs, by a heartless stranger. 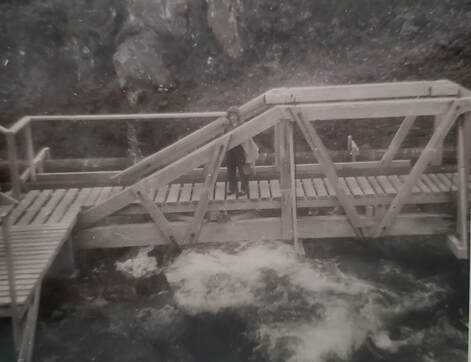 Most of the island was inhabited by Navy personnel; there were very few native Aleut children in my school.  The island had been established as a U. S. Naval air station after World War II, but during the war it had been used as a base of operations by the Army, because the nearby islands of Attu and Kiska were occupied by Japan.  I remember hanging my legs over a manmade cliff, gazing at the deserted WWII hangars and airstrips at the bottom of a huge excavation, when my friends and I took advantage of the rare mild days that we could play on our sleds in the tundra.  In fact, our first house, before we were moved to a base duplex, was a quanset hut, a residual of the war. My dad made extra money in his spare time operating machinery that tore up the old airstrips and facilities left from the war.  There were several civilians who lived there for that same purpose, drawn to the island by the excellent wages.

Ennui was a way of life in Adak. There was no television reception when I was there, and very poor-quality radio, so I spent most of my free time playing in my room, drawing, or reading.  The only other entertainment when I was there was a small library, an indoor swimming pool, a movie theater with a sparse collection of movies, a cantina, officers and enlisted mens clubs where the booze ran fast and free, and house parties that usually turned into free-for-alls. It was during our dismal stint in Adak that I realized my father was a raging, verbally abusive alcoholic. (We learned decades later he had Bipolar Disorder.)

But it wasn’t the boredom that prompted civilians to leave the island in droves, and the Navy personnel to nervously count the days till they got their transfer orders.  It was an act of nature. On the night of March 9, 1957, an 8.6 magnitude earthquake literally rocked our world.  Even after 60 years, I remember every detail of that dreadful event with absolute clarity.

What woke me was the sound – like I was standing next to train tracks, with the train rushing by at top speed.  My bed was bouncing around like a feather tossed at sea.  I was screaming, but the quake’s noise was so deafening, I couldn’t hear myself.  I could see my parents trying to come for me in the short hall between our bedrooms, but they were tossed from wall to wall as if they were on the undulating floor of a carnival funhouse.  My father finally grabbed me, and we somehow all three made it the short distance to our living room, where a big picture window revealed the bizarre scene outside.  The ground was rolling, like water washing in to shore.  My first childish thought, looking at the glowing light emanating from the cracks that were opening, was that a volcano had erupted, but of course my parents knew it was a massive earthquake.  My dad was in a frenzy, pacing back and forth, as best he could without falling, shouting and watching the world fall apart outside.  I was certain we were going to die, but when my mother pulled me into her arms and sat down calmly on our sofa, holding me tightly in her lap, a sense of peace that I can’t describe in words bathed me in its light, and my sobs and racing heart grew quiet while we waited for the quake to end.

The end for us, though, was the just the beginning for others.  The earthquake radiated away from us and made its way through the Pacific Ocean, causing damage all the way to South America. Experts said the main earthquake only lasted about five minutes, but that five minutes took years off all our lives.  When our duplex neighbors knocked on our door, they had the same shell-shocked expressions we must have reflected back to them.  Yet, besides some broken lamps and figurines, our homes were intact.  And the story was the same throughout the base.  Because of the earthquake-proof construction of the government buildings on the island, most of them remained intact.  The only injury had been a sailor who was slightly injured when a small tsunami crashed into the building where he stood watch.

The following morning, the brave ventured out to see the damage to the terrain.  Most of the ground looked like the bottom of a dried-up lake in the desert – tiny little spiderweb cracks everywhere.  And many of the roads were impassable, with cracks in some of them big enough for a person to fall in.  My dad took pictures, one of them of a buddy who climbed into one of those cracks to illustrate its magnitude.  Idiot!  A tiny island off the rocky beach where we sometimes walked had totally disappeared. And the aftershocks continued, some of them quite strong, until my dad got his orders, and we were sent, relieved but psychologically damaged, back to terra firma.

Knowing what I know now about mental illness, it’s clear to me that when I left Adak, Alaska, it did not leave me.  The combination of the horrific earthquake, desolate terrain and harsh climate, and my father’s runaway alcoholism and erratic behavior there left an imprint on me that has lasted a lifetime of battling depression, panic attacks, and night terrors.

Researching the symptoms of Post-Traumatic Stress Disorder in children, unquestionably I suffered from PTSD after we returned stateside.  I was plagued for many years with unreasonable fears and ever-present anxiety, waking up frequently with a start, thinking my bed was shaking and convinced the world was coming to an end.

And though I have outgrown most of my unreasonable fears, anxiety has been my constant companion throughout my life – sometimes more obvious, sometimes less.  Panic attacks and sleep terrors have revisited in cycles, with long lapses between recurring episodes when I exhibit no obvious symptoms. Would I be a different person if I had not lived in Adak, Alaska for that short span of my childhood?  It’s impossible to say.  No doubt I have a genetic predisposition for mental illness, but I’ll always blame Adak, Alaska for flipping the switch on my neurosis.

When we lived in Adak, the population of the island was fairly large, and at one point reached around 6,000, even sporting a McDonalds and a small college serving the island’s inhabitants.  But after the base closed down in the late nineties, the population dwindled rapidly, and as of 2015 had shrunk to only 332 hearty souls.
{ https://en.wikipedia.org/wiki/Adak,_Alaska} Looking at current pictures, I was dismayed at the rotting blanket of abandoned hulls of buildings left behind by the Navy.  They paint a picture of an even more ghostlike desolation that makes Adak a place where nobody wants to be, most of all, me.