FORGET THE ROYAL WEDDING.
THIS WAS THE WEDDING OF THE YEAR.

The picture posted online was taken on a beach, my son in the distance with their dog, his girlfriend lagging behind to take a close up shot of the engagement ring on her finger. This was the only indication I had that my son was at last planning to get married.

They’d been together for years, way before deciding to move to New Zealand from the UK. My son had lived and worked in other countries. Canada had been a contender as a permanent base for a while but he returned to the UK after a year, met his present girlfriend and was smitten. But the lust for travel was still an itch that needed scratching. Together they arrived in New Zealand’s South Island for an extended holiday which has never ended.

They now have a beautiful bespoke home, a crazy dog and jobs they both love. My son is a fire fighter and his fiancée has her own business as a creator of cakes, adorned with fresh flowers, works of art in their own right.

Would I travel to New Zealand for the wedding? I was invited but it was a flight too far for me. I neither had the cash to splash nor the mental capacity to navigate the airports and length of the flight. My refusal was probably expected as anything out of my comfort zone sends my brain into a tornado of anxiety but I got the impression that there was significant upset when my son’s future parents-in-law and sisters-in-law also said they couldn’t be there.

As their wedding day drew near I suddenly had one of those light bulb moments, a rare event these days. Should I risk mentioning it to my son, or will I get shot down in flames? “Nah! Go for it girl.”

“Couldn’t you set up Skype somehow, so your future in-laws can watch the wedding as it happens?”

I expected a negative response but my son thought it was a great idea, if it was possible. I didn’t know at this point that the location wasn’t really going to lend itself to technology.

Hours before the wedding, my son contacted me. If he could set it up would I like to see the wedding on Skype? The ‘in-laws’ were unable to take part for reasons that I wasn’t privy to, although they both work and I’m retired. It would mean being awake in the early hours of the morning but that was normal for me. I was certainly up for it in every sense of the word.

When it comes to technology, I do not shine! I’m so far back in the cave of ignorance I should still be using smoke signals. My son bought me an all singing all dancing cell phone, to replace my mobile phone that only – well – phoned people and sent text messages, a dinosaur of a phone!
That ridiculously expensive bit of kit expired on me before the warranty did. It was replaced without charge but I simply don’t trust technology. I always expect it to fail and my timidity ensures that it always will.

So when I opened my laptop, only minutes before the start of the wedding of the year, to find a raft of updates were required before Skype could function, the conspiracy theory against the technophobes was confirmed. I panicked and began frantically clicking here, there and everywhere to achieve a functioning link with New Zealand. Seconds after the final click and too close for comfort; there came the familiar sound of somebody trying to connect. My son’s face appeared on the screen in the frame of a cell phone.

“I’m handing you over to a mate of mine who will hold the phone so you can see the wedding.”

He was gone and a lovely guy, whose name I never knew, was holding me so that I could see and hear all that was happening.

“Is this okay ‘Mum’? Can you see what’s going on?”
My handler’s voice came from thousands of miles away but he could have been seated by my side.

It was more than okay. It was perfect. We were by the side of the River Clutha in autumn. Many of the trees were already naked, but with the carpet of autumn leaves and the water as a backdrop, the location was magical. Standing together at the river’s edge, the nervous bridegroom and the celebrant awaited the arrival of my son’s wife to be.

My handler directed my eyes to the bride, as she walked through the trees towards the water’s edge and my boy. Dressed in a full length white skirt (that hid the practical boots) a sleeveless white lace top and a circle of fresh flowers adorning her hair, she reminded me of a wood nymph. The bride walked towards her husband to be – Alone. That was the moment I could no longer hold back the tears. Her father should have been by her side, not on the other side of the world.

It was a short ceremony and at the end, the celebrant asked the newly married couple to come together and tell each other what they loved most about their partner and one thing they would like to change. The sound wasn’t loud enough for me to hear the answers, probably a good thing, but the laughter from the audience of friends, seated out of my view, signalled their approval.

There was no confetti to litter the glorious landscape. Everyone had been given bubbles to blow in the direction of the happy couple. The group, who were about to celebrate this occasion – big time, then escorted the newly weds through the autumn woodland to the reception at the home of my son and his wife.

The woodland and river setting had more than served its purpose for that day and had been left as it was found – perfect.

Isn’t technology amazing?  It was the best wedding I’ve ever been to. 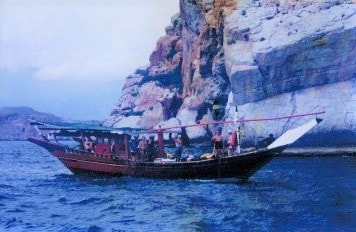