​Lighten our Darkness by Ronald Mackay

“Of course! Ron will pick him up this afternoon.”

I’d been listening with only half an ear to Hannah’s telephone conversation with Conrad, her elder brother, but that I was volunteered for a task came as no surprise. Hannah was adept at deflecting responsibility, if it required of her, time, effort or expense.

“We can have student help on the farm in return for keep and an allowance!” She looked at me triumphantly. “Conrad received an emergency call from Germany. The son of old family friends is spending a work-year in Ontario. He’s unhappy with his working conditions up north. I promised that you would pick the young man up at the coach terminal this afternoon.”

Hanna offered hospitality only if it were to her benefit, so I waited.

“He can walk my girls and feed and socialize the pups.” Recent litters presented by three of Hannah’s ‘girls’ had increased deerhound numbers to 28. A single-minded breeder, she clung on to all pups for as long as possible so that she could select the perfect specimens for herself. Running a pure-bred kennel involved a demanding physical routine, arduous work of the kind that Hannah preferred to delegate. She saw her primary role as managing bloodlines and promoting the reputation of her kennel in speciality shows throughout North America. She lived for admiration and applause, belonging to that clique of breeders who deceive themselves into believing that absolute devotion to their dogs releases them from any further social effort. Unlike love between people, human love for animals can be enjoyed at little cost.


Hans picked me out as his host even before he’d alighted from the long-distance coach. Conrad must have described me well: ‘Fortyish; compact; fit; cordial.’ He struck me as a presentable young man, in his early 20s, who carried his athletic frame well. His eyes, however, seemed to betray a deep, barely suppressed hurt that I put down to his unhappy experience in northern Ontario. Farming up in the Canadian Shield was brutal, back-breaking and unending. Now he was looking directly at me in a hyper-alert sort of way as if searching for the slightest sign of resentment or reproach caused by his sudden descent upon us as a favour to his parents.

My heart went out to him. Most of my life had been spent far from home sometimes accompanied by doubts and always by hard work. I smiled and offered Hans my hand. The injury behind his eyes diminished a fraction as he clasped it.


Hannah had decided that Hans would occupy the tiny, comfortable log cabin erected in the 1820s when the first settler had claimed the land. We lived in the large brick farm-house built six decades later, after the farm had thrived. While I was away in Montreal from Monday to Thursday, he would cater for himself. Hannah merely grazed from the fridge except when I was home to cook. Hans would join us for meals for the remaining three days.


Things went according to plan. My Thursday nights were spent on the sleeper from Montreal. Immediately I arrived home after the 30-minute drive from the railway station, Hans would seek out my company and offer help with the farm work. The hay was already in the barn; the grain had been combined and sold, so the chores were neither urgent nor arduous. We repaired implements, greased and stored them ready for the following spring. There were routine tasks associated with our suckler herd. We kept 20 pure-bred beef-cows. Heifer calves were allowed to suckle until the cows freshened the following year. Automatic feeding systems had to be loaded for the days I was absent, the heated water-bowls checked, and the integrity of gates and fences guaranteed.

To maximise profits, I kept the bull-calves in a separate corral. The best bulls would be sold entire for breeding and the balance castrated, then passed on to a beef-finisher. I’d select the best pure-bred heifers to replace older cows and sell the balance on to other breeders who sought quality breeding stock.


“I am pleased not to be responsible for the cattle!” Hans looked at me, challenging a reaction. He looked straight into my eyes in that sceptical but faintly hurt manner that he had that Sunday weeks before when he’d alighted from the bus.

“I’ve automated as much as I can. The automatic feeding and watering systems I built myself,” I met his eyes. “So, at weekends all I have to do is load the bales for the four days I’m gone. I check new calves, inject them, and keep track of weight gains.”

Hans appeared satisfied at my comfort with his lack of enthusiasm for domestic animals. Hannah appeared satisfied with the long walks he took separately with the various groups of dogs every day. I’d learned not to become too involved in her routines and so I didn’t discuss them with Hans. As if to reward me for my candour and my reserve, he continued:

“I have checked your woodlot when walking the dogs. It needs managing. I can cut out next year’s firewood and remove undesirable species to improve the good lumber. Forest management is what I study in Germany.”

Most 100-acre farms in Ontario had a woodlot left uncut once the 80-or-so acres of land had been cleared for pasture and arable. Our 20-acre woodlot provided firewood for the farmhouse. I had no extra time to manage and harvest lumber for construction and repairs.

“I’d appreciate that! Why don’t we get the chainsaw and check out the woodlot together?”

Pleased that I was sympathetic to his offer, he fell into comfortable step beside me.


As I watched Hans select and fell an unwanted ironwood tree and then begin limbing and cutting it into blocks for the stove, I could see he was in his natural element. He was stronger, more confident and handled the chainsaw more expertly than I. He cut not merely on the downstroke but also on the rise, using the back of the saw. His every movement contributed to accomplishing the job with least effort in the shortest time.


The following Friday I returned from my four days in Montreal and was preparing breakfast when Hans came into our kitchen. He returned my smile. The hurt in his eyes, I was pleased to see, appeared to be fading but he clearly felt the need for human companionship. Hannah seldom initiated conversation. She required little company beyond than that of her dogs, satisfied with their uncritical adoration. I had come to terms with the realisation that the world of this dedicated dog-breeder was satisfied by blood-lines, competition placements and championship points. Compared to humans, dogs were simple, patient, made few demands, and loved unconditionally.

Hans stood by the table as if reporting to a senior officer. Sensing his need, I gave him my full attention.

“I have tidied up 150 square metres of your woodlot.” His words were as precise as his posture.

Knowing that it would please him, I showed surprise and appreciation at such accomplishment. “Then why don’t we go right now and see what you’ve done?”

The loneliness he’d been bearing in his eyes seemed to diminish.


Hans had done a beautiful job. He’d felled ironwood trees and other species suitable for firewood. He’d limbed and cut them, then stacked the blocks to dry. More valuable maple, beech, ash and hickory now enjoyed space, air and sunlight to grow unhindered.

Hans watched me intently. It was as if he was searching for the tiniest hint of irony or implied criticism. I thanked him wholeheartedly and read the immediate appreciation in his face.


Fall turned to winter. Hans reported on his progress in the woodlot every Friday morning. Together, after breakfast, we would make our inspection tour. He would listen with the utmost attention to every inflection of my voice as I expressed my approval.

I put this neediness down to his bad initial experience in northern Ontario and to Hannah’s interest only in his following her instructions with the dogs and his four days of enforced solitude.


In direct proportion to my growing appreciation of Hans and satisfaction in seeing the hurt in his eyes ebb, Hannah began to nurture a growing hostility towards him. Her resentment arose, I told myself, at Hans obvious ease in my company at weekends and my expression of appreciation for his work. She scorned my weekly search for German recipes when we ate together. I cooked gulasch, egg-noodles and rouladen not only to please Hans but also for Hanna’s mother and brother who remembered their earlier life in the Sudetenland. They visited regularly to replenish their meat supplies from our freezers. However, cooking for Hans gave me the greater pleasure. There was something vulnerable about him that begged for compassion.


One Saturday evening, Hannah and I returned home from a dinner party. Hans had been invited but, as always, had declined to accompany us. As we drove up our farm lane, he was standing alone on the porch swinging his arms for warmth. Though it was spring, the chill demanded a coat but he wore none. Hannah barely nodded to him as she passed inside, eager for her dogs’ joy.

Recently, I’d noticed that the injury in Hans' eyes had been returning. Now, as I stood with him on the porch, the hurt was as obvious as it had been the day I had welcomed him off the coach.

“Why not put a coat on when you come out to smoke, Hans?” I said, concerned.

“I told you that I have stopped smoking.” He narrowed his narrow-eyes as if daring me to contradict him.

It was clear he needed fellowship, so I stayed.

“Then why stand out in the cold?”

He swung his arms to stimulate circulation. “I’ve been here on the porch watching since you left three hours ago.”

He made no move to enter. We stood in silence. He was struggling with a need I was unable to comprehend and he seemed incapable of expressing.

He unclasped one arm and gestured into the distance. “They are watching.”

I looked towards the neighbouring farm a kilometre away sheltered by two ancient maples.

“If I keep lookout, they won’t come.”

Although never in my life had I any first-hand experience of mental illness, now I saw Hans clearly for who he was – a young man terribly, inexplicably injured.

Involuntarily, my heart went out to him. His odd demeanour since that first afternoon now made sense. It was an appeal for refuge, for sanctuary from unseen demons; the essential meaning of the simple evening prayer: ‘Defend us from all perils and dangers of this night.’

I looked directly at him keeping all judgement out of my face and voice.

“Hans, have you ever been to hospital?”

His eyes responded to the deeper question. In that moment I wasn’t a 40-something, old-fashioned, Scottish-born university professor, part-time farmer and Hans’ accidental employer. He wasn’t a German forestry student who had been banished by proud parents to Canada for a year’s work in the backwoods to erase the shame of having failed a university examination. We were two men of simple goodwill seeking aid against night’s dark perils and dangers.

“Yes.” His voice pleaded for understanding.

“We can go together to hospital now if you want. I will take you.”

“Come!” I embraced his shivering shoulder and sat him in the still-warm car.

All the way into the town, I drove slowly using only my left hand. He clung to my right.


Together, we parked in Emergency. The compassionate triage nurse knew exactly what to do. 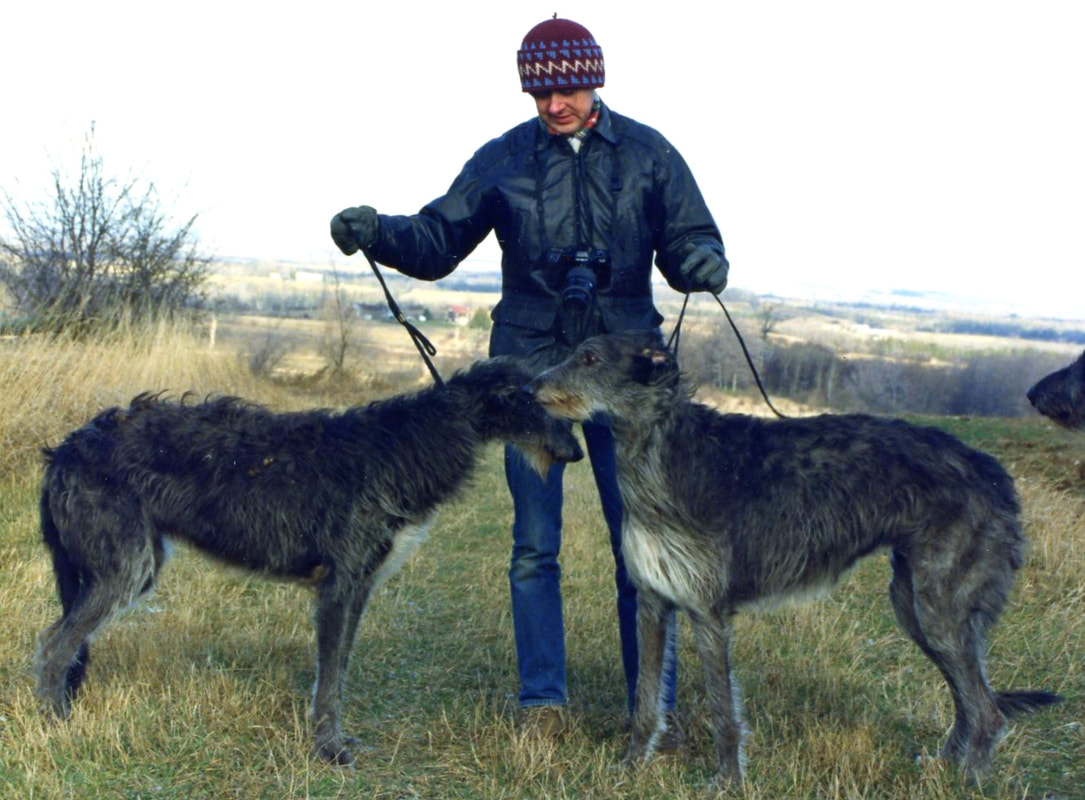 A single-minded dog-breeder with the loves of her life.