WHAT I DID IN THE HOLIDAYS by Adrian Sturrock

predictably, altitude related, increasing in risk from the 3,000 metre point. Kilimanjaro is just short of 6,000 metres, which makes at least half of the mountain potentially deadly (if you factor out the more feisty animals that live in the rain forest, at its base).

I’d been lucky so far. Having initially proven myself beyond doubt to be the least fit of the group, I had been slowly moving up the league table – that is, the league table that existed only in my head and which comprised of a list of my fellow climbers placed in order of their current likelihood to reach the summit. My own mobility within this table was mostly based on the number of group members who had, to date, shown signs of altitude-related symptoms. Whenever I heard a person vomit, or observed someone walking with the customary stagger of a drunk, I quietly and metaphorically patted myself on the back and congratulated myself on how well I was doing. They say that taking part in extreme activities teaches us much about ourselves. Perhaps I should, in all conscience, remove ‘team player’ from my list of CV attributes when I get home.

For no logical reason, I hadn’t so far experienced any hint of altitude problems. We were now on Day 5 and, at 4,600 metres, were well into the altitude zone in which the oxygen-in-air ratio is half that of Milton Keynes. My apparent immunity had helped level the field a little. I was gradually growing stronger as one climbing day led into the next. Though each day was little more for me than an amalgam of pain and exhaustion punctuated by an occasional pretty view, my confidence was being discreetly massaged by the steady increase in casualties around me. I was careful not to communicate this out loud, however. I’m a narcissist, not an idiot!

On the other hand: ‘Oh my god, I am actually quite a horrible person,’ I thought to myself, as I suddenly became aware of my own thinking. To be fair, however, I had travelled half way across the planet to reach this summit that seemed to be retreating from me with every footstep I took towards it. I had not come here to make friends; painful endurance and civility were not things I was likely to be able to pull off simultaneously. Best not to risk trying. I silently relegated these people around me to mere bit parts in my own Truman Show, markers by which to measure my success or failure. Out here, it really was a dog-eat-dog world – if the mosquitoes didn’t get you first. ​
​
--------------------
​
and large enough to hold only perhaps a dozen modest tents. This area is surrounded with – and therefore protected from the worst of the elements by – a debris zone of large lava boulders, a disconcerting reminder that Kilimanjaro is not merely a mountain but a dormant volcano – as opposed to a properly dead one, which is what I would have preferred.

The only other fixture in the camp was a small wooden toilet hut which had been erected right at the mountain’s edge, beyond which was, in the words of John Lennon, only sky. As I squatted in the tiny cubicle, wondering how much longer I could hold my breath from the horrendous smell of the dug-out latrine (my guide demanded we use the French word for shit house) before I might finally lose consciousness, I wondered whether the crap was stored or allowed to freefall its way down the mountain to a different post code. I was concerned, but not enough to ask questions.

The idea was that we would all retire to our tents around 7pm, straight after our last meal of the day, in order to get enough sleep for the final ascent which was due to start at midnight. The overall objective was to reach Uhuru Peak, the highest point on the mountain – the highest point on the African continent – at the point of sunrise. This sounded like a nice idea, quite romantic, really. So, I planned accordingly:

It occurred to me that if we were looking to rise at midnight into the full darkness, having my gear already strategically placed would be the best idea. I also knew that this final section of our journey was going to be the coldest and most challenging and so all of my clothing layers would be needed. Rather than mess around with trying to find these items in the darkness, better to put them on now, while it was still light. ‘Not just a hat rack,’ I thought to myself, pointing to my head.

The temperature outside the tent was already quickly dropping as the sun began to lose itself behind the rocks. Luckily, I had my four-season sleeping bag – and all of my clothes – to keep me warm. I slipped on my three layers of leg wear, four upper body layers, and my three pairs of socks, before wrapping my gloves, balaclava, and head torch into my hat and sliding them into my sleeping bag with me. I placed my rucksack next to me and quickly fell asleep.

It was a difficult few hours. Sleep was deep and filled with quickly shifting images. Voices without faces shouted simultaneously from behind and in front of me; so many voices that I couldn’t understand a word – angry and gentle and urgent. And there were pains in my legs, severe and stabbing, as everything became pressing and claustrophobic.
​
I woke in a fever and sat upright, but the voices were still there, insistent, determined and, to be honest, quite scary. Had I woken too quickly and ripped these beings out of my dreams with me? I looked around, wide eyed, anxiously trying to zone in on something real, some form of reality, but the blackness around me offered nothing. Filled with panic, I crawled to the tent’s entrance and frantically pulled on the plastic zipper, inviting a large swirl of frosted wind into the tent. I stood up tall and dragged on a hungry lungful of cold air, shocking myself into pulling free from these dreams and these voices.

Almost immediately, my sanity began to catch up with me, and the noises in my head eddied away into the dark. I rubbed off the cramps in my legs and reached for my flask. The only angry voice I was now aware of was the muffled one coming from the sleeping bag next to mine.

‘What the hell are you doing? Close the flap!’ it shouted.

It was Alesandro, my tent buddy.

‘Sorry,’ I said, reclosing the entrance, ‘I think I had a bad dream.’

‘A bad dream? You were shouting at me to make sure I double-sided while photocopying. Call that a bad … What kind of nightmares do you English have?’

He turned on his head torch and shone it over me. ‘What the … Why are you wearing so many clothes? No wonder you ache, you’re overheating.’ Having completed this efficient diagnosis of me, he switched off his torch and rolled over to go back to sleep. I think I might have heard the word ‘idiot’ rise out of his sleeping bag as his head disappeared into it, though I couldn’t be certain.

​We didn’t talk of this again.

Later, at midnight, stepping out of the tent and feeling a little saner, my attention was drawn to the surreal beauty of what resembled a candlelit procession stretching up into heaven in front of me. There was no distinguishing shade between the blackness of the mountain and the blackness of the sky as our guide directed us towards the line of glittering lamplight that was slowly snaking its way up the arbitrarily chosen pathway. Getting into single file, I quickly joined rhythm with the set of feet in front of me and became part of the procession, my head torch illuminating only the backs of a pair of boots that were to be both my metronome and my compass for the next six or so hours.

​There are no memories to be made from an activity like this. The mind cannot make memories without pictures. I didn’t know this until now. And without pictures, time itself ceases to exist. Six hours of walking in the darkness may as well be six days, six lifetimes. There are no thoughts to be had, one either marches or gets left behind. I kept going. I had no real image in my head of what success would look like if I reached the summit, but I did understand what humiliation and defeat would feel like if I didn’t. My wife, I realised, had put far too much emphasis on my lack of preparation for this project; all I had really needed to bring with me was my over-inflated sense of pride and an equally large fear of having it crushed. Luckily, I’d remembered to pack both of these.

Stubbornness, blind and empty, led me on through the pain and the tiredness and the monotony. One foot in front of the other, in front of the other. And it’s funny what one’s mind does to compensate. Over the next period of time, it played me a montage of things that I had long forgotten: of early schooldays, of the dresses my mother wore in the 60s. It retaught me that the finger prints of the koala are so indistinguishable from humans that they have on occasion been confused at crime scenes. All in all, my mind was being quickly reduced to how it becomes during staff briefings at work. I guess stimuli inertia is the same wherever you go.

It wasn’t long before the blizzard started to kick in harder, blasting crystallised ice horizontally across my body, finding any gap or crevice in my outer layers to deposit itself. The only area of skin that was still open to the elements was where the small slit in my balaclava exposed the bridge of my nose and the tips of my cheeks. Soon, this area of my face was past numb, as I experienced the full intimacy of the elements pressing against me and digging into my right cheekbone like a knife, relieving me of any awareness of pain elsewhere on my body.

I looked upwards to see if the blackness had shifted at all, to give me at least a clue as to whether the dawn was finally coming. Nothing, only darkness – the paintbrush dipped in the same shade for the mountain and the sky. ‘Time must be passing,’ I thought. ‘It must be.’ In the meantime, all I could hear beyond the squawl of the wind was the emptiness of the broken clock. 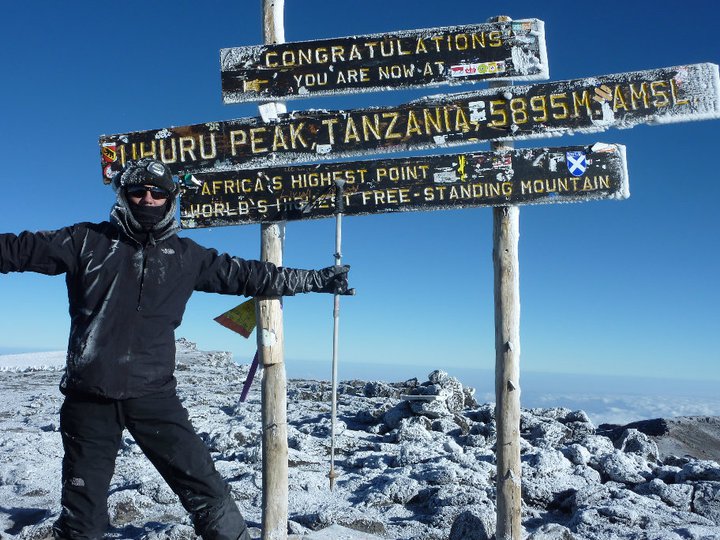