Giving Grubs A Go in Mexico City by Emma Yardley

​MEXICO CITY – The best way to discover a new city is usually by experiencing its unique sights and sounds—but sometimes, you can only truly discover a place’s true character through your taste buds. Mexico City is inviting you over for dinner… and you’d better have an appetite.

“Mexican cuisine is one of the ones that just is full of flavour and made with soul,” explains Chef Justin Ermini of Anatol, a farm-to-table restaurant at the luxury hotel Las Alcobas (Masaryk 390). “The fine dining aspect works, but the true food is on the street and in the homes.”

Ermini, who is a originally from Connecticut, spent a year traveling and tasting his way around the country, sourcing ingredients and familiarizing himself with the growing seasons in order to get the best produce at the perfect times. Squash blossoms are blooming at the moment, so that’s what is on his menu.

“This is a dish designed around the American palette but using Mexican ingredients,” explains Ermini, describing how each organic blossom is stuffed with sage as well as sheep, cow and goat’s milk, and flavoured with Cascarillo honey gathered from the pollen of a single flower in Campeche, Mexico. “It is a perfect example of the merge between Mexico and the U.S.”

Built at 2,250 metres above sea level on top of awe-inspiring Aztec ruins and the remnants of cobblestoned colonial infrastructure, Mexico City has been the central place of power in the region for over 700 years. This gives the city, home to 21.2 million people, a unique position when it comes to national and international influences in the food scene—folks come to the mountain, not the other way around.

“You can find food from all over Mexico in one place,” says Margarita Carrillo Arronte, chef and author of Mexico: The Cookbook. “You can find fusion between ingredients and techniques that are giving [the area] a unique style of food, especially among the young chefs.”

Among the restaurants masterfully mixing the traditional with the global are Paxia (Av. De La Paz 47), in the idyllic southern district of San Angel, and Azul Condesa (Calle Nuevo León 68) in the trendy Condesa neighbourhood, the second of three establishments opened by Chef Ricardo Muñoz Zurita.

“Traditional food has changed,” says Carrillo Arronte. “Chefs [are] trying to serve it in a more modern way.”

Before you can excel at fine-dining fusion, however, you need to have solid fundamentals. And here in Mexico’s highlands, no dish is more home-grown than lamb “barbacoa”, an open fire, mesquite-wood barbecue served with hot corn tortillas, chilli salsa and freshly squeezed lime. Pulling together the three flavour pillars of Mexican cuisine, smoky, spicy and sour, ordering a feast at El Hidalguense (Campeche 155) is going to give your mouth a crash course in home-cooked “street food” cuisine.

“Mexico City is not only a tourist or historical destination, but also a gastronomical destination. And street food is part of the experience,” says Chef Edgar Kano, executive chef at the Four Seasons Mexico and friend of El Hidalguense owner Moisés Rodríguez. “It displays its true flavours and aromas, which is the essence of gastronomy.”

Rodríguez raises his own lamb on his ranch in Tulancingo, a town north east of Mexico City in the state of Hidalgo.

“He is passionate about the barbacoa, so he ensured the lamb is consistent in age and size,” explains Kano, who acts as host and menu translator during a finger-licking lunch at the restaurant. “Once butchered and cleaned, they place the lamb in huge cages wrapped with maguey leaves.”

Just as the heart of the maguey plant (a type of agave) gives mescal and tequila their distinctive flavours, the roasted leaves of the same plant deposit a smoky register into the self-marinating meat.

“They are cooked overnight in a [handmade underground] clay oven…the bricks and lava rocks built solid inner walls that prevent heat from escaping,” continues Kano. “And every morning they drive the barbacoa from Tulancingo.”

But it’s not only the heart and leaves of the maguey plant that you’ll find on a traditional Mexican table—the larva of the ants that crawl on them (escamoles), the white worms that make their home on the leaves (meocuiles) and the red ones that live in the roots (chinicuiles) also find their way onto the menu.

If you’re feeling brave (especially after a shot of artisanal mescal), you can try one of these high-protein, pre-Columbian dishes, which are commonly sautéed with butter, epazote and serrano chilli. But if bugs don’t tickle your fancy, never fear—with the advent of Mexican fusion food, you’re sure to find something to please your palette, and give you a distinctive taste of today’s Mexico City.

Food for Thought: Known as the “floating gardens”, take an intimate, guided tour of the food-producing canal district and UNESCO site, Xochimilco, offered by De la Chinampa, a company with a mission to promote the area’s high-quality, chemical-free produce. For a once-in-a-lifetime experience, cruise through a maze of around 5,000 chinampas, the woven tree-root-and-mud rafts fields originally created by Aztecs on Lake Xochimilco, on brightly painted long boats called “trajineras” while enjoying a meal made entirely out of the organic food found on these floating farms.

Weather Tip: While Mexico City is smack-dab in the middle of the tropics, due to its high altitude the climate is rather cool. The ring of mountains and volcanoes surrounding the city “catch” clouds—even if it’s not the rainy season, it’ll probably rain at some point during your visit so pack appropriately. 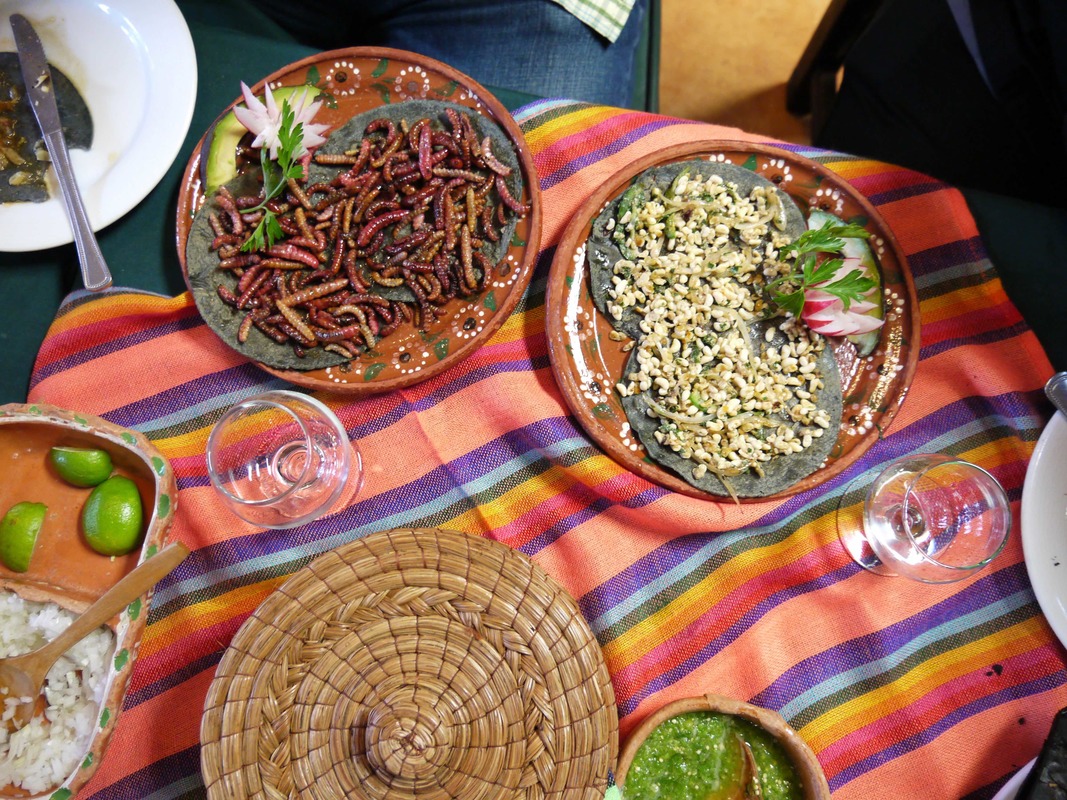