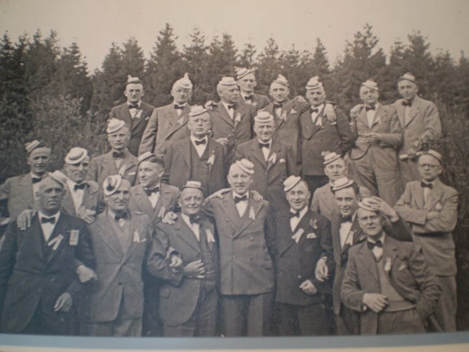 ​They were jolly old gentlemen on an excursion in the fields. Decked in three-piece suits complete with pocket squares, dark bow ties and tiny jaunty hats. Comical. Arms linked, shoulder to shoulder they stood.

Members of the Flensburg Gestapo, the caption read. It was the kind of thing that made you look twice.

I was on the last leg of my trip to Berlin and had stopped at the Topography of Terrors – a photo museum and place of remembrance on Niederkirchnerstrasse, formerly Prinz-Albrecht-Strasse. Site of the Gestapo and SS headquarters during the Nazi regime.

Outside, the bare trees, steely gravel and bleak buildings were a precursor. Inside, the monochrome photographs immortalized the worst.

In one corner, I stumbled upon the image of Orthodox Jews herded through the city center, forced to carry the black-red-gold flag of the democratic republic.

Elsewhere, my eyes met those of a political opponent publicly humiliated and made to sit on an ox, with a cardboard sign around his neck proclaiming his betrayal of the people.

One installation is just an array of faces -- political prisoners interrogated at the Gestapo HQ in 1933. I looked through their offences. In the line-up were: communists, socialists, social democrats, union activists, authors, journalists, artists, musicians, clergy and liberals.

The images are seared into memory.

At 21, Berlin was my first solo travel experience and my first time venturing beyond Asia. I came for the cityscapes I saw on a Google Image search. For the currywurst, glühwein and apfelstrudel. I was not disappointed.

But I also found something grittier. I found the bright rebellion of Berlin’s graffitti wars.

I found the badly pitted section of the Berlin Wall left over in Niederkirchnerstrasse, thanks to the Mauerspechte or Wall Woodpeckers – people who hacked away with chisels and hammers for souvenirs they could sell.

Jonny, the tour guide, told me about it. He also spoke of a family who managed to construct a hot air balloon out of bedsheets and make it across the Death Strip, from East to West Germany.

I took it all in of course.

I found the intersection of both old and new in one place. Near the busy public square Potsdamer Platz, were people taking photos against graffitied sections of the Berlin wall.

Around the corner, I chanced upon a poster of a (then) new cinematic release – Ben Stiller’s ‘Little Fockers’. Or as the Deutsch equivalent read -- ‘Mein Frau under Kinder und ich’.

My wife, our kids and I.

Not far away, north of Unter den Linden boulevard – known for its lush lime trees (except you can’t really tell in November!) – was the Neue Wache, a war memorial since 1931. The sculpture, Mother with Dead son, is exposed to the elements by an oculus. They say, when it rains, it looks like the statue is crying. This is what I remember.

In the same borough of Mitte loomed the tents and Eurodance tumult of Berlin Fashion Week, across the street from Humboldt University, home to some of the greatest German minds from Einstein to Karl Marx.

In 1933, some 20,000 books from the Humboldt University library were classified as ‘un-German’ and burned by Nazi paramilitary goons. Much later, they erected a memorial to the book-burning. A glass panel embedded in the cobbled street, looking into an eerie white underground room with empty shelf spaces for the 20,000 burned books.

A plaque nearby reads: "That was only a prelude; where they burn books, they ultimately burn people". The chilling words of Heinrich Heine in 1820, over a century before they eventually came to pass.

To be here is to bear witness.