MOM - SOME THOUGHTS AND MEMORIES by Syd Blackwell

At the age of twenty-four years, one hundred thirty-five days, Kay Blackwell became a mother for the first time.  She would give birth to three more boys in the next seven years, and a daughter fifteen years later.   My own recollections of my mother began about four years later.

I was a sickly child.  My most serious ailment was rheumatic fever that occurred during my fourth year.  My earliest recollections of my mother were of her caring for me during these ailments that plagued my pre-school years.   Also, at this time I began piano lessons from elderly Mrs. Langdale who lived behind our home.  Mom had been advised that I should not participate in active sports because of a heart murmur from the rheumatic fever, and piano lessons became the alternative.  I continued for about ten years, but was never really any good.  I also lived an active, robust, adventurous 1950s´ boy life despite the heart murmur.

Before my teen years, I did not think about my mother very much, but she was the person that was always there, doing everything.  In the early years when we heated and cooked with coal and wood, she was up before six, to get the house heated (in colder seasons), dad breakfast and off to work, and then kids up.   Her days were spent in cleaning, shopping, preparing, cooking, washing, ironing, mending, sewing, gardening, budgeting, and so much more.   She was always there.  She was the first person we saw each morning and usually the last we saw each night.   We all took her work for granted.  We helped only occasionally and then usually whined and complained throughout.

By the time I had turned into a teenager, I was really starting to understand and appreciate how much my mother did.  I also observed her through her last pregnancy, a most interesting life experience for a teenage boy.  I had a great deal of friction throughout my teen years with my father.  My mother became my guide and counsel.  Even some of my friends talked to her about their problems.  She also became proficient at giving her sons haircuts.  Some friends even came for one too.

I left home for university in September 1965.  I would return for employment four of the next five summers, but I resided in Victoria.  Unlike most of my family, I would never again live in the Kootenays.  It would be 29 years before I got close.  I only knew of the intervening years through sporadic messages and infrequent visits.   My mother was not often a part of my active life.  It would be years more before I understood that she was always with me.

In late 2006, Gundy and I visited Uruguay and quickly made a decision to retire there.  Gundy sold her business and left in March 2007, but I had difficulty selling my business.  I was excited when mine finally sold in September.   I drove to Rossland for a visit with my mother.  I left two days later.

Summer lingered a little longer
than usual this year
By the last day of September
autumn golds, oranges and reds
had not yet captured half
of summer’s deciduous greens
A steady rain fell as I waved farewell
to my mother in the upstairs window
now knowing when I might see her again
or what condition she might be in then
or even if there will be a when
I dried my misted eyes
and began the rise
up the highway to tomorrow
quickly reaching fog
before rain turned to snow
summer letting go
me getting to go

For most of the next year and a half, our communication was by telephone and occasionally by mail.  I received frequent updates from my sister, Nancy.  I heard of her continuing physical deterioration and the signs of mental problems.  By the end of 2008, it was becoming clear that her time in her own house was nearing an end.  She already had considerable assistance and the coming year would see that escalate.   On Christmas Eve, Nancy arranged a Skype call where mom could be present.  Our conversation was difficult.  I felt strongly that I needed to send a letter to my mother, while she could still understand.  I could see that time was slipping away.

I need to write to you. I’ve known this for some time; particularly since I spoke to you on the phone on Christmas Eve.

However, I want first to talk to you about the card that Nancy chose for you to send to me on my birthday. I know there was divine guidance in the choice of that card. I have never read or seen a card like that and know that it was where it was in the store so that Nancy would find it for you so you could say what you really wanted to say. I’m sure you don’t remember all of it, but here is what it said:

"Dear Son,
There are lots of things I meant to tell you before you grew up and journeyed out into the world. I suppose by now you’ve learned some of them for yourself. But there are things you need to know and words you’ll only hear from someone who’s known you from the start. Someone who heard your first heartbeat, who held you and looked into your eyes with amazement. Someone who relives the wonder and special meaning of this day every year. I want you to know that you’re as deeply loved now as you were in my heart back then. And wherever life takes you, that love will forever go with you."

I began my journey out into the world such a long time ago. Your home was my home only until I was 18; that was 44 years ago. I have always been a traveller. We have spent a long time at a distance. However, I have never doubted or never stopped feeling that you loved me and that I loved you.

Now that the physical distance is greater than it has ever been, it has become stressful to you. However, physical distance is not very important. Even when I was a lot closer I didn’t see you very often. There were times in those years when I didn’t see you for more than a year. I know it’s now been longer than that since we last saw each other. I also know that you are concerned about when we will see each other.

However, I have become a spiritual person. I am sure that I always was. I am sure we all are. I just didn’t know it when I was younger. I have had more time, since I stopped working, I have done more thinking about my spirituality. We are all spirits having a human experience; not humans having a spiritual experience. We are forever connected, you and I, and we have always been so. We will continue to be so. Nothing can prevent that. No distances change that. Whether we are here in this human world or when we pass again into the spiritual world we will still be connected. We are spirits together.

I have always known this and felt this. I have been awakened to my spirituality, but I have always known about our love. The difference is now I can see and understand and talk about it as I never could when I was younger.  I know that the distance is only a human distance and that the spiritual distance is non-existent. It is the only distance that really counts.  I cried when I left Rossland to move to South America because I too focused on the great physical distances and the uncertainty of the future. But, the future is always uncertain in human terms. It is only certain in spiritual terms.

So, for this time in our humanity we only talk on the telephone. It is a human way of communicating a lot of things that generally are not so important. It is also a way of reconfirming in a human way our love - a love that is universal, eternal and uncompromised by the simplicity of our humanity.

FURTHER THOUGHTS FROM AN EVOLVING MIND

​By October, they were worse.

PHONE CONVERSATION WITH MY MOTHER

We breakfasted with Nancy and Don on excellent breads and jams and bowls of fruit and thick yogurt.  Wonderful!

Around noon, we will visit our mother.  Nancy sees her all the time; Tom also visits her regularly.  I last saw her at the end of September 2007.  I never thought I would see her again.  She is now 91, wheelchair-bound, incontinent, unable to self-feed and fully into Alzheimer’s.   I had no expectations that she would know me in any way.

We found my mother at one of the tables for residents who cannot feed themselves.  Nancy visits once or twice a week, mostly at lunch so she can feed mom.  We appeared and she recognized Nancy.  Don, Gundy and I stood back.  She does not know Nancy as her daughter, but as someone who comes to visit her often.

Suddenly, she focused on me.  Everyone else also noticed this.  She stared intently at me and then smiled.  She had recognized me in a way that she had not done with other family members who had visited.  She did not say anything but there was no question that for a few moments there had been recognition.

Soon the food appeared and Nancy fed mom.    From time to time, she looked at me briefly.  She also looked at Gundy a few times.  After her meal, I leaned in close to her head and she spoke to me in a low, slow voice.

“I haven´t seen you in a very long time.”

Then the moment was gone.  She was somewhere else.   However, I was fighting back tears.  The initial recognition, the fleeting glances, and this amazing statement had never happened with anyone else since she slipped down the Alzheimer slope.

There would be no more moments. 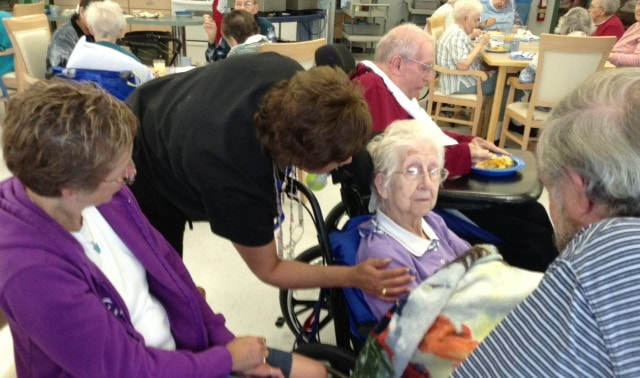 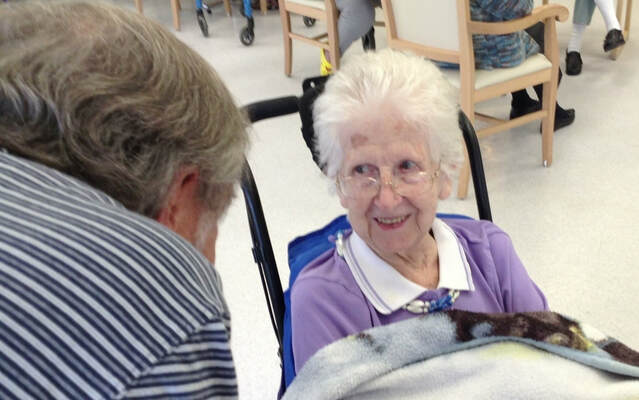