​Canberra, In A Roundabout Way by Mike Cavanagh

My family headed off in the autumn school holidays of 1963 in Dad’s 1959 black Chrysler Royal. The car was my father’s pride and joy; chrome bumpers, full body-length chrome side stripes, white rear wing tips, white-walled tyres and push button automatic transmission. She (of course a she) was such a smooth and classy ride we dubbed her ‘Black Beauty’. We were on a three day jaunt to see the nation’s capital, Canberra, and on board with me (ten years old at that time) were my mum and dad (Ray and Lou), and my brother Peter, who was two years older than me. Now, for all those readers who’ve never been to Canberra, a few things need to be explained.

First off, Canberra was founded by and for politicians. All Australians are born with a healthy disrespect for ‘pollies’, and even Australian politicians themselves start out this way, until they are lured to the ‘dark side’ by already fallen ‘darksiders’. To ‘take the micky’ out of politicians is almost a national pastime, and is possibly only matched by bagging out lawyers. On the other hand, teachers, doctors and nurses are sacrosanct; lawyers and politicians only just scramble a half a rung above The All Blacks. Moving on – can’t even talk about them!

Second thing to note: Canberra is a designed city. Designed by an architect whose design was chosen by politicians from amongst many other submitted plans. Now, on paper, and you can see this effect if you view Canberra’s street map in Google maps or similar, the street design for the main centre (‘Civic’) and the southern section (‘Parliamentary Circle’) across a lake looks quite interesting, almost avant garde. In fact it harks back to Plato’s most perfect geometric shape, the sphere, which translated into two dimensions is circles. Lots of circles. Pretty, pretty. Until you get into a car and drive.

Human evolution has well trained the human brain to (i) see, (ii) react and (iii) accomplish, in this order as efficiently as possible. See red fruit? Swing over to red fruit. Grab and eat red fruit. See beautiful cave woman? Walk over to beautiful cave woman. Produce large club and do what comes naturally. I suspect the Neanderthals would have died out much sooner if they’d all been living in Canberra.

So, getting around and through Canberra involves a great deal of going around and around. For anyone who has a follow your nose sense of direction, this is a nightmare. Heading south? Easy, it’s that way… er, it was that way as you watch it swing from ahead to over our left shoulder, then behind you … er why are we now heading north? Oh wait, here it comes again… and goes again…

If at any time you notice you are running out of petrol, oh dear. If you can even glimpse a petrol station driving through Canberra, don’t go there, it’s a mirage. In their wisdom, the kindly fore-fathers (politicians!) decided things as ugly and plebeian as service stations should be kept well out of sight and away from the main roads; don’t want the money wielding tourists thinking Canberra was for the masses. Oh my goodness gracious, no! What’s more, let’s not even draw attention to them by having signs pointing in their direction. Ex-cellent!

So, this being our first visit to Canberra, no surprise that we couldn’t find the Acadia Motel we’d booked into, which was supposedly close in to the Parliamentary Circle, the southern part of the city. After taking half an hour simply to find the bridge and cross over from the north, we were now locked into ‘veer left’ like a dodgem car going round anti-clockwise all its life.

On the way down we’d stopped for a comfort stop before getting to Canberra, which was to our great good fortune as public toilets are about as hard to find as petrol stations. Mum had allowed Pete to get into the front beside Dad while she sat in the back with me, so Dad got Pete to investigate the one small scale street map we had and identify the street the Acadia Motel was on. Some five minutes later, and four complete ‘turn map upside down’ events, Pete said,

“Good work, Peter! OK, everyone, keep looking for ‘Wandsworth Avenue’ and call out as soon as you see it.”

Then a bit later, “No Wandsworth Avenue yet? Anyone?”

Mum, knowing geographical directions were not her strong suit, took to making little commentaries about interesting things we were passing.

“Oh look, there’s the consulate for Brazil! What a lovely flag they have.”

Dad: “Any sign yet, boys?” having accepted that the ‘boys’ were going to be the only ones actually looking.

“Oh look,” Mum continued on her merry daydreaming come-tourist blub, “There’s the German Consulate. Isn’t it strange that it’s so close to the Polish one?”

Her wit was lost on us entirely.

“Oh look, there are birds bathing in the lovely fountain in front of the Acadia Motel. I think they’re lorikeets.” Mum burbled on.

“What’s this street boys, is this the one?”

“No Dad – this is Fraser Avenue.” I replied, puffing my chest out that I’d identified it and told Dad before my brother could. Then,

“What? Mum? What did you just say?” Pete swivelled around in the front and looked at mum.

“Sorry Peter, what did you ask?”

“Mum, did you just say the Acadia Motel?”

We had to drive around for another ten minutes to get back to the driveway. When we went past the fountain we noted that the birds were indeed lorikeets.

My mum might not have been real hot with directions, but she sure knew her birds. 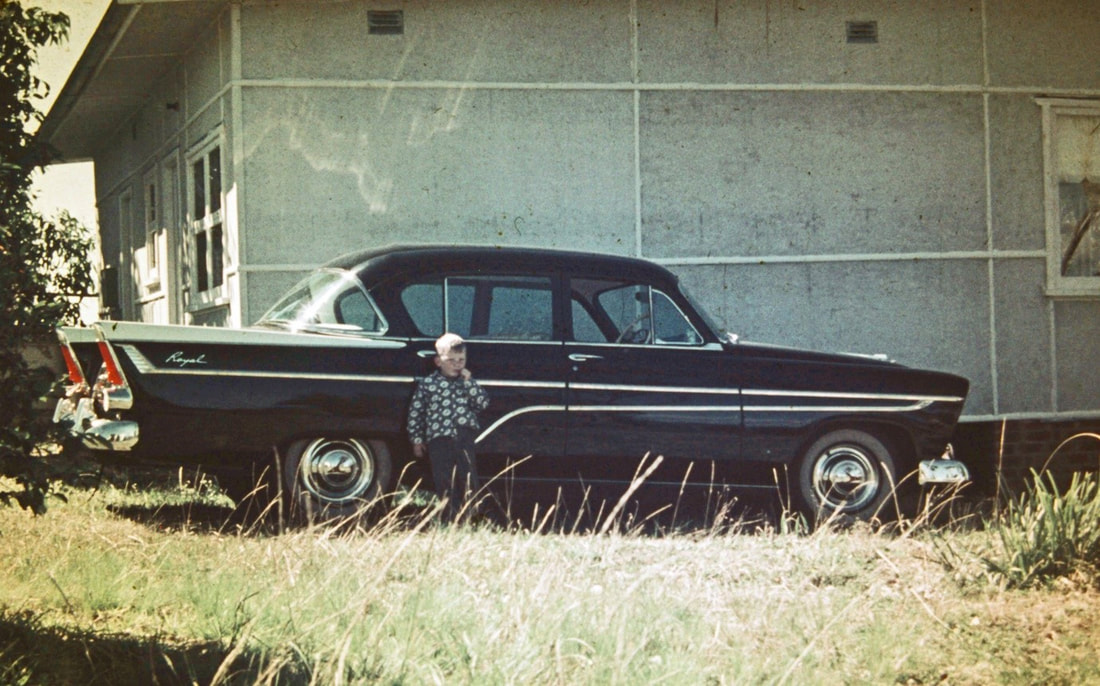