Swaying from side to side the huge catamaran roared and shuddered as it was hit by enormous waves. Rearing up then dropping violently into the trough the Seacat then rose out of the Irish Sea and slammed from side to side into the grey swirling water. Silence reigned momentarily as all I could hear was the throbbing of the engines. Then the thunderous roar filled my ears again as the hull rose to meet the groaning sea and spray rained down on all sides. I wondered how long I would survive if the hull snapped and we were thrown into the water.

Not one to get seasick, or scared by a briny adventure, I was thoroughly enjoying this ferry ride from Port Douglas in the Isle of Man to Liverpool. Nibbling on a packet of chips and devouring nuts I had stored in my backpack after arriving in London 6 weeks earlier, I watched with amusement as white faced passengers and terrified children clung to seats and rails, often sliding across the floor as they attempted to change seat or run for the toilets. Visibility was nil, but we had been informed that the captain was taking a direct route to the English coast. He would then travel down to Liverpool in the lee of the land hoping to avoid the worst of the lashings of this force nine gale.

My neighbour is Manx, and her cousin had kindly invited me to stay on my trip to the island, quite unusual for the reserved and very private locals. I had travelled over on a glassy soft blue sea from Heysham, dozing after a frantic day which began in Manchester. The house I had stayed in was filthy dirty and smelt foul; I had feared for my health.  Waking suddenly when accosted by a group of rugby mad Irishmen who had noticed my Kiwi lapel badge; they were ecstatic to discover I came from Chiefs country, our local rugby team. Their joy turned to abject disappointment when I explained I was probably the one New Zealander they would ever meet who hated rugby.

When the ferry docked I discovered I was expected to be a guest in an hour’s time at the Women’s Institute meeting in Ramsey. Visions of the Calendar Girls and Jerusalem swam before my eyes. Grubby and very hungry, all I had eaten that day was a sandwich snatched between train journeys, I felt uncomfortable. The reticent nature of the Manx was disconcerting, I was an intruder. I had met some of them when they had visited New Zealand but they failed to acknowledge me.  The speaker was enthralling. Almost seven feet tall and weighing about twenty stone, the drum major from the local pipe band regaled us with stories about his uniform and role in various island ceremonies. This included the opening of the Manx parliament at Tynewald. My audibly rumbling tummy was soon calmed with a huge slice of cream filled Victoria sponge, chocolate eclairs and Eccles cakes. I never did get any dinner that night.

Exploring the island next morning was a huge adventure. After a visit to Peel to view the castle and the House of Mannanan, I was starting to absorb the unique history of the Isle. I visited a Celtic roundhouse, saw a Viking long ship, the obnoxious smell of a herring processing plant assailed my senses, and I discovered what it was like to live in a Viking longhouse. After a lunch of Queenies (tiny Manx scallops) we set off for the Calf of Man. Salty thick fog and drizzle swirled around us, we were forced to drive with windows down, lights on, and were constantly on alert for oncoming vehicles. Unsurprisingly we met no one. Arriving at a remote crossroads there were no road signs. Chuckling, I asked if they were still expecting a German invasion and I began to wonder if the Manx had not realised the war was over. Deciding to turn right we crept along the narrow roads as the fog thickened and getting lost became a real possibility. I hoped we would not find ourselves on jagged rocks after driving over a remote cliff or attached by crushed metal to a huge stone wall. I had not planned on a hospital visit or a rest in the morgue. Eventually our destination loomed ahead, the small village of Cregneash where we visited a national folk museum which consists mainly of an original thatched Manx village. The rooms were smoke filled, basic and would have been very cold. A woman dressed in period costume took us to see the blacksmith and introduced me to a very nervous Manx cat.  At the café my large cup of delicious coffee was adorned with the three legged Manx symbol. Travelling back to Ramsey I noticed many of the corners were still sandbagged from the TT races held three weeks previously. As the watery sun silently appeared we visited Tynwald, the site of the oldest continuous parliamentary body in the world. Preparations were being made for Tynwald Day to be held the following month.

Next day it poured incessantly! After a quick stop to view the Laxy wheel, where I got drenched, we carefully avoided the horse tramway in Douglas and dived into a warm inviting café for thick spicy tomato soup and toast. An unexpected text confirmed that despite the storm the ferry was definitely sailing. I left clutching a Women’s Institute calendar.

Several months later while doing some detailed genealogical research on my father’s family, I discovered I had distant relatives on the Isle of Man, Viking blood may run through my Celtic veins. 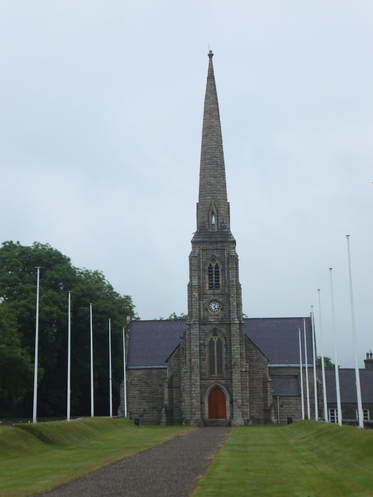