In June of 1958, at the age of 7, when I had been with my new, adopted parents for a month, they took me to an attorney’s office in downtown Portland where my official adoption papers were signed.  I went into the office as Christina Janine Snyder, and came out as Christina Maria Wagner. The middle-name change idea came from my new mother not wanting to be reminded of my old mother’s name. It was okay by me; I didn’t have any particular loyalty to the name, Janine. My feelings about my birth mother were conflicted to say the least, so when Mom said, “You can choose your new middle name,” I grinned, thought a bit and then decided on Maria, the name of an intriguing girl in my Sunday school class.
The next order of business was to figure out how to end my bedwetting problem. Never once did my mother complain about all the missed sleep from getting up to check on me, or all the extra laundry, but enough was enough at last: she commissioned my inventor father to come up with an answer. And he did.
One Saturday, he disappeared for a few hours and when he returned, he was bearing a big bag from the local hardware store. He worked away in my room for a long time and then later, after dinner, called me in. “Okay, Mousie,” he said, “you want to quit wetting the bed, right?”
I nodded vigorously. I sure did. I couldn’t spend the night with any of my friends because nobody wanted to sleep with someone who peed on them.
“Well, I’ve rigged up something that I think will do the trick. Now, here’s how it works.”  He pulled back the comforter, blanket and top sheet of my covers, and then pulled up a corner of the fitted sheet below.  Underneath, I could see an aluminum window screen with a wire that ran over to my nightstand, which was connected to a 9-volt battery. “Now, don’t be afraid,” he said, and then took a little cup of water and poured a small amount on the sheet.  As soon as the water hit the screen, the alarm sounded, “B-Z-Z-Z-Z-Z!”
I yelped, jumped a foot and ducked behind him to safety.  It sounded like a swarm of demon wasps were loose in my room
Dad laughed and pulled me around front to hug me. “It sounds scary but it has to be loud enough to wake you up. And don’t worry, it can’t hurt you. See?” he said, and laid his hand on the sheet. “No shock, just noise!”
I swallowed, reached out a trembling hand and touched a finger to the edge of the screen, ready to pull back at the slightest twinge; I knew what electricity felt like; more than once I had stumbled against the hotwire fences on the farm. To my relief, only my ears were being assaulted.
Dad shut it off and said, “We’ll try it out tonight, okay?”
I sucked in a brave breath and nodded.
It was around 11pm when I turned over in my sleep and my bladder began to let go….
B-Z-Z-Z-Z-Z!
I flew out of bed, squealing like a scalded cat!
Mom and Dad came running, Dad gathered me up in his arms, wet jammies and all, and comforted me. “It’s okay, Mousie-girl. It’s just the alarm, remember?”
Mom inspected the bed and turned to me with a big smile. “Look! It’s hardly wet! It worked!
My heart was racing like a hyperactive hummingbird’s, but I grinned; there was light at the end of my bedwetting tunnel.
It took a total of 4 nights, 4 more heart attacks, and more than likely some minor psychological damage, but in the end, I was free!  The 5th night I woke on my own, got up to pee, and then went back to bed.
The next morning I was ecstatic. “Yippee!” I whooped. “Slumber parties, here I come!”
Today, bedwetting alarm systems are all over the internet, some offer up to 33 different combinations of programmable voice, melodies or sounds no less.  Instead of that annoying buzzer I had, kids can be jerked out of sleep by their scary great-uncle Harry’s voice yelling, “NO PEEING IN THE BED!”
I have no idea who holds the patent on this idea; it’s possible someone before my father came up with a similar device, but as far as I’m concerned, my father was the inventor.

I never learned how my natural father came to be in the driveway that day.
I don’t know if my parents felt sorry for him despite the conditions of the adoption contract, and they decided to let him come and say his final goodbyes. Or if he showed up in direct defiance of the agreement he had signed, hoping the bicycle would be suitable justification.
Then again, maybe they allowed it, but only because it was important for them to observe my reaction upon seeing him again, important to know how strong the bond I had with my father was, before allowing their hearts to become hopelessly bound to me.
Whatever the reason, I made a choice that day. And it would be many years before I would ever look back.
My parent’s had been planning to surprise me with a bicycle on Christmas, but the day following my daddy’s visit, a brand new Schwinn appeared in our garage.
I never asked where the old one went. 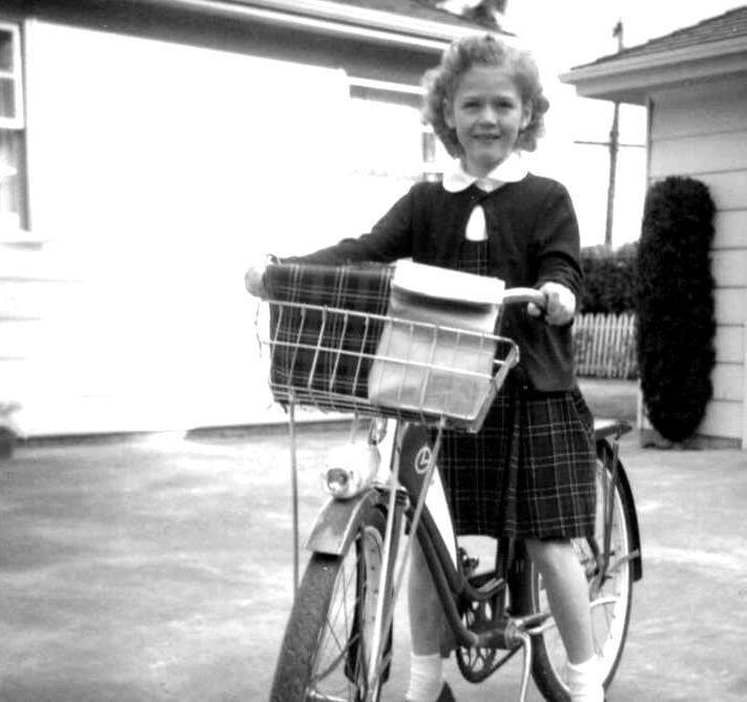