​Confessions of an Accidental Wino - Episode 3 - by Ronald Mackay

​​“It’s urgent, Ron! Send me a white wine as soon as possible.” David Henderson, our Edinburgh wine merchant through whom our most consistent sales were being made, was insistent. “CALEDONIA as a brand is an eye-catcher. You have a first-class red. But a single wine is not enough for long-term success. When I place my Christmas order it will be on one condition.” He paused and then announced very clearly over the phone: “You must provide me with a first-rate white as well as your Cabernet Sauvignon.”

Having issued his ultimatum, David hung up. My heart was pounding. We had only a single wine, made from our own Cabernet Sauvignon grapes. What to do?

“David will feature our CALEDONIA brand over Christmas and the New Year.”

“His order is conditional. He must have a white as good as our red. We’ve no white!”

“Damian promised to help!” Viviana was the pragmatist; I the worrier.

At dinner with Damian and Elba, we explained our problem.

“Can we buy, ethically, bulk white wine from a winery, then bottle and sell it under our label?”

“Of course! In any year, a winery may produce too much or too little for their market. Too little, they buy extra from another winery. Too much, they sell their surplus to another vintner. Provided the quality meets their standards.”

We were one step closer. Again, Damian was showing his value as friend and mentor.

“We need a thousand litres of a good white for Christmas sales.”

Damian shook his head sadly. “Wineries here in San Rafael are short of white. Frost damage in the vineyards.”

‘Typical.’ I thought. ‘A solution materializes, then evaporates.’

“But!” Damian was hopeful. “Martinelli may still have some. Tomorrow, we’ll visit his winery. He owes me.”

Damian could, it seemed, not only answer our novice questions, but also call-in favours. Amassing favours was how business was conducted here. Sadly, Viviana and I were too new to be owed any.

Martinelli was proud of his small winery. It had barely changed in appearance or equipment since his grandfather built it after leaving Italy in 1901. The adobe had withstood a century of baking summers, cold winters, and destructive hailstorms. Inside, it was cool and smelled of the fermentation within enormous oak barrels each as large as a small house, and the mountain-fresh melt-water from the Andes constantly used to flush the concrete floors.

Martinelli’s smile widened when Damian explained our need. “I have the white wine you need!” His certainty made me cautious. I’d learned that when an Argentine businessman expresses certainty, there may just be a hidden catch. ‘I must be on my toes!’

“My Semillon. Exceptional!” Martinelli drew wine into three glasses. More innovative wineries had switched to concrete vats or stainless-steel tanks and moved the great barrels into the vineyard to provide novel overnight accommodation for tourists from Buenos Aires.

I examined my glass. An attractive, clear straw-like colour. Good!

I smelled lemons, apples, and ripe pears. My spirits rose.

I swallowed, paused. No lingering aftertaste, just a clean palate. My spirits fell.

Wines are judged on appearance, nose, and palate, and aftertaste. Martinelli’s Semillon was adequate on the first, acceptable on the second but lacking on the third. I hesitated. ‘Beggars can’t be choosers. This might just serve to get us out of our immediate difficulty.’

Martinelli saw the growing acceptance in my eyes.

“Naturally, you’ll have to take all twenty-five hundred litres.” He pushed his advantage.

“You produce Semillon every year?” We needed a regular supply.

“That’s the last from my Semillon vines. I replaced them with Torrontés.”

As I’d discovered since becoming an accidental wino, every apparent solution came with a sharp sting in the tail! First, we couldn’t sell twenty-five hundred litres. If we bottled that much, we’d be paying high storage fees in the corner of a warehouse we rented in England. I knew enough to appreciate that stored wine earns nothing but costs much. Second, CALEDONIA had a reputation to keep up. Lose that and we would lose buyers like David Henderson who was keen to support us.

Martinelli nodded encouragingly. I realised now why he insisted I take all twenty-five hundred litres. He wanted the last of his Semillon off his hands. I looked to Damian for help.

“Good appearance,” Damian held his glass up to the light. “Strong nose.” Playing for time. “Adequate flavour.” He swilled and swallowed. “Maybe a little short on aftertaste?”

He refilled his own glass and sipped, his face a parody of utter bliss. He swallowed, closing his eyes in fake extasy. Then he stared fiercely at me as if to force the sale.

“A good wine. Alas, it won’t suit my market,” Damian had given me the opening.

“England,” I said. To most Argentines, the British Isles were simply ‘England’.

“England!” Martinelli beamed. “For England, this Semillon is perfect. All Englishmen are lords! They can’t tell wine from hog piss!”

As we left, he grabbed me. “Half-price for the lot!”

We left Martinelli shaking his head at my inability to appreciate a good deal.

Back home, Viviana agreed that our reputation depended on providing good wines with the guarantee of the same quality year after year.

“So, we must visit my friends at the Bodega Familia Giaquinta in Tupungato,” Damian’s tone suggested this might be our last chance. Tupungato was an hour-and-a-half’s drive across the scorching and parched uplands that separated our city of San Rafael from the Valle de Uco. “But,” Damian warned me, “don’t be too hopeful. Whites are in short supply.”

Damian, his wife Elba, Viviana, and I left for Tupungato next morning. Every time we drove across the drylands, the scenery took my breath away. The occasional scrawny cow perpetually searched for something nutritious on vast range of spiny shrubs. Dry gulches lined with ochre pebbles spoke of drought broken only by infrequent downpours. Beyond the dry flatness shimmered the foothills and above these the Andes rose in majesty, their snowy white peaks piercing the flawless blue sky. About half-way, the oasis of Las Carretas, fed by winter snowmelt from the mountains, provided life-saving irrigation for thousands of hectares of garlic, potatoes and vines. Slim windbreaks of identical poplar trees delicate in their green leaves, protected the fields from scouring winds that swept down to the plain. A tiny church, the Capilla de Paso de Las Carretas, gave evidence of the reverence of the original Italian immigrants. They’d been encouraged to settle and cultivate isolated regions for fear that Chile might spill east over the Andes.

“What a breath-taking location!” Viviana was struck by the surroundings of the Bodega y Viñedos Familia Giaquinta – Winery and Vineyards of the Family Giaquinta -- spread across an ample slope below Tupungato. Before us, the Valle de Uco stretched downwards across the high plateau where a quilt work of green vineyards merged into the horizon. Beyond the haze, the drylands would give way to the Pampas blessed by rain where the world’s best grass-fed beef cattle are herded by gauchos, Argentine cowboys, beautifully captured by Molina Campos in his series of drawings. Though caricatures, they represent the quintessence of gaucho life. Behind us, dry scrub swept upward to rise into the majestic snow-capped Andes that separated Argentina from Chile.

Jorge smiled his welcome at Damian and then us. But when Damian explained out mission, he looked crestfallen.

“White? Unlikely. But we can speak to my brother.”

Viviana looked at each other in disappointment.

“I manage the winery and sales from here.” Emilio gestured as he led us to the comfortable adobe building that served as his office.

Ignoring our predicament, both brothers spent a few minutes amiably chiding Damian for not visiting more often. It was clear that they enjoyed a solid friendship. Then, smiling, Emilio turned to us. “You need a white?”

Viviana gave a brief history of our two years growing grapes. How we enjoyed some small success exporting our 2005 cabernet sauvignon. How we needed a matching white. When she’d finished, Jorge shook his head sadly, but Emilio looked thoughtful.

“I appreciate your challenge!” Emilio opened the huge leather-bound ledger on his desk. “Friends of Damian’s are friends of ours. I may just be able to help.” With that, he and Jorge withdrew for a few minutes. They returned.

“We can offer you a small amount of one of two whites, a Pedro Ximénez or a Torrontés.” The brothers smiled affectionately at Damian. Damian smiled back. We were learning what friendship meant in Argentina.

Emilio led us to the winery where a busy bottling line was in operation.

Jorge poured each wine into glasses. Both were delicious. Viviana and I looked at each other in delight. Both would meet our standards. We opted for the Torrontés. Argentina was slowly building a reputation for two flagship wines, Malbec and Torrontés. Once our orders grew, we would offer both.

“How soon can we pick it up?” I was planning to drive two five-hundred litre plastic tanks and bring them back to the winery in San Rafael where we bottled our own.

“Bring your labels, stoppers, and capsules here. We will dress the bottles here.” Emilio said.

“And case them a dozen to a case,” Jorge added.

We were overjoyed. Wine is the better for less handling. Moreover, we could have our transporter pick up the laden pallet off the Giaquinta winery floor and take it to Puerto Nuevo near Buenos Aires for the boat journey to England.

Confident that we were in good hands, we sealed the deal there and then. Bottling of our new Torrontés would begin as soon as their bank in Tupungato received the transfer from our bank in San Rafael. We would provide the necessary paperwork to satisfy the bureaucracy, as well as our corks and labels.

“We’ll have lunch together in Tupungato to celebrate our new friendship.” Emilio, Jorge, and Damian were grinning from ear to ear.

Without consulting the menu, Jorge asked for a plate of grilled trout for six and baskets of bread. We accompanied the meal with the Torrontés that we had just bought. Soon, it would be enjoyed in Scotland as our CALEDONIA Torrontés.

“Torrontés?” David Henderson’s enthusiasm was evident despite the twelve thousand kilometres that separated us in San Rafael from his business in Edinburgh. “An excellent choice! I’ll begin preparations for our Christmas promotion immediately.”

We sat with Damian and Elba in the seclusion of our garden, toasting the consortium that was slowly growing around Fincas CALEDONIA the Scottish Tradition in Argentina. Viviana and I were learning that in Argentina nothing can be accomplished alone. Thanks to Damian’s extensive contacts bound by ties of friendship and obligation, to sage advice from our accountant and from our export agent – and just a little, perhaps, to our own daring, we were making modest progress as accidental winos.

But in Argentina, the most unexpected was often awaiting just around the corner! 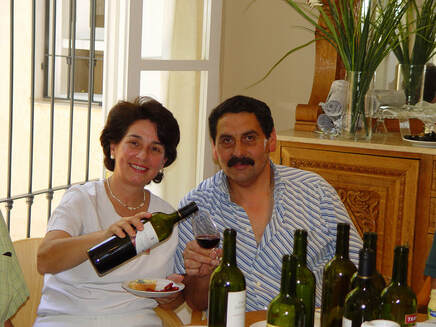 Viviana with Edgardo our winemaker
​