Stubborn to a Point by Andrew Klein

I have spent many years out on the road. Often times I found myself, for several reasons, playing music in the crowded streets of places like Oslo, Amsterdam, and London. My voice, accompanied by my guitar, would sing popular folk-rock tunes in exchange for money, refreshments, and even smiles. I always enjoyed these mini concerts and, for the most part, believe the folks passing by felt somewhat the same.
Occasionally my musical sojourns would attract those who would ask me to stop, or move along, or go home. Rather than incur certain troubles I would usually nod, smile, and follow directions. However, there was one occasion with which I refused, and, for some reason stood my ground with fearless, and unshakable petulance.
On the streets of Tokyo those who are doing business must take care not to cross the dreaded Yakuza. If one is making money, but not paying off the Boys then one could find themselves in a world of hurt. The Japanese syndicate would just as soon wipe offenders off the face of the earth as they would collect their 'taxes'. It is in this grey world of street culture that I found myself up against these thugs with only a strong sense of pride, very little linguistic skills, and a strange 'western' idea that injustice cannot carry the day.
I had seen other 'buskers' on a certain corner of the city and knew that, at least most times, it was allowed. In fact, I myself had been there just one day before. However, as luck would have it, this day would be different. There were three of them brandishing the typical attributes of the gang. They each had various lengths of unnaturally curly hair, several visible tattoos, and missing pinky fingers. I really didn't think they looked very scary.
I had just finished a Simon and Garfunkle song when the three came across the road and asked me to move. I knew the Japanese liked the duo's music so it could not have been the tune I played, but these guys were serious so I collected a few bills and moved down the street. I Played a Bob Dylan song followed by a Lloyd Cole tune and sure enough, right as I was receiving lots of yen, the boys showed up again and pointed towards the subway and, with raised voices, asked me to get lost.
At this point I said something back to them, which one of them, who I'll call 'Curly', did not like. He kicked my guitar case into the street. I said,"OK, OK I'll leave", and packed up. As I headed towards the trains I heard another busker playing and I sat down to watch. The boys came around the corner and rather than stop the guy from playing they actually tipped him, and kept walking. After a few more tunes he packed up and left. I took the opportunity to play a few more songs in what I felt was a safe spot. A Neil Young tune followed by a Beatles number and then the Boys showed up again. They seemed upset. Curly was yelling about something, and I reminded them that the other foreigner played right before me. I could not understand what their problem was.
Curly cursed me and then came at me with a knife drawn. I put my hands up and said, 'OK, OK, I'll go', but Curly had enough of me and poked at me with the blade while cursing loudly. The other two stopped him from killing me and he was so upset at his loss of face that he swung and clipped me in the cheek. At that moment another gang member came and yelled at Curly. He turned to me and explained, in English, that I must not make that guy upset as he is crazy. He said I could play one more song and then never return to that street again. I thanked him and sat down to play a beautiful rendition of 'Tangled up in Blue' by Bob Dylan. I collected a fair bit of yen for that one and then packed up and headed for the train back to my place. As I walked along I said to whoever was listening, 'I really didn't think I was that bad'. 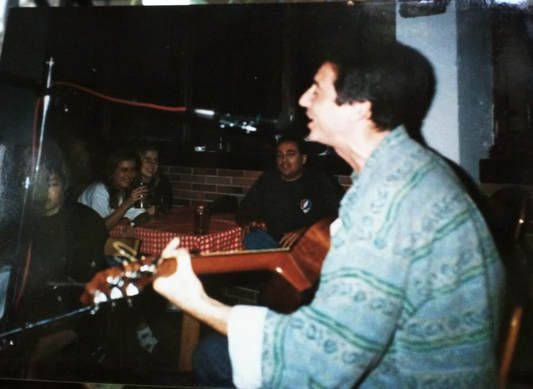