Road Trip through Europe, circa 1970 by Sine Thieme

When I grew up in Germany in the 1970s, every summer my parents would rent a cottage in a godforsaken village in Southern Italy or France – always a different place – where we'd live for three glorious weeks completely cut off from the world. These were the days before mass tourism would consume Europe, before hordes of Germans fashioned Mallorca into their own backyard, before flying anywhere was even a thing. We were trailblazers, trekking into alien lands where we’d stand out like a sore thumb.

Our trips always started the same way: On the big day in June, my dad would get up at 3 o'clock in the morning, claiming the need to “beat the traffic,” and work himself into a frenzy trying to pack the car. Invariably, the suitcases were impossible to fit into the trunk, my mom would have nothing ready and hustle about for last minute additions, my brother and I would pick that moment to start an epic fight, and my father would grow increasingly impatient trying to fit individual shoes into the gaps between the bags and duvets and pillows. Vacation homes back then did not come with bed linens or much of anything else, so that our car took on the proportions of a covered wagon, even though I now know that it was barely the size of a Volkswagen Polo. By 4 a.m. my father usually lost his patience and could be heard banging on the trunk like a wild man to force it shut, dents be damned.

By the time we were finally driving through the deserted streets of early morning, my mother and father were barely speaking, with so much tension in the car that you could have sliced it with a knife. Until it was shattered precisely 30 minutes later by my mom's scream of "oh God, I forgot to turn off the stove!"

It was a marvel to observe the changing landscape the farther we got away from home. I loved getting to the first border post – they were still very much in place in those days – and having to wait for hours, staring at the armed guards in their exotic uniforms. And then the drive through no man's land, a concept that fascinated me like no other.

"How come it doesn't belong to anybody?" I would ask every time.  "It has to belong to somebody!"

There were many other novelties to relish, even those of much smaller caliber that often times escaped the less-observant eyes of the adults. For instance, when you drove into France, the markings on the road would change from white to yellow. Yellow! How utterly exciting. There were miniature traffic lights at the front of every intersection to give the driver first in line an easy glimpse of the light without twisting his neck into a pretzel. And there was the longest tunnel I’d ever seen leading us through the Alps with the miracle of the Mediterranean sunshine waiting on the other side.

It was glorious. Nothing I anticipated more during the entire decade of the 1970s than our annual pilgrimage to distant lands.

The highlight of each trip was the Awarding of Toys around midday, or however long it could be delayed without mutiny. My oldest brother – let's call him Kissinger for his diplomatic skills – always sat in the middle to separate me and my other brother – let’s call him Tempest. Since there were no diversions of the electronic kind like today’s generation of road-tripping children has in abundance, the only thing left to do, after exhausting all the license plate games, was to practice debating with your brother. Or maybe nudging him just a tiny little bit. And then pinching him, in case the nudge went unnoticed. Whatever you had to do to elicit a punch in return, which was exactly what you'd been hoping for so that you could finally wail "Mom, he hurt me!"

Having grown tired of his referee position, Kissinger had developed a brilliant plan of self-preservation involving two small toys, like matchbox cars, and their handover in exchange for exemplary behavior. These toys were even better than the border posts.

Even so, the occasional flare-up of bad behavior could not be avoided, which is how one year, somewhere in France, my dad abruptly stopped the car on a lonely stretch of road. Tempest was made to get out, no doubt for committing the cardinal sin of ignoring my father’s count of 1-2-3, and we simply drove away.

I couldn’t believe my eyes. How could they? Leave behind my beloved brother? Never mind that I was most certainly the mastermind behind his tantrum or whatever misbehavior had caused his banning, and never mind that a second earlier I had hated his guts and wished him out of the car. The situation called for extreme measures. I commenced wailing in the highest registers I could muster, screaming for the immediate return to the place of abandonment, and didn’t let up until my mother gave the nod for my father to swoop back and pick up his wayward son. I can’t tell you how happy I was to see him still standing as we had left him, bedraggled as a puppy with huge eyes, and the same unwavering faith in our eventual return.

I’m sure the peace didn’t last long. I went on to torment my brother for many more years, but this event has always stayed with me. Long before I became a parent myself, I knew one thing about parenting beyond any doubt: I would never, ever, leave a child on the roadside far from home, however short-lived it might be.

How I almost broke that vow is a tale for another day. 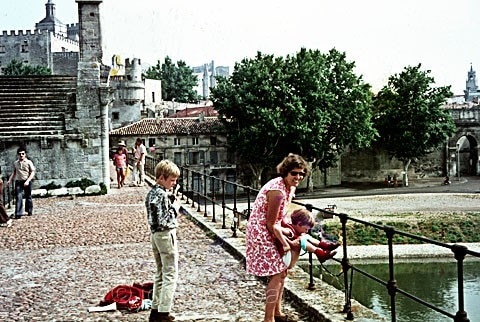 ​Sur le pont, d'Avignon, on y pisse, on y pisse... One of our childhood road trips, ca 1971.
Peeing off the Avignon bridge with my brother looking on is not one of my proudest moments.
​
Add your comments about this story on the Blog page.
​