“THE MOM” CRASHER by Nancy McBride

INTRODUCTION
Some folks seem to process a spontaneous streak that can strike them as if they’re shot out of a cannon. Surprised folks along their trajectory can be seized with a sudden yearning to accommodate them in whatever whimsical adventure has been set in motion. Energized, they often literally trip over themselves to assist those possessed. That siren calling can be magnetically mesmerizing. Its force is strong, determined, focused and, in this case, inspired primarily by love—well, more like love in its raw primal form—a mother’s love. No one would dare mess with that fierce urge to protect. Yes, my friends, strangers become complicit in ways they could not have imagined, finding themselves snapping to attention, even saying, “Yes, Ma’am,” or in this case, “Oui m'dame! Tout de suite!”

THE MOM
When my girls and I moved east to Massachusetts, in 1984, we knew no one. So, we eventually did the logical thing and “adopted” foreign students from a nearby university who were far from home. They liked having a “Mom”, and they each became wonderful older brothers for the girls. We met their families over time, and my “boys” totally enriched our lives over those college years and to this day.

It was now 1992. Having just finished a second Master’s degree at Cornell, my “#1 son”, Jason, from Singapore, was staying with me while job-hunting. He was about to visit his fiancée, in France, for a month. Before he left, I’d asked him if they’d get married, there. He had no idea. They had postponed their wedding once, already, because his grandmother had died, and according to Chinese custom there should be no celebrations for a year after a loved one’s death. I’d planned on going to Singapore for that occasion, and had blocked vacation dates. Due to wedding interruptus, and needing to use those pre-saved vacation dates, I, serendipitously ended up in Australia for $742 RT, apparently destined to experience how to “be seen”—another story. If they married this time, I’d told him I just couldn’t swing it without lots of saving and planning. He understood.

Ten days later, on a Thursday, I received their air-mailed wedding announcement stating that they’d marry that very Saturday. OK. Good. Finally. The next morning, Friday, I told my secretary, and she asked me if Jason’s parents would be attending his wedding.

“Hummmm…I don’t know. I expect so.” Curious, I called Isabelle’s home—6 PM, in France—to ask. I congratulated Isabelle then asked for Jason, who informed me that it had been too short notice for his parents, but they were sending his sister from Singapore with a paid escort!

“When’s the wedding?”
“Two-o’clock, tomorrow!”
“Where ARE you, anyway?”
“Not far from Chatellerault…”

Apologizing, they had to dash for the civil ceremony.
“Oh! Okay! So sorry I can’t be there, Honey! Love you!”

NO PARENTS AT HIS WEDDING?

My secretary left for lunch mumbling, “Well, I don’t understand why his parents aren’t going…”

NO PARENTS AT HIS WEDDING?

Then, POW, it sunk in, and my adrenalin exploded! “The MOM” in me (the nickname my kids used when I really mean business) lunged into action. Something snapped! Throwing caution to the wind, I just knew I WOULD BE THERE FOR HIM!
“The Mom” to the rescue!

I called Sam, my boss, who was playing golf. I told the club manager to get him, now, it was an EMERGENCY! When my boss came puff, puff, puffing to the phone, ten minutes later, I said, “I have to go to Jason’s wedding!”
“What? When?”
“NOW, in France!”
“Now? France?”
Apparently swept up in my enthusiasm, he sputtered, “Yes!”
Then, as boss, “Wait! No!”
Aghast, I gurgled, “NO?”
“Not unless I can go with you!” he laughed, relenting!
“Sure! Explain it your wife,” I retorted, “…and I’ll meet you at the airport!”
“Is your ass covered?”
“Yes. Not much to cancel.”
“Have fun!”
My hero! Whew!

Next, I called Northwest Airlines to ask if I had enough frequent flyer miles to get a round trip ticket to Paris, that very evening, and return home from England two weeks hence. Yes, I had them.
“OK, book me, please, and hold them for confirmation.”
“But, ma’am, we must mail you a frequent-flyer voucher! That’ll take about two weeks!”
“Not acceptable. I need to go now. What can you do to make it work for me?”
Hesitating… “Well, I’ll ask our manager if he can make an exception.”
“Wonderful! May I speak to him?”
“The manager?!”
“Yes.”
“Um…Okay, I’ll try to get him.”

Manager, “Yes, Ma’am, what can I do for you?”
“I have enough frequent flyer miles and need to use them for an emergency. I must go to France to my son’s wedding, because his parents cannot.”
(His brain must have skipped a few logical beats with that confusing information, but by then he was already caught up in my emotional tsunami, practically gripping my hand through the phone line to enable me!)
“I will personally have your boarding pass waiting for you at check in! Have a wonderful trip!”
(I may have called him “MY HERO!” and made kissy sounds.) WOW!

Okay, London, next. I phoned Michael, a British actor I’d met when he was touring the US with Shakespeare’s “As You Like It”, in 1974. I’d interviewed him for my talk show, and longer story short, we’d become extended family. So, England being just over the Channel from France, I assumed I’d visit him en route home, right? I caught him! Equally surprised, he said, “Come, of course! We’ll be home!” I’d confirm and call with details, later. Sweet! More kissy sounds.

By sheer luck, my niece, a young model working in Paris, was home. (Of course she was!)
“Hi, Sweetie! Can you meet me at such and such a plane at 8:30 tomorrow morning, and get me to a train? Jason’s getting married!”
(Whining) “Aunt Nancy, I’m just going out nowwww, and I’ll be out laaaate.”

“One question, Sabina. Who’s your favorite aunt?” Ha! That sealed it! She’d be out until the wee hours, and she had no message machine, so, no going back! Voila! I confirmed the tickets. “The Mom” was being propelled there, practically under her own power! Were these angels each just awaiting my call? Apparently, they were!

My eldest, working in Boston, was quickly filled in, then I drove to where my youngest was a lifeguard for the summer (no phone). I called out across the pool, no time for an explanation, “I’m going to Jason’s wedding, so I won’t be home for two weeks! Love you! Call your sister if you need anything!” Used to my impetuousness, she waved acknowledgement and blew a kiss.

After jotting down a toast for the reception in French, I called friend to confirm my translation. With a tweak or two, he did. My intern agreed to drive me to my house, then to Riverside Station, so I could get the train to the Boston airport, because, luckily, my super-charged brain remembered the Tall Ships were in Boston Harbor for the public to view. The car traffic would be brutal.

To my secretary:
Eleanor,
If I do not return from lunch, I’ve gone to Jason’s wedding somewhere in France.
Sam and kids know.
Please cancel all appointments scheduled through August 1st.
Thanks!
Nancy

I stopped at the bank, got travelers checks, went home and threw my passport, camera, film and a few clothes into a backpack and duffle bag, and, thanks to my intern, and on-time commuter trains, I made it to the airport with scant minutes to spare before takeoff. The boarding-pass was indeed ready at the check-in desk, and after I sprinted onto the plane the door shut and we were airborne.
Whew!

Bleary-eyed Sabina greeted me in Paris and got me to the train station where I planned to travel to Chatellerault. I exchanged some traveler’s checks, and got the train ticket I wanted, then discovered it was for the train after the one I wanted! I cut back in line (so sorry, really…), and complained. Ticket man: “Ess FOOL!” Let’s be clear, here, I needed to be on that train or all was for naught, so I firmly stated, “I need to be on that train, or all is for naught!” Shrugging, returning my money, “You! You stand UP!” Fine. I stood up.

Other passengers standing up between cars, assured me that they rarely paid, there. Of course, the only one the conductor charged was me. The others, embarrassed for me, their guest—now friend—kindly shared snacks.

It was a fast Z-train! If we arrived at Chatellerault on time, I’d simply call Isabelle’s house, and someone would pick me up! (What presumptive cloud was I ON?) When we disembarked and I went to call, I discovered I needed a phone card! The pharmacy where they could be purchased was closed! Nothing was open. The station was almost empty. Beyond dismayed, and only an hour from the wedding time, here I was, so near, yet so far. Now what? A taxi? None in sight. Crap! I sat, dejected, on the steps.

Two of my train mates stopped and asked me what I needed. I needed a phone card. The sympathetic look in their eyes broke my heretofore bravado, and tears sputtered along with my stuttering, hiccupping story. Sophie comforted me, and Jacques used his phone card to call Isabelle’s number. Connecting, he soon started taking copious notes! Saved! MY hero! They piled me into their car and we sped off some 20 miles through the countryside, swallowed by endless sunflower fields. Obviously, they were going totally out of their way to make sure I made it! Raising a cloud of dust, they careened through an open gate into the driveway, and unceremoniously dumped me at Isabelle’s parents’ medieval country estate, tear-dried, cheek-kissed and miraculously on time, cutting it to the nano-second quick!

Formal folks were drifting out of the house into cars. As I stood there collecting my bearings, the ensemble paused mid-step, puzzled. Who was this scruffy, crazed blond with a backpack? I carefully enunciated, “Je suis la mere de Jason!” Well, readers, Jason is Chinese, and I’m not, so gesturing wildly, I explained further, “Sa mère américaine!” “Ah, mais oui! Donc, c'est la Nancy.  Viens maintenant!” Someone rushed me into the house to pee, slip on my dress, wash my visage, slap on some lip gloss, and fluff my hatless hair, then we were off. At the church, I paused, took a deep breath, walked regally down the aisle, and serenely sat on the groom’s side in the front row, as if I, “The Mom,” mother of the groom, had been expected.

EPILOGUE
• Jason and Isabelle were amazed and delighted that I’d surprised them.
• Pouring, the outdoor reception was hastily shifted into the estate’s sheep barn.
• When the startled sheep got loose among the makeshift tables, mayhem ensued.
• Still in their vestments, the officiating African priests herded the sheep (so like their own flocks) that were scatter-shot through the soggy sunflower field.
• The event quickly became a fun, French farce of the highest order.
• The teetering Croquembouche was amazing.
• Toasted for my petite speech in my appalling French, I felt appreciated.
• As champagne flowed, I made several relaxed, jet-lagged attempts to communicate en français. (Who knew a champignon—mushroom—also meant zit, at least to the resident 5-year old?)
• Random guests played volleyball in their pajamas at 4 in the morning.
• A VW convertible delivered piles of bagettes, often.
• The party continued for (was it two or three?) days.
• I then spent three days in Paris with some of Jason’s friends.
• Next, I went north to St. Malo for three days and nights, then on to London via ship, coach, train, then, finally, The Tube to meet Michael at a very specific pub. I arrived and he wasn’t there…and therein lies another story. 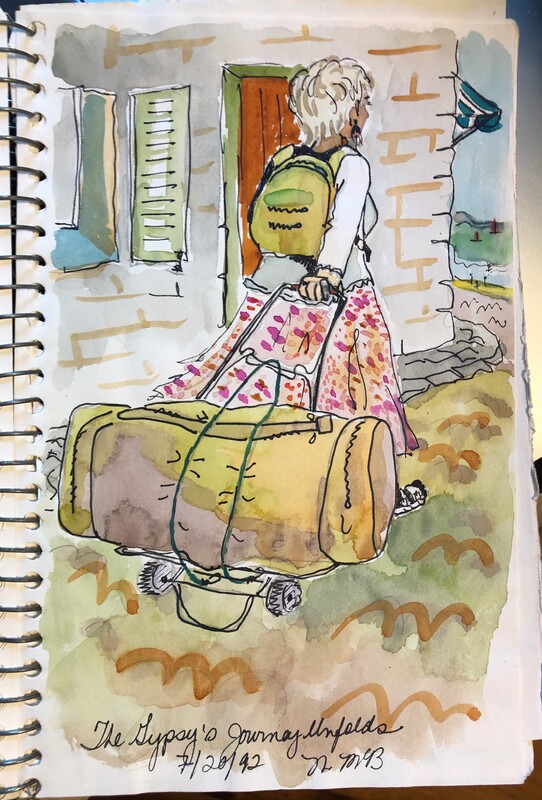 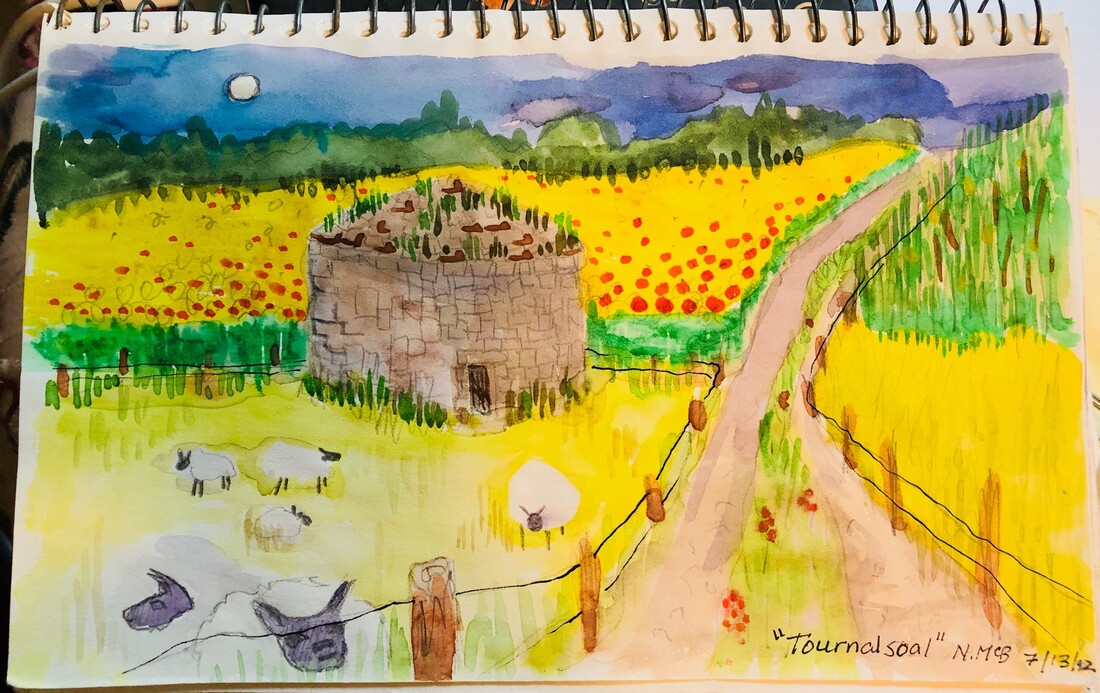 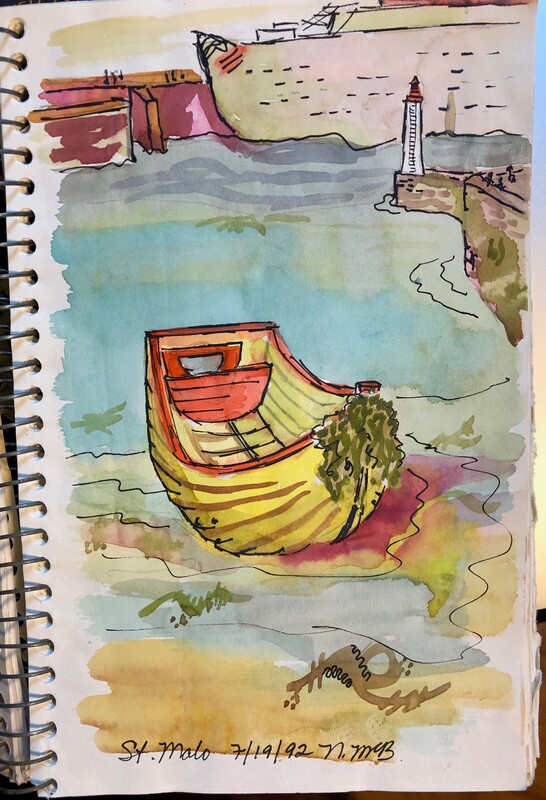 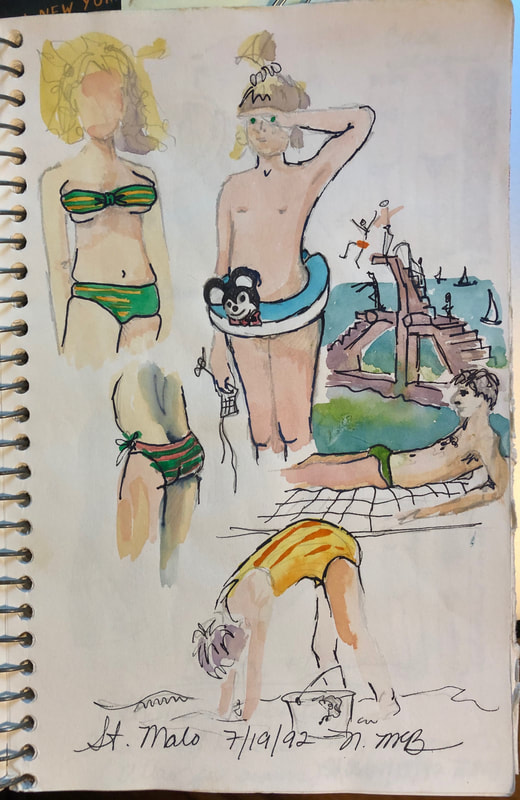