THE ROAD HOME by Syd Blackwell

​The road home can take some unusual turns.    Our return from a visit to world-class Iguazu Falls had twists that seemed miraculous.

We arrived in Foz do Iguaçu, the Brazilian city adjacent to the falls, on Thursday evening.  During the Friday group visit to the Argentinian side of the falls, our guide informed us that our airline, Pluna, had cancelled the return flight to Montevideo scheduled for Sunday night.  He said arrangements with other carriers would be made and he would keep us informed.

By the Saturday tour on the Brazilian side of the falls, most had learned how they would be travelling.  We had not.  At our hotel, late Saturday afternoon, we received a phone call from a Sao Paulo-based tour representative.  The connection was bad; the representative only spoke Portuguese.  Neither of us speak Portuguese. We understood someone would phone again Sunday morning.  We checked emails hoping that Geant Travel in Montevideo, where we booked this tour, had sent a message.  They had not.

On Saturday evening, our group enjoyed a dinner and Brazilian revue.  Everyone else knew how they would go home.  One young woman, who would be leaving at 6am via Sao Paulo to Montevideo, was a vacationing Pluna employee.  Incredibly, when we returned to the hotel after midnight, she gave up some of her valuable sleep time and called Pluna.  She got us a confirmed booking on the next Pluna flight leaving Foz do Iguaçu.  Unfortunately, not until Tuesday evening.  We would never have been able to do this ourselves.  We were very grateful.

It appeared we would have to stay two extra days and we had not prepared for this.  We went to bed hoping the promised call on Sunday might provide a better answer, but at least we had a way home.

The call finally came at 2:30pm.  Again, the agent spoke only Portuguese.  The only part of the message Gundy understood was something about 42 kilometers.  After repeatedly telling the representative, in Spanish, that she could not understand, he hung up.

We decided to go for a walk.  In the lobby, we noticed Darcio, the only English-speaking desk person, was at work.  We told him about the call in Portuguese and the poor connection.  We asked him to take a message if an agent called back.  He decided to call the agent.

He learned we were booked on a flight leaving from Puerto Iguazú, across the Argentinian border, 42 kilometers away.  And, we had little more than an hour to get there.  But how?

A driver who had arrived to pick up somebody else, overheard the situation.  He immediately used his cellphone to call for assistance.  He told us a driver named Judo would arrive in about ten minutes and would get us to the airport.  How incredibly fortunate he came at just the right moment, overheard the problem, and cared enough to solve it.  We hastened to our room to pack.

Judo had his own miracles to work, circumventing a long line-up at the Brazilian border crossing, getting VIP service from the officer at the Argentinian border station, and getting a friendly wave-through from a team of police searchers who were stopping most other vehicles.  He spoke English and we had a great conversation.  We got to the airport with time to spare.   We thanked Judo and said goodbye.

We hurried inside and went to the Argentinian Airlines desk.  We had no tickets and no information at all about the flight except the departure time.  The agent had three flights leaving that evening.  All were fully booked.  None matched the departure time we had been given.   A computer check, using our passports, revealed we were not booked on any of his flights.  He pointed us to LAN, the only other airline desk at this airport.  There was a very long line.

As we joined the line, the Argentinian Airline agent reappeared beside us and took us past the whole line to a LAN agent off to one side.  We gave him our passports and he quickly confirmed we were booked on this flight and should immediately go back into the lineup.  How incredibly thoughtful of that Argentinian Airlines agent to continue to take care of us.  We also saw Judo, our driver, still hanging around.  He wanted to make sure we were actually going to fly, and, if not, he would take us back to Brazil.  Again, incredibly thoughtful.

Soon, the lineup was processed, and very soon after we boarded a LAN plane.  Our boarding passes showed we were flying to Buenos Aires.  We had no information about what would happen there.  Still, it felt good we had got this far so quickly.

Through security, we found a couple from Spain who had been part of our tour group.  They had also flown from Puerto Iguazú, but on an earlier flight, and would take the same Pluna flight as us to Montevideo.  There, they had a rental car waiting to drive to Punta del Este. They offered to take us to our home in Villa Argentina on the way.  This last flight was delayed and we arrived in Uruguay at 10:30pm.  The buses that service the airport on Sunday nights are infrequent.  However, we no longer needed to wait for one.  Incredible!

We were dropped off on the side of the highway adjacent to our home shortly after 11pm.  We never imagined such a result as we sat frustrated in our Brazilian hotel room earlier that afternoon, but the universe was looking after us. 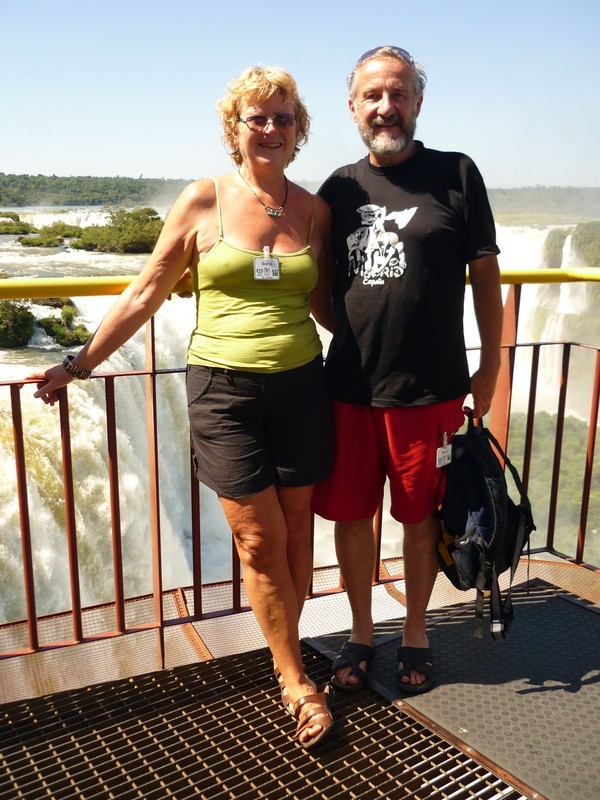