​ONE DAY IN CANADA – A JOURNAL EXCERPT by Syd Blackwell

Thursday, June 20, 2013
We woke before 8:00 in our wonderfully comfortable, rustic bed in a private guest room in Jasper, Alberta.  We put coffee on to brew, then crossed the street to a convenience store that featured some bakery goods.  The pastries were too sweet, but we knew that my friends Frank and Linda, our next hosts, were preparing healthy salads, free-range chicken, and buffalo, for us that evening, so we would recover.

When we passed the controlled entrance to the Parkway, the spectacular highway that runs south down the spine of the Canadian Rockies past the Columbia Icefields to Lake Louise, we were asked if we were going to Calgary.  We were not and were waved through without explanation.  As we learned later, the Trans-Canada Highway, heading east towards Calgary, was already closed at Banff.  However, our intended route ran north to south through Jasper, Banff and Kootenay National Parks to Radium Hot Springs and, then through the East Kootenay valley to Cranbrook, an incredibly beautiful 500 km drive.

Our first photo stop was at Athabasca Falls.  I had stopped here many times, but the site was much improved with walkways that allow visitors very close access to the falls and the gorge below.  The water was higher and stronger than I had ever seen before.  About 15 km further up the road we stopped at Sunwapta Falls, another tremendous surge of water.  When we arrived at the Athabasca Glacier, the tongue of the Columbia Icefields that extended nearly to the highway when I began my first summer job there exactly fifty years before, it was a shockingly tiny remnant of its former self.  The historic roadside chalet where I had worked had been replaced by a modern monster lodge.  We did not linger long.

When we tried to head south, a truck was parked across the highway.  A man spoke to each car in turn.  He told us the road ahead had been blocked by two mudslides and he estimated a ten-hour delay, at least.  Gundy was not yet aware of how significant a problem we faced.

As we drove the 100 km back to Jasper in increasingly heavy rains, I explained to her the two choices we had.   By the shorter route, we would travel in Alberta, northeast past Edson, south through Rocky Mountain House to the David Thompson Highway, east to Red Deer, south through Calgary to Fort MacLeod, and then west through the Crowsnest Pass to Cranbrook.  The other route was in British Columbia, west to Tête Jaune Cache, southwest through Valemount and Clearwater to Kamloops, east past the Shuswap Lakes, through Salmon Arm and past Revelstoke, over the Rogers Pass to Golden, southeast to Radium Hot Springs and then south to Cranbrook.  I much preferred the Alberta route as it was just over 900 km in total.  Gundy, who disliked Calgary, and knew prairie driving was boring, did not want to go through Alberta.  I agreed to go by the much more scenic BC route, realizing that we would not make it to Cranbrook that night.  We had no other information to make our decision, but it would prove to be the best decision.

As we neared Mt. Robson again, the rain ceased and the highest mountain in the Canadian Rockies was nearly two thirds visible.   We stopped for photos and for the first time learned from other travelers there was extensive flooding happening in Alberta and many roads were closed.  I felt much better about Gundy´s prescient decision to avoid Alberta.

The day turned sunny as we drove south and followed the glacial North Thompson River on its route to join the Thompson River.  Gundy enjoyed the lush, green beauty of a drive she had never before taken.  When we stopped in Clearwater some hours later, Gundy encouraged me to continue with our plans to visit Frank and Linda, albeit just for one night instead of two.  I agreed and phoned Frank to explain we would not arrive that night, but would arrive the next day.  He was well aware of the flooding and told us the roads through Kootenay National Park, and through the Crowsnest Pass, had also been closed, but that the route we had chosen was still open.

We stopped briefly in Kamloops at a highway restaurant for a disgusting, over-priced meal.   I was worried about Rogers Pass which lay ahead.  It is often closed by slides.  I knew we needed to get over the pass that night, if it was still open.  Golden was still four hours away.  By the time we re-fueled in Salmon Arm, the rains had started again.  It was pouring and nearly dark as we passed our former home of Revelstoke and began the climb up Rogers Pass.  By the summit, our headlights were so ineffective in the blinding rain that I pulled over and attempted to clean them to get a little more illumination.  As we started driving again, I said I wished a big truck or something with stronger lights would pass us so I could follow its tail-lights.  A minute later, a gigantic pickup truck overtook us.  I did not let it get away until we had reached the flats at the bottom of the east side of the pass.

We checked into a motel in Golden at midnight.  I had driven more than 1000 km since breakfast.  It was the eve of the longest day of the year (in the Northern Hemisphere), but it felt like we had already had the longest day.

Epilogue
We had 250 km to drive the next morning from Golden to Cranbrook.  Just 68 km north of our destination, a massive highway bridge across the Kootenay River at Skookumchuck began to fail and was closed.  There were no alternative routes.  We had to turn around and retrace our drive 400 km to Revelstoke.  We never did get to visit Frank and Linda. 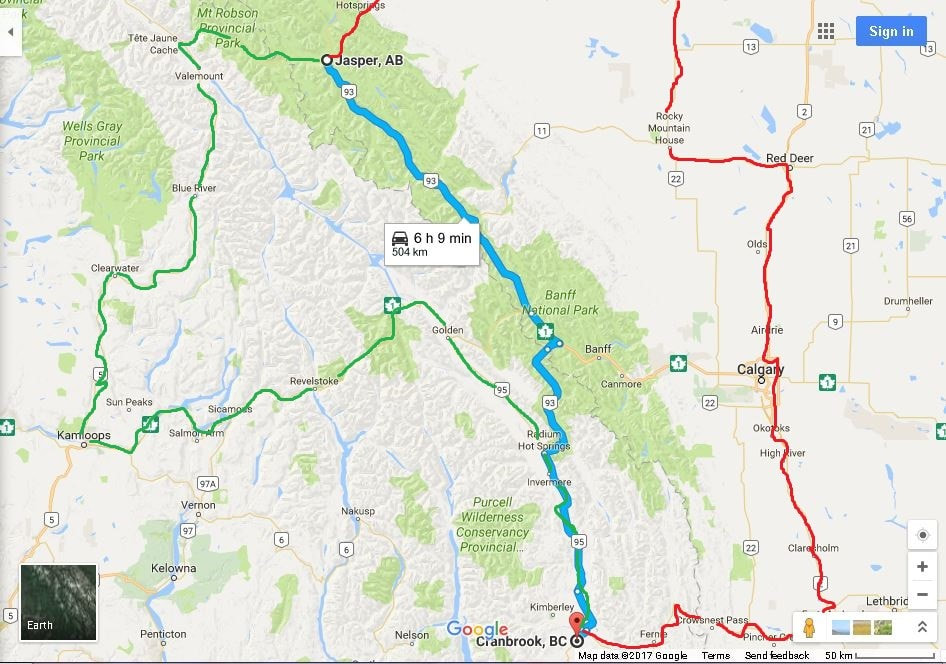