“You won’t have much spare time but if you do find you have an hour or so and you decide to go into town you must always go out in pairs. You will at all times walk as if marching - in step and your arms swinging up to shoulder height. You will not go out without a purpose. In your mind you will have a definitive objective. You will never wander about looking lost or as if you had nowhere particular to go. When you have done whatever it is you set out to do, you will return to your billet marching as before.” These words were included in the opening address to AC/2 Cadet Aircrew shortly after they had arrived at No. 11 Initial Training Wing (I.T.W.), Scarborough some time in 1943. I know because I was one of their number.

Eleven Wing was divided into four squadrons and each squadron into four flights. ‘C’ Flight, 3 Squadron, was billeted in the Prince of Wales Hotel and our activities were centred on the hotel, the Spa, the greens in the immediate vicinity, the swimming baths, the firing ranges on Oliver’s Mount and all the roads, squares and slopes down to the front nearby.

We fired Browning guns and rifles and practised clay pigeon shooting with double-barrelled shotguns up Oliver’s Mount. We received morse code signals flashed by Aldis lamp from high up in the Grand Hotel. One night whilst on guard duty I failed to wake up the early calls as a consequence of which the cook overslept and breakfast was late. For this I was given three days confinement to camp which included some running at the double wearing full pack. I learned to swim one hundred yards using the breast stroke. These lessons took place in the old public baths long since gone. The instructor was a sergeant P.T.I. and when he ordered, “Now take your feet off the bottom” it was imprudent not to do so.

My two roommates (one of which was an Indian Parsee) and I had meticulously built bed packs, and so as not to have to keep remaking them we helped each other lift them off and on to our bedsteads. There was a picture of the bed lay-out on the wall and our sergeant came round and inspected our room daily. We kept the room scrupulously clean making sure there was no dust on the top of the door which could be removed by the enquiring thumb of authority. We were quite proud of the brilliant white flashes in our caps, our pollarded buttons and the smart white belts around our waists. 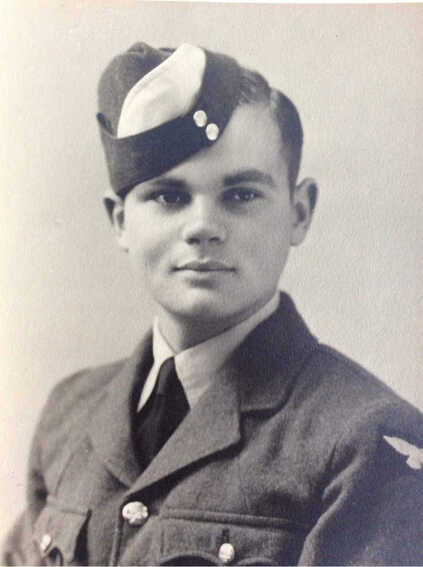 I remember also running along the front in the very early morning, a thick mist seeming to drift in from the sea. We were clad in navy shorts, socks and heavy boots, from our mid-riff to our head being bare. The purpose of our being at I.T.W. was to undertake a course in the main ground subjects required by air crew. These included Navigation, Armaments, Engines, Theory of Flight, Signals Procedure, Meteorology, Morse Code both visual and aural and for most of these the classrooms had been set up in the Spa. We crocodiled down to our classes after breakfast and back up to the hotel for lunch. Down we marched again after lunch and then back up again after the last class of the day. We also took our turn at guard duty and fire-picket duties and learned continuity drill and some unarmed combat. I’ve never worked so hard in my life. However, at the end of the course there were examinations. Success in these meant one could proceed to Elementary Flight Training School (EFTS), flying Tiger Moths, after a period of leave. It also meant a rise in pay from three shillings a day to about seven shillings - but I cannot remember the exact figure.

Next to the Prince of Wales Hotel was ‘Red Lea’ which in those days was a teachers’ training college for young ladies. Many temporary liaisons resulted due to the proximity of so much female talent. One evening when I was on guard duty - posted as a sentry outside the hotel - I was teased by two of them leaning out of the ground floor windows. I remember they spoke to one another in French and I heard them say quite clearly “pauvre sentinel” but situated as I was there was no possibility of returning flirtatious comments.

My second stay in Scarborough was about seven years later. I was then a young teacher and I attended a Summer School course in Speech Training and Dramatics. All the students were young teachers ostensibly attempting to acquire some knowledge which they could take back with them and use in school productions. In fact most of us regarded it as a cheap method of getting a summer holiday. We were surprised to be worked so hard but there was a lot of fun to be had as well. Some of the things we were asked to do seemed ludicrous in retrospect. We were taught to breathe using the diaphragm and the intercostal muscles. We spent some time doing exercises - lying on our backs breathing out gently whilst declaiming “I like mine nicely fried in just the right time”, or “The spray of the waves came into the bay where the whales lay the whole of the day”. The highlight of the course was a production of “Journey’s End” on the stage of the Scarborough Opera House. We read the parts from playbooks and played to an empty auditorium.

Since I have been married my wife and I have returned to Scarborough on numerous occasions both for holidays and for short breaks. In the early days when our daughter was a small girl we could not afford an expensive holiday and we booked a week’s holiday in the North Bay at a boarding house which described itself as a private hotel.

My wife, small daughter and I were met by the proprietress, who wore an overall and a knotted dust cap, which partly concealed hair curlers. Resembling Hilda Ogden, a character from TV soap opera ‘Coronation Street’ in the 1980s, she sounded more like a chain smoker as she welcomed us and told us our room number. I don’t know if she ever removed the hair curlers or apron, for every morning at breakfast time she was similarly attired. The dining room was on the ground floor but there was a basement below where the kitchen must have been. This fact became self-evident as the lady spent half her time during breakfast shouting down a dumb waiter shaft, presumably at her husband, awaiting the arrival, as if by magic, of the tea, coffee, cereals or bacon and egg as required.

Our shared bedroom was very small and was situated on the top floor of the tall narrow building which had no lift. It was conveniently close to the toilet. In fact the only thing which prevented the toilet from actually being in our room was a thin wall which was far from sound-proof. We three had single beds and mine was closest to the aforementioned wall. As I lay my head on the pillow I could hear clearly everything which took place on the other side of the wall. Numerous people came and went at all hours and this proved a disturbing phenomenon.

The room was at the rear of the premises overlooking a busy road. This also served to assist in an unforgettable experience. Our visit coincided with what must have been the equivalent of a Scottish Wakes Week. The resort was noticeably full during the day, with individuals wearing woolly hats in tartan colours, some in kilts and the recognisable Scottish accents being spoken everywhere in the town. After closing time, the emptying of the pubs coincided with the fish and chip shops suddenly becoming full of singing Scotsmen. Shortly after this many were singing in the streets. When at last the streets were empty, the roads and pavements were littered with plastic trays, remnants of fish and odd pieces of batter, chips and little wooden forks. This was the signal for hundreds and thousands of hungry, screeching seagulls to arrive, which happened with a regularity which suggested they had been conditioned into accepting it as a normal occurrence. Most of the noisiest seemed to land on the road behind our hotel. Hence, when the nightly toilet procession had seemingly ended, bladders emptied and flushing discontinued, the comparative quiet was ruined by squadrons of screeching gulls descending upon partially emptied plastic trays discarded by semi-inebriated Scotsmen.

In case you are now thinking that I do not have a very good opinion of Scarborough, let me hasten to assure you that this is not the case. I have spent many happy times there. In Peasholme Park I have shared in the enthusiasm with which the mock naval battle, portrayed by miniature remote controlled versions of warships, was greeted. I enjoyed the illuminated tree walk and I remember taking my small daughter to see giant models of dinosaurs. Contributions have been made to the Cricket Week hosted in Scarborough by some of the greatest Yorkshire cricketers of the past.

My family and I usually go to shows when on holiday and besides listening to Max Jaffa, I can remember seeing Little and Large and Jimmy Tarbuck at the Winter Garden theatre. The ice cream parlours near the harbour have been visited by us on many occasions. At the south end of the front I can remember my little daughter insisting on going into a little maze that had been constructed and getting well and truly lost therein.

The care and attention given to all the flower beds, lawns and bowling greens is something to be praised. The Italian Garden at its best is a magnificent sight and is at all times a haven of peace and rest.

Other unforgettable sights remain in my memory. Amongst these, the magnificent view from the obelisk on Oliver’s Mount is prominent. The castle remains to dominate the headland between the bays. When the tide goes out, lots of little pools remain among the rocks where it is possible to search for primitive marine life. Sea mist and fog is not infrequent. On these days the monotonous fog horn repeats and adds to the eerie feeling produced.

On such a day my wife, small daughter and I were on the beach. My wife was scanning pebbles searching for particular types, I was day-dreaming, being absorbed in the overall effect and Susan was playing on the edge of the sea, splashing about and running to and fro. I tried to recapture the scene in the following poem.

SCARBOROUGH
The radiation fog drifts in - drifts in from sea across the sand
And salty mist obliterates from sight the nearby land.
The needle’s vague shape from high on Oliver’s Mount
Brings momentary thought of men too numerous to count;
But whilst perceiving them, the images shroud themselves in mist,
Elizabeth scanning pebbles on the beach now looks for schist.
Just as ancestral memory apprehends those signals it abhors -
Recognises fright which comes from heavy monstrous snores -
So the dreary monotone evokes in me the semblance of a fear
And a possible tragic omen is in the sound I hear.
My daughter dancing in the waves thinks it’s fine
And saturates her pantaloons with icy brine.