The year was 1978.   I was living with my French husband in southern France, near the small town of Cognac.   I was hired by one of the many cognac companies, Cognac Camus, to promote in duty-free shops internationally.   Usually, I was sent to big airports like London, Madrid and Frankfurt. This time I was surprised to find my next trip was to Amman, Jordan.

Three months earlier, I had been on assignment in Israel, so I needed a new passport without an Israeli stamp in it.  I could not see the need to promote alcohol in an Arabic country, but was happy to go to such an exotic place. There was not much air traffic, and not many tourists either. So, I spent lots of interesting hours with the charming, young girls who were working at the brand-new duty-free shop. We had wonderful picnics, lots of laughter, and great music. Somehow the conversation turned to having kids.   I mentioned that I was on a waiting list for adoption, but that it could take ten years or more, so I preferred to work and travel in the meantime.

Shortly after, I was asked into the office of Jabra, the manager of the duty-free, and asked if I really wanted to adopt children.  He explained that his friend, Monsignor Raouff, head of the Catholic Church in Amman, was desperate to find a family for a little boy.  Two minutes later we were off to the women's hospital.   There, in a crowded hall, were many patients surrounded by family and some overworked, tired-looking Italian nuns.  The nuns explained they had a three-month old boy lying in a dark corner who refused to eat and needed love and a family. That is how I met Robert.  He had a big IV needle in his foot - the only way to feed him. On his shaven head were many needle marks, but the veins had been too small for the IV.   I cried and my heart went out for that beautiful sweet baby.   I fell in love.   I had no extra money, only ten days in Amman, and no proof that I was married.  There was no way I could adopt him.

But miracles do happen. At a meeting with Monsignor Raouff, he promised the church would take care of paperwork and costs.  I was blindly naive, and in love with a little black baby boy.   I couldn't think straight.   I tried to call my husband, but the phone lines were so bad, he didn't get my message.   I sent a telegram.   The woman at the post office tried to copy my French words, my husband received it, but all those Arabic words mixed in with bad French made no sense to him.   I went ahead and bought a baby-carrying basket, some clothes, diapers, and milk bottles.   I was in heaven.   Every day I took a taxi to the hospital to visit little Robert, to give him love, and tell him that he will have a loving family. He started to accept the milk bottle when I was there, but he was very undernourished. I never thought about what would happen if he died during the trip back to France, or later.

The evening before my return trip, I got a call from the French embassy.  The agents explained that even a baby needs a passport to travel.  This had never crossed my mind.  So, we went to have tea at the house of a pharmacist and his wife, a British air stewardess, where Robert´s mother worked as a nanny. There we would take the passport of Robert´s mother, Theresa, as she had him registered in her British passport.  I learned that she had two other little boys back on Mahé, the biggest island of the Seychelles, but no husband. She sent her paycheques home to her mother, for the kids.

Theresa had decided to work in Amman after finding herself pregnant again.  Theresa`s mother should never find out about little Robert.   Theresa was happy to learn Robert Francis would be living far away in France.  The agents gave me the original adoption papers in Arabic, plus a translation in French, with all the official stamps.

The next morning, Jabra and I picked up little Robert at the hospital and drove to the airport.  Here, Jabra laughed and joked with the customs agent, also a friend, and pushed me through the line without mentioning Robert, in the little basket. Now through customs, he gave me Teresa's passport and said, once in Paris I had to give it to the pilot who would return the same day to Amman. That made sense to me, until we arrived in Paris.

The customs officer in Paris told me that it is illegal to travel with somebody else´s passport, and that the passport would not be stamped, but returned via the pilot to Amman. But when he told me that I would have to go to prison and the child would also be returned to his birthplace, even though he was not a citizen of Jordan, I cried.  Robert also cried for all those four hours there.  I argued he would die and it would be their responsibility.  We sat there while the agents called important people at the ministries of the interior and exterior, but nobody had a solution.

My husband had come to Paris, feeling that something important was going on. I could see him, but not go through customs to talk to him.   It was a nightmare.
​
At midnight, a new agent came in for his shift and was briefed about our tragedy, He told me he too had a little baby at home and that I should just go very fast through customs while he looked the other way.

Thus ended this nightmare, on our 4th wedding anniversary, in Paris, and we were a happy little family with a strong little boy who brought us so much joy. 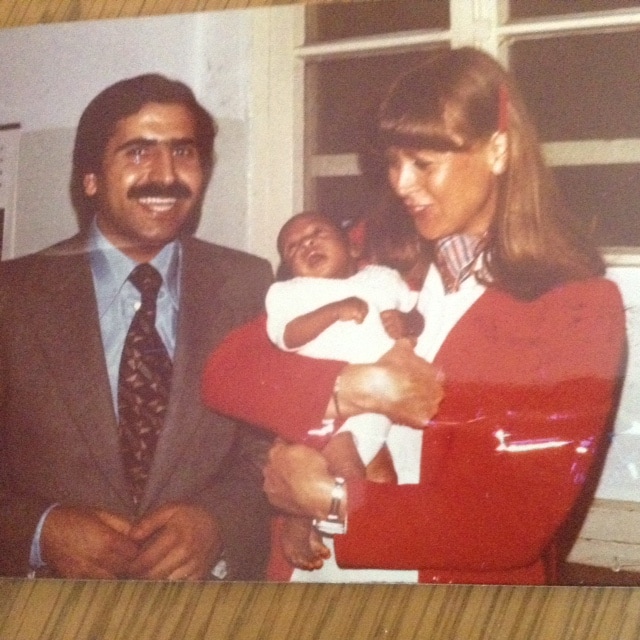 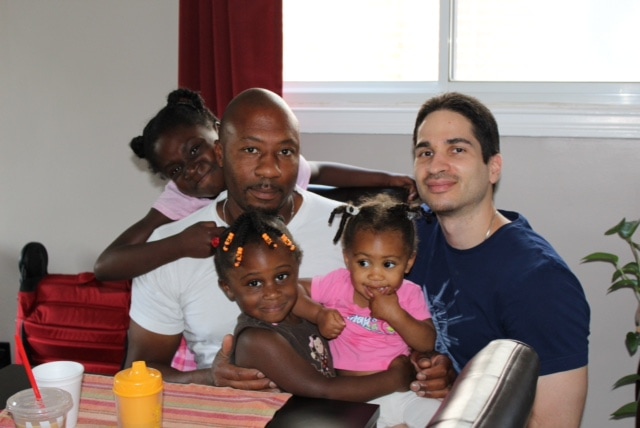 ​Robert today with his 3 daughters and his brother Vincent, also adopted
​
Add your comments about this story on the Blog page.
​